Close to the end of the Tour de Bobkowski 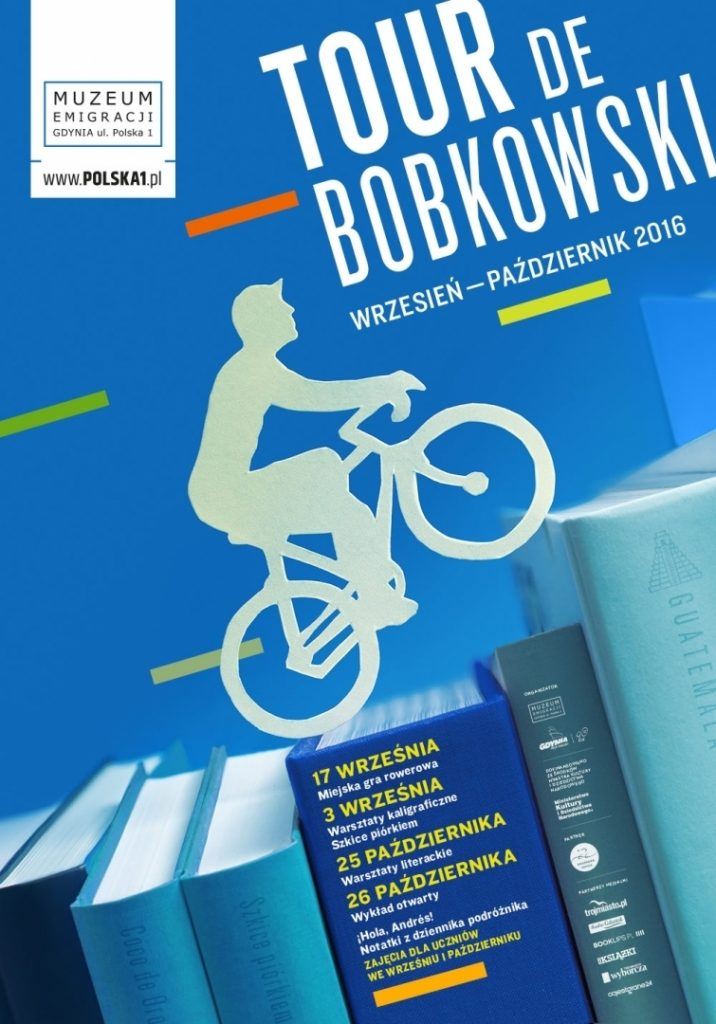 Literary workshop on Andrzej Bobkowski’s Sketches in Ink on 25th October and a lecture on the autobiographic thread in his war diary on 26th October will conclude the series of events devoted to the famous writer at the Emigration Museum in Gdynia.

The Emigration Museum in Gdynia has been introducing the emigrant writer Andrzej Bobkowski since the beginning of September. Calligraphy workshops as well as a cycling urban game and a number of activities for schoolchildren as well as families with kids were organised as a part of Tour de Bobkowski. The project is being conducted as the rich collection of the writer’s diaries, stories, photographs and letters at the PIASA (Polish Institute of Arts and Sciences of America) are being digitalized by the New York institution in cooperation with the Emigration Museum.

At the end of Tour de Bobkowski, on 25th October, you can find out more about the writer’s art during literature workshops. They will be conducted by Maciej Nowak PhD, who will also invite you to an open lecture on the following day. It will be devoted to Bobkowski’s complicated emigrant fate and the secrets of his unique style.

Literature workshops: How is Andrzej Bobkowski’s war diary made

It is compulsory to sign up for the workshop at: warsztaty@muzeumemigracji.pl

The workshops will be devoted to Andrzej Bobkowski’s war diary. It is a long cycle of the writers notes, which he kept from September 1939 to November 1946. Some of them were lost, however nine large notebooks have been preserved. Currently they are at the Polish Institute of Arts and Sciences of America (PIASA) in New York. Those which were written in France, during German occupation became the basis of the cult Sketches in Ink – Bobkowski’s most famous book. The workshops will be conducted by Maciej Nowak PhD of the Catholic University of Lublin, the author of the monograph On an arc. About Andrzej Bobkowski’s writing. They will show what the author’s war diary was like and how it was made.

The diary Adrzej Bobkowski kept while in France in 1939-1946 was not only a record of current events. What makes them different from the later Sketches in Ink is a strongly emphasized autobiographic thread. The author made notes of current events, combining them with stories about situations which happened at different moments in the past. Therefore, keeping a diary became an opportunity to make a personal history reconstruction, which could be interpreted as stabilization of identity. Bobkowski’s childhood and youth memories entwined in the dramatic events of German occupation as well as the reflection on his inner evolution make Bobkowski’s original notes show us his other face which we have not known so far.

The lecture will be given by Maciej Nowak PhD of the Catholic University of Lublin, the author of the monograph On an arc. About Andrzej Bobkowski’s writing.

On the project of Andrzej Bobkowski’s work digitalization

The Digitalization and Promotion of the Collection of the Polish Institute of Arts and Sciences (PIASA). Stage 1: Andrzej Bobkowski is an interdisciplinary research and education project whose purpose is to digitalise the author’s manuscripts which are kept at PIASA in New York as well as promotion of both the work and the figure of the eminent emigrant writer. It was also to make scans of the archive material and to make them available.

The digitalization process in New York has just finished. Over 3000 scans were made – the entire Andrzej Bobkowski’s collection was digitalised. Dr. Maciej Nowak PhD of the Catholic University of Lublin, a researcher and publisher of Bobkowski’s texts is preparing a critical study of the manuscripts which were the basis for the publication of Sketches in Ink. Next year, the Emigration Museum in Gdynia will publish a printed version of the manuscripts. Readers will get Bobkowski’s diaries without a transcription – as reprinted scans. It will be a unique publication with an academic commentary, which could be referred to as a material monograph of Bobkowski’s diary written and preserved abroad.

Andrzej Bobkowski (1913-1961) escapes simple definitions. He could be called a writer, however, the name of a careful observer and commentator of the 20th century reality suits him best. He published some stories and sketches, however the diaries as well as the rich correspondence, in which we can read his diagnosis of the world of his times. What is more, he expressed it in a form, which proves he was a master of words. Bobkowski spent the years of World War II in France. Sketches in Ink. France 1940-1944 are the result of that time. From 1948 until his death, Bobkowski lived in the remote Guatemala, where he never ceased to keep his diaries or exchange letters with Jerzy Giedroyc, Tymon Terlecki or Jarosław Iwaszkiewicz.

The project was co-financed by the Ministry of Culture and National Heritage.