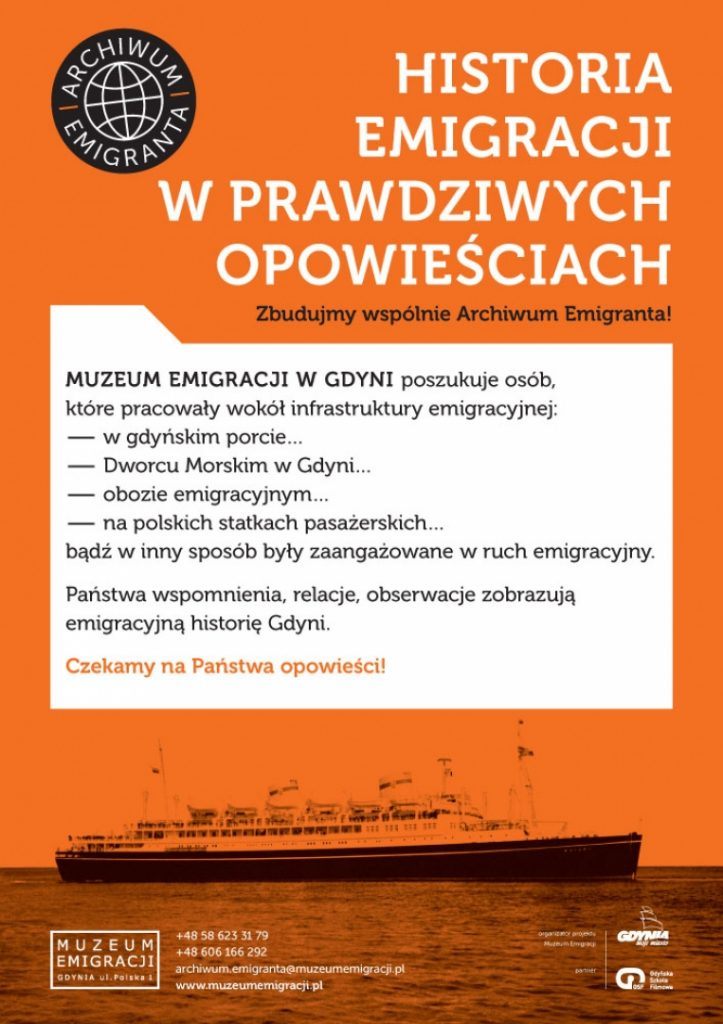 The history of emigration in true stories
I stage of the project | January – June, 2013

We’re launching the first stage of the Emigrant’s Archive project. Its goal is to collect memories of emigrants and the workers of Gdynia’s port and emigration infrastructure. Using this opportunity, we encourage you to share your stories with us! Accounts of those who travelled away, as well as of those who organized those trips, will be registered in cooperation with the Gdynia Film School. The history emerging from your accounts of emigration will form part of the long term project focused on archiving and the popularization of past and present emigration stories.

Stories gathered in this project will establish live tissue for the planning of the program activities of the institution. It is our desire to present the history of emigration from the perspective of those who experienced and witnessed it, and those, whose relatives remained in exile.

“We want to find out who were the people that decided to leave their homes, jobs, relatives. What were their last thoughts before setting off, what memories – but also dreams – they took with them. We are also interested how they managed in their new country, new society, new economy, new – often exotic – culture. We wish to reach those people to save their moving and unusual stories from oblivion” – announced Karolina Grabowicz-Matyjas, Director of the Emigration Museum.

The emerging image of emigration-era Gdynia will be completed by accounts of sailors, ship doctors, stewards, barmen, entertainment officers of famous Polish ocean liners, as well as other people involved in the passenger traffic – they will allow us to rebuild Gdynia’s emigration infrastructure.

“The Marine Station in Gdynia saw thousands of people set off on their transatlantic journeys to new countries onboard the legendary Polish ocean liners, such as “Batory” and “Stefan Batory”. Besides the emigrants’ stories, we are also interested in the observations, thoughts, and memories of the employees of the ocean liners, the Marine Station, the Emigration Camp and the quarantine hospital that completed Gdynia’s emigration infrastructure. During the first stage of the project, we would like to encourage people from Pomorze to contact us – subsequent phases include national and international searches. Naturally, we won’t narrow down our searches to maritime emigration – each story is valuable to us.” – said Sebastion Tyrakowski, the coordinator of the project.

We are waiting for your stories!

The Emigrant Archive is a lengthy undertaking and it consists of multiple stages. During the introductory phase (from 2010 to 2011), we filmed a couple dozens of interviews on three continents – in the United States, Australia, France, Great Britain, Czech Republic, Hungary and Romania, among others. As part of the first stage of the project – beginning in January 2013 – in Pomorze we will register with the Gdynia Film School interviews with people who experienced emigration, and those who witnessed it as employees of the Gdynia emigration infrastructure.The second stage – organized in Warsaw – assumes interview invitations of distinguished persona of Polish science, culture, sports and business, whose biographies feature experiences with emigration. As part of the following stage of the Emigrant’s Archive, audio interviews with other emigrants and their relatives will be organized on a national scale. Other stages include international activities – trips to register interviews abroad. Emigrant’s accounts will be registered in text, sound and motion picture, and used in exhibition activities, multimedia and printed publications, as well as electronic archives available online.