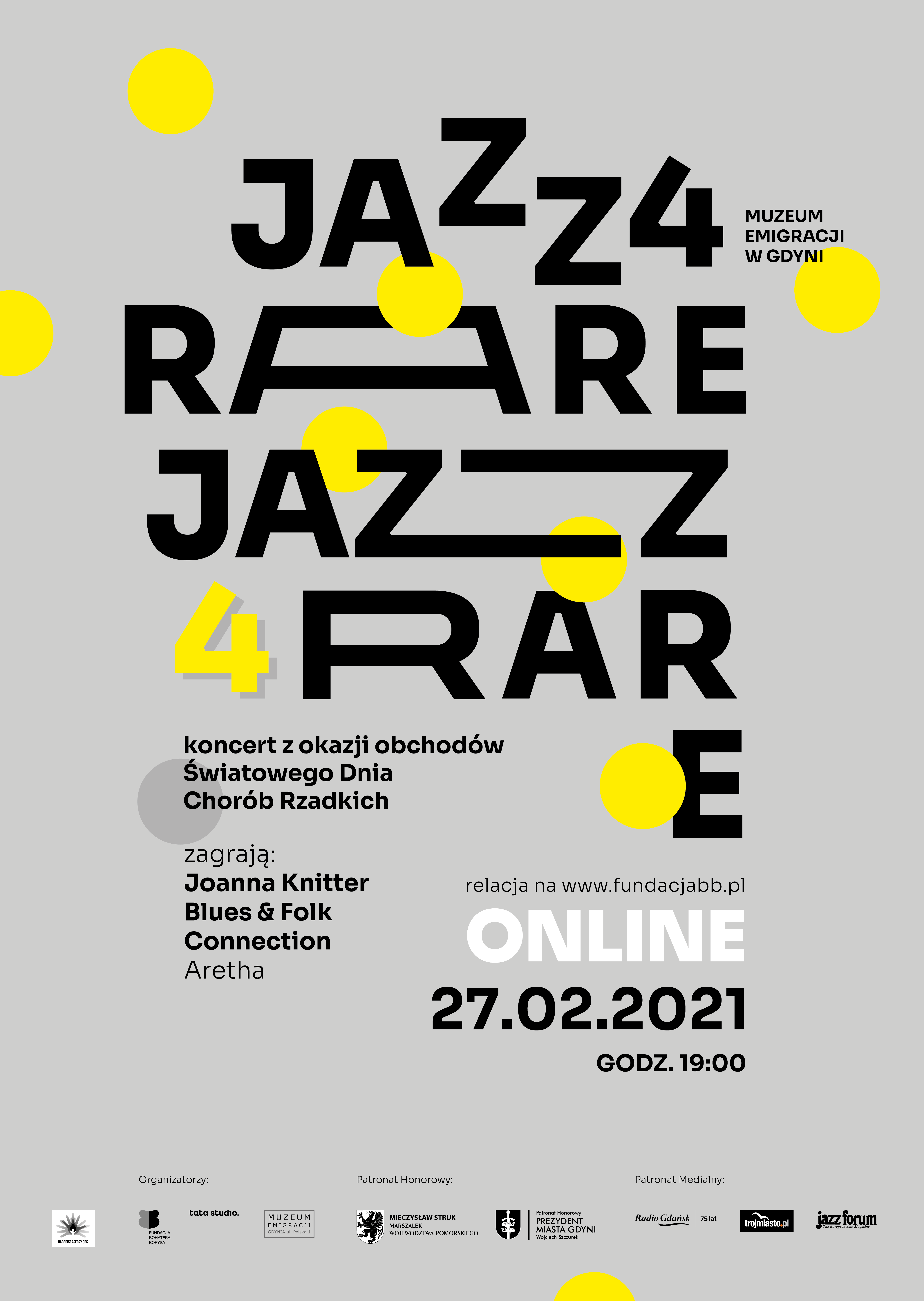 Every year, on the last day of February falls the World Rare Disease Day (RDD). All activities undertaken under RDD are aimed at raising public awareness of rare diseases and challenges facing people and families affected by them. This year, for the second time in history, the JAZZ4RARE 2021 online concert will take place in the Tri-City, first time in Poland and maybe even in Europe!

Why jazz? In our opinion, jazz has a positive effect on the body and soul, including those affected by rare diseases. The second premise is that jazz music is often improvisation, it is a mixture of talent, knowledge, happiness and intuition. It is a constant step on the undiscovered land, exploring the unknown, it is often improvised expeditions in an unknown direction, just as the heart and mind tells. It’s exactly the same with rare disease activities, and since jazz and rare diseases have so much in common, why not combine them?

Why the Emigration Museum? Again, drawing on our own experience, we know that the diagnosis of a rare disease heard by the child’s parents is both the end and the beginning, a peculiar moment of the turning point that closes one stage and opens another, which is a kind of journey in the search for therapy, treatment or stabilization. In the overwhelming majority of cases, it is a journey into the unknown, without a clearly defined direction – it is emigration from the comfort zone to a new life, living with a rare disease. Therefore, there is no better place than the Emigration Museum in Gdynia to combine jazz and travel into the world of rare diseases.

As part of this year’s edition of JAZZ4RARE 2021, February 27 at 19:00 at the YouTube’s channel of Emigration Museum we will hear:

The event will be hosted by Kamil Wicik.

We invite you to emigrate to unforgettable jazz states of mind filled with good dedicated to people and families affected by rare diseases.

The concert’s organizers are: The Borys Hero Foundation, Tata Studio and the Emigration Museum in Gdynia

The Aretha project was created in the mind of Joanna Knitter long before Aretha Franklin’s death, but as usual, it was not easy to implement. In the end, however, it worked and thanks to the help and passion of the guys from Blues & Folk Connection, we can listen to blues versions of the greatest hits of the Queen of Soul, incl. Respect, Chain of fools or Natural woman.

Krzysztof Paul, who plays the guitar, makes the songs gain a characteristic blues-rock claw, while Artur Jurek holds them in gospel reins (thanks to Hammond’s organs). When you add a reliable, sensational rhythm section in the form of Adam Żuchowski and Piotr Góra – you don’t need much more. Well, maybe a voice that will somehow connect it all. And as far as that voice is concerned, we will use the review by Czesław Romanowski, written after the premiere of the new material in the Żak Club of Gdansk: “Knitter feels very comfortable on stage (…), he is a volcano of energy, sings with his whole body (…). interpretations of “Respect”, “Think” or Paul Simon’s poignant, Franklin-style song “Bridge Over The Troubled Water” make you shiver.