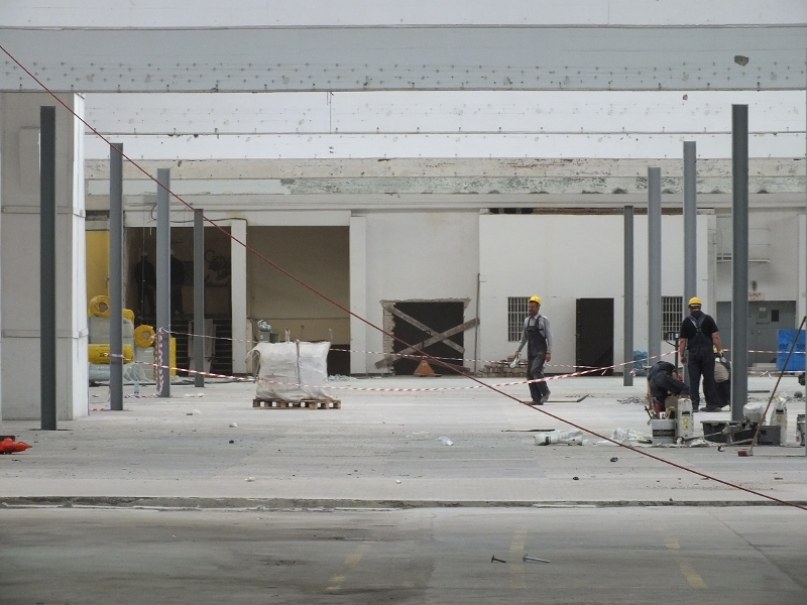 The future seat of the Emigration Museum in Gdynia is currenty under intensive renovation and adaptation works.

The future seat of the Emigration Museum in Gdynia – the Marine Station together with the adjacent Transit Warehouse – is currenty under intensive renovation and adaptation works.In May, MARBUD – the company chosen in a tender – began their investment activities. They are scheduled to conclude by June 2014.The works will advance on various fronts simultaneously; however their effect is most visible in the reconstruction of the North-Western part of the façade, which was destroyed during wartime bombardments.The Marine Station – situated by the water in the port of Gdynia – is gradually recovering its original, impressive form.This, the only emigration museum in Poland, will begin operations at the beginning of 2015.

The institution’s headquarters features two interconnected buildings – the representative Marine Station, planned to house a cultural and entertainment center, and the adjacent Transit Warehouse with permanent and temporary expositions located on the upper floor.In order to tell the story of Polish emigrants at its source, the historic building (within the limits of heritage conservancy) needs to be adapted to the requirements of a modern and multifunctional cultural institution.This is compounded by the industrial environment of the port of Gdynia, which covers well above 6 000 square meters and will be a true hub of culture and entertainment whose activities will stretch far beyond those of a traditional museum.

The Marine Station – built in 1933 in order to service passengers from all over the country – was severely destroyed during World War II.Today we witness its transformation.The disfiguring gap, which disrupts the harmony of the North-Western façade of the building, will be replaced with a storey of the building that is currently missing.The structure of the stairway is already visible from outside.Inside, one can see the reconstruction of the gallery that encircled the monumental main hall before the war.In the future, this part of the reconstructed floor will host a restaurant with a view to the sea.All works concerning the reconstruction of the façade, including the replacement of the skylight in the Station’s dome, are scheduled to begin before the winter.Window woodwork has already been replaced, together with other skylights and outer roofing. Walls marking the new layout have been placed according to the new functions of future Museum halls: administration, programming, and commercial activities.

Module structures are being erected in the exhibition space of the Transit Warehouse, where the permanent exposition will be presented.This serves as an optimal architectural solution for proper exposition conditions, as well as for protection of the original structure of the historic building.Sophisticated installation works, necessary for use of multimedia in exhibition activities, have also began.

The Marine Station will be restored not only to its original body.The investor – the city of Gdynia – will also make an effort to ensure that the building’s details and interiors recall the most glorious times of its most representative edifice.Simultaneous to renovation works, consultations with the heritage conservator are being held on the subject of restoration of the impressive entrance doors, flagpoles, and eagle bas-reliefs that adorned the front façade of the building before they were torn down by German invaders.A team of experts is working on the restoration of other details from the 30s – wall lamps, memorial plaques, mosaic floors, and balustrades.

Thanks to investments of the Port of Gdynia, the immediate vicinity of the Marine Station will also be rebuilt.Access to the building will be improved with new sidewalks, cycle paths, and new paving on Polska Street (from the roundabout on the Chrzanowski Street to the Gombrowicz Square).Green areas around the building will be arranged and parking space for 210 vehicles will be constructed.The Emigration Museum in Gdynia will also take care of creating a suitable, ornamentative road signs indicating to direction to headquarters.