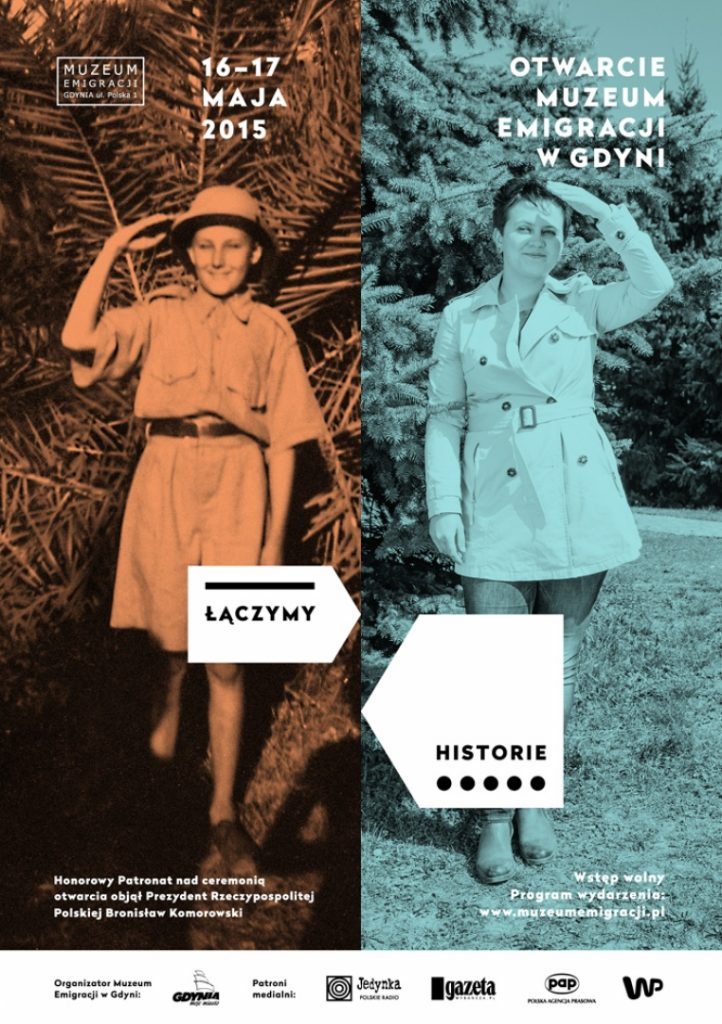 The history of Polish emigration has many faces – the only museum in Poland dedicated to this subject will open its doors on May 16. Right away, its faculty extends an invitation to learn more about two biographies exemplifying different emigrational experiences. As a teenage boy, Jerzy was taken along with his family to the east during World War 2. For seven years, he wandered from Kazakhstan to Africa. As did 2 million other Poles after Poland joined the European Union, Agnieszka decided to look for new experiences abroad. Both biographies contain an experience of emigration – one that is unique and personal, but also part of an important social phenomenon. On May 16 in Gdynia, emigration will be presented in all its complexity by our new exposition.

As a teenage boy, Jerzy Tomaszek was taken with his family to the east. He was transported together with Polish officers who were later murdered inKatyn. After the signing of the Sikorski-Majski agreement, he managed to escape with his siblings, thanks to the enormous determination of his mother. He began a journey that led him from Kazakhstan through India to the African camps for Polish refugees. Full of dangers and hardships, this journey left a permanent mark on his life – today, he claims that road has hardened him both physically and mentally.

Jerzy Tomaszek’s story is just one of millions of tales related to the very complex and centuries-old history of Polish emigration. After seven years, he was offered the chance to return to his homeland and he took it. Others stayed abroad forever. They left Poland for various reasons – economic and political ones among them. As a result, there are over 20 million people of Polish descent in the world today. Numerous Polish communities can be found in the United States, Canada, Brazil, Germany, and France, but the footprints of our compatriots have marked all continents.

Migrations are a common phenomenon in the modern world. After Poland joined the European Union, over 2 million Poles chose to emigrate. Modern means of transportation and communication, as well as open borders, have redefined the notion of emigration, which has a different dimension than in the past. Such was the case of Agnieszka Imbierowicz, who – after many years of seasonal trips to Great Britain – decided to settle down in the Netherlands two years ago. In her own words – she didn’t leave “for bread”, better education, or because she missed the sun. She left because she was curious about other lifestyles. She was looking for new experiences.

These two very different stories of Agnieszka and Jerzy show us how complex and multicolored our common past and present really are. Different times, different reasons for departure, different destinations, and different emotions related to it all serve to better delineate the underlying question about the Polish identity. Warm encouragement to answer this question comes from this institution, which has set out to speak of this phenomenon from the perspective of the people who experienced it. We find it very important to shape the museum together with emigrants themselves – remarked Director Karolina Grabowicz-Matyjas – and that is why the invitation to its opening is accompanied by the stories from Jerzy Tomaszek and Agnieszka Imbierowicz, who committed themselves personally to the mission of the museum via the Emigrant’s Archive program.

For several years now, the institution has been implementing various projects enabling others to join in its activities. The aforementioned Emigrant’s Archive is one of them – it collects the personal accounts of emigration, registers them, and presents them to a wider audience. Several hundred of them have been collected so far. Every voice is equally important as each of them deepens our knowledge of our common heritage and modernity, and allows us to understand each other better. The action of collecting emigrational memorabilia entitled “Objects with History” is similar in that respect.

This new institution – housed in the historical Marine Station, from where ocean liners once carried passengers to United States – is to be the meeting place of Poles at home and those abroad. And it will take on this new role, quite literally, right at the opening ceremony, as both Jerzy and Agnieszka will attend. There is a good chance that under the address of Polska Street no. 1, Gdynia, the special mission of the Emigration Museum in Gdynia – to connect not only the stories, but also the people behind them – will acquire a new and special meaning.

Honorary patronage over the grand opening is provided by Mr. Bronisław Komorowski, President of the Republic of Poland.