A meeting with Ewa Winnicka 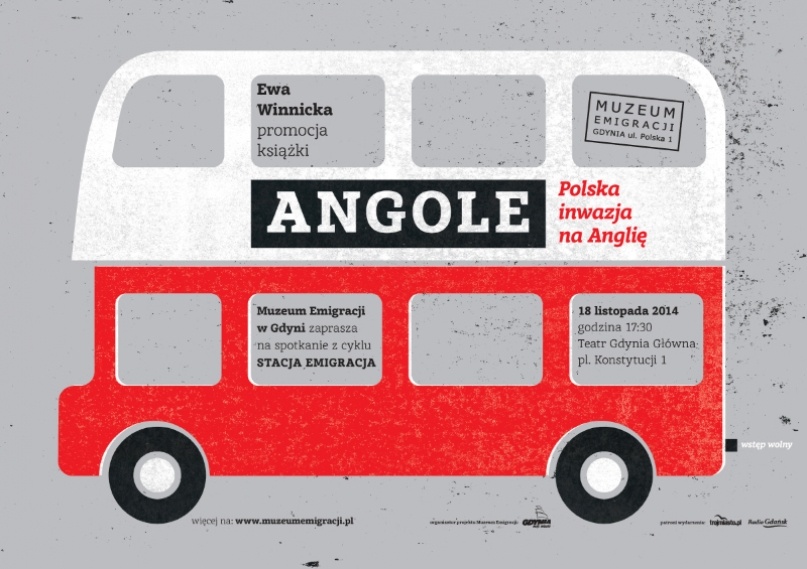 As part of the “Emigration Station” series, we would like to invite you to a meeting with the author of the book „Angole”.

The Emigration Museum invites you to a meeting with Ewa Winnicka, an outstanding reporter and author of the new book entitled „Angole” [eng. The Brits – trans.]. Winnicka’s report gives the floor to several dozens of Pole, who had relocated to the British Isles during the so-called new wave of emigration – experiencing a streak of professional successes and failures. It is a very current and multilayered tale about the encounter between Polish emigrants’ hopes with British mentality, culture, and law. The meeting, as well as a discussion about the various faces of Polish migrations to the UK, will be moderated by Dagna Kurdwanowska.

During the event, participants will have the chance to purchase the book at a discounted price.

Alongside our own most sincere recommendation to read the book and to participate in the meeting, we would like to quote Małgorzata Szejnert’s review:

What is an Englishman to a Pole? What is a Pole to an Englishman? Ewa Winnicka had listened to several dozen Polish “invaders” to the British Isles. They told her about the pitfalls they had encountered, how they managed (or failed) to deal with them, how they prevailed (sometimes with style), and how they fought for (their own and others’) labor rights. It is a relevant, serious, but also very witty report for everyone, especially those who are about to go. Estimates claim some two millions have gone already.

British press occasionally publishes articles about the so-called „Polish invasion” to the British Isles. Indeed, according to conservative estimates, some 700 000 Poles have emigrated there within the last decade. Some say the number is in fact closer to a million, others – two-million. Ewa Winnicka traveled across Great Britain engaging “invaders” from all walks of life. She asked Polish intellectuals, workers, small-time entrepreneurs, students, and homeless people for their view of the country. Each of the stories presented is a stand-alone movie script. Above all, “Angole” paints an ambiguous picture of natives – the citizens of Great Britain – one painted with hope, but also disappointment, admiration and neglect, and finally – with the successes and failures of Polish “settlers”. It is a wonderful continuation of “Londyńczycy” [eng. Londoners – trans.] – half a century later and in a world without borders.