Artists in the face of migration flows 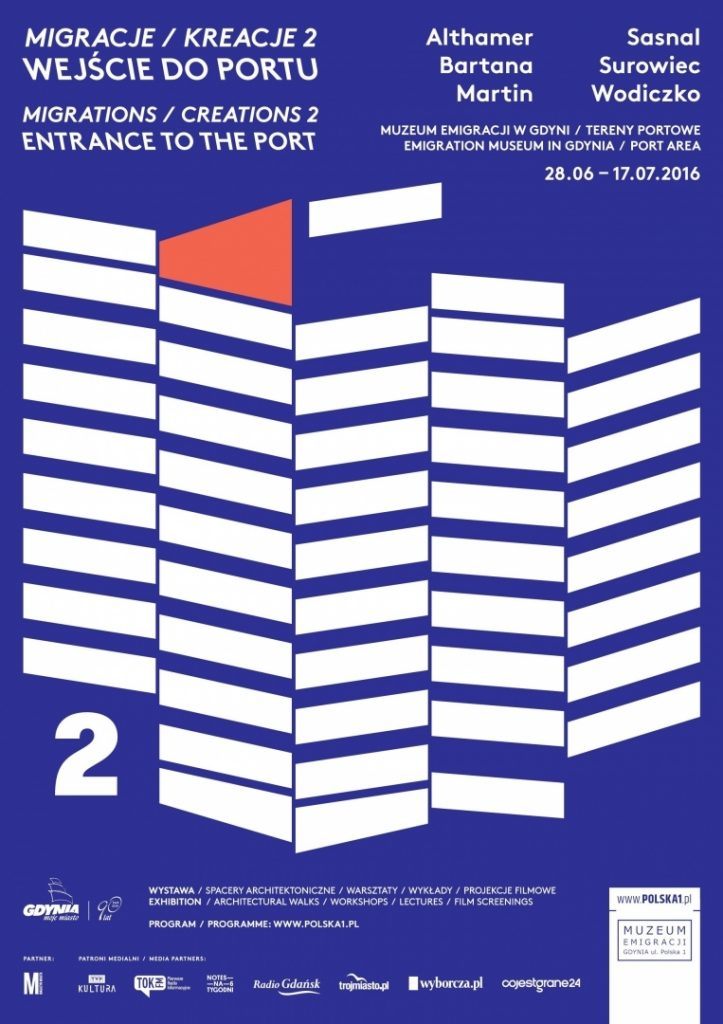 What do some of the world famous Polish visual artists say about the consequences of today’s migrations? The second edition of the Migrations | Creations artistic project in June and July 2016 will provide a chance to find out. Pieces by Wilhelm Sasnal, Honorata Martin, Łukasz Surowiec and an Israeli artist, Yael Bartana will be presented in the industrial spaces of the Gdynia port. The works of Paweł Althamer and Krzysztof Wodiczko will be presented inside the Emigration Museum. Guests, a project by Krzysztof Wodiczko, will be presented in the Open’er festival area.

Migrations | Creations are an artistic dialogue, which addresses one of the subjects which attract heated discussions – the modern migrations. The second edition of the project looks for answers to the questions about the status of migration in the world, in which moving around is very easy, thanks to the modern technique, but there is the eternal mistrust or even hostility towards strangers. The pieces by the famous artists portrait not only the modern nomad, but also the inhabitants of the place in which he or she arrives.

The location of the project is not random. Gdynia is a city, which was built by migrants. Thousands of Poles emigrated via the Maritime Station, where the Emigration Museum is located now. The works prepared especially for the event comment on today’s migration themes and focus on their social aspect. Locating Migrations | Creations in the Gdynia port, which used to have an elaborate service system for the emigrants is a voice in the discussion on today’s migration flows. The invited artists seek an answer to the questions on how to start a dialogue on the integration of a “stranger” in the current geopolitical situation. Krzysztof Wodiczko’s project Guests will be additionally presented to the international audience at the Open’er festival, as a part of the GDYNIA ZONE. After the festival, you can see it at the Emigration Museum, at 1 Polska Street.

The programme, which accompanies the exhibition is focused on the relation between space and migration – the way the migration flows impact urban planning or how cities plan to locate the arriving migrants in their space. The meeting on humanitarian architecture will focus on the architects’ work in the face of the migration crisis in the world, based on the example of the Za’atari refugee camp. It will be compared to the history of the emigration station on Ellis Island and the building complex of the emigration camp in Gdynia, which was build in the interwar period. After the screening of short films by JR, a French artist who is famous for the use of large format photographs in the city space, we will be able to talk about how street art addresses the problems of migration.

The motto of this year’s edition of Migrations | Creations is “Entrance to the port”. The industrial spaces of the Gdynia port, which are a natural background of the project are also its theme. The walks around the objects of industrial architecture will allow you to discover the connections between the history of the place and its contemporary aspects. People came to Gdynia, as they were encouraged by the vision of a “new city”. They were looking for a better life and they saw it as a stop on their way into the world. As they were building Gdynia, they shaped its identity of a city which was open to the world. The route of the architectural walks with Anna Orchowska-Smolińska, an architect, as a guide, will let you discover the changing functions of the buildings in the port district of Gdynia and get to know the stories of the ones, which do not exist any more, like the port water tower or the Aukcje Owocowe Warehouse. It will be a unique occasion to visit a working port, which has never been explored by wider public so far.

A trip exploring the culinary traditions of the home countries of migrants who live in Poland will complete the Migrations | Creations. Conflict Kitchen will show how to innovatively combine food and social activity. It is a mobile restaurant and a social enterprise, which will move to the Emigration Museum for two days, to serve dishes from the countries which are facing war.

The admission to all the events is free.