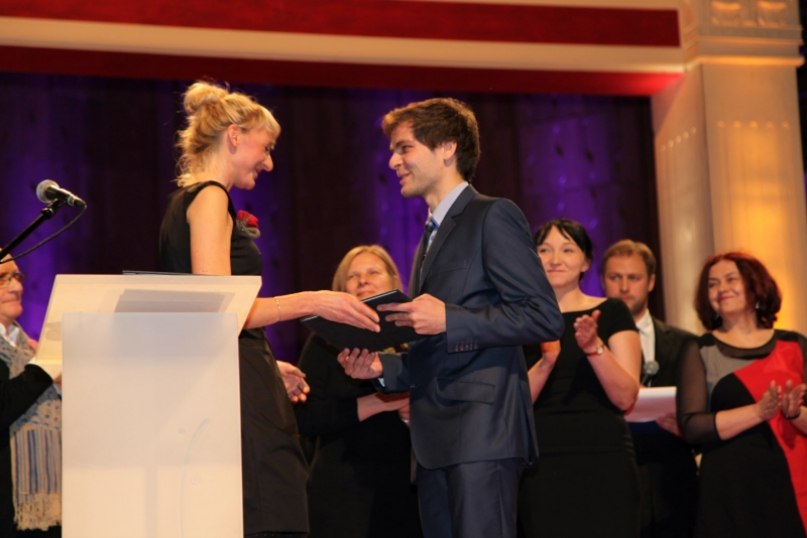 On December 2, during the Great Splendor gala, the laureates of the „Horizons of freedom. Emigration – perspectives” contest received their awards.

On December 2, during the Great Splendor gala at the Lutosławski Concert Studio of the Polish Radio in Warsaw, awards were presented for the “Horizons of freedom. Emigration – perspectives” contest for an emigration themed radio play script.The awards were presented by Karolina Grabowicz-Matyjas, Director of Emigration Museum in Gdynia, and actor and member of the jury Wojciech Pszoniak.

Piotr Subbotko’s “Stella” was the winning script and its author was awarded 3 500 PLN.Damina Słowioczko’s “Unsent Letters” placed 2nd and was awarded 2 500 PLN, whereas 2 000 PLN was awarded to 3rd place – Anna Nasiłowska’s and Magdalena Wlekilk’s”An Agent of Freedom”.Honorable mentions were awarded to “12 months: A Fairy Tale” byMaciej Wojtas, and “One Misty Morning” by Hanna Kowalewska.Both authors received 1 000 PLN.All these awarded works will be produced as radio plays and broadcasted by Polish Radio Program 3 starting in January.

The contest was organized by the Emigration Museum in Gdynia, in co-operation with Polish Radio Theatre and Polish Radio Program 3.The task set before the participants was to tell a story about modern, oftentimes young, emigrants – their lives andperspectives.Jurors included: Janusz Kukułka – Chief and Head Director of Polish Radio Theatre; Wojciech Pszoniak – distinguished film and theatre actor; Karolina Grabowicz-Matyjas – Director of the Emigration Museum in Gdynia; and Adam Kamiński – poet, prose writer, and literary critic.They all searched for works that say something important about Poles living outside their homeland – not only about their environment and everyday problems, but also about the universal experience of emigration, about people’s confrontation with their own freedom, about following their dreams, and holding on to their hopes.Our authors did not fall short of our expectations – the scripts they created resulted in a plethora of faces and dimensions of emigration, and it is that diversity that made jurors award additional “honorable mentions” to scripts that fill in a broad panorama outlined by the three winning texts. Horizons were broadened in another sense, too – authors sent their scripts from almost all over the world. Many arrived from Europe, but some from the United States and Australia. We received almost 70 applications.

Not giving up any of the plots, and not spoiling future listeners’ reception, I wish to say only that the radio plays may be interesting to people who experienced emigration personally and to those who see it as a widely remarked social, economic, or historical phenomenon. We hope that they will spark new discussions and interchanges of opinions and personal experiences, and that they draw the attention they all deserve.