Be with us for „Panufnik’s Return” 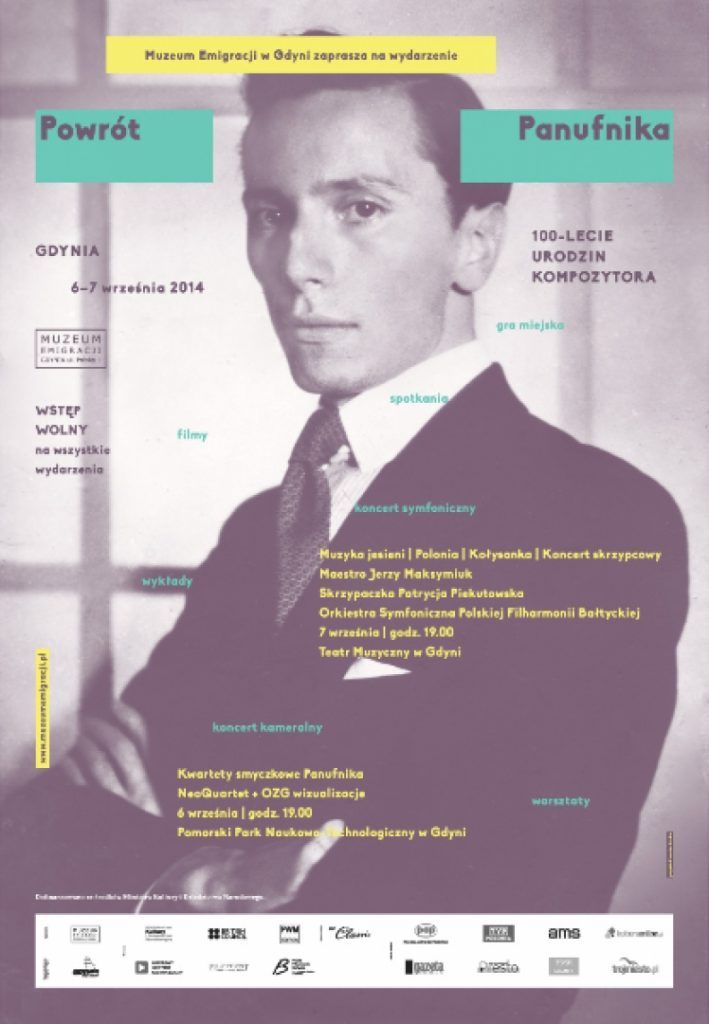 The Emigration Museum in Gdynia announces „Panufnik’s Return. 100th Anniversary of the Composer’s Birthday” and rediscovers this outstanding artist, a 20th century classic, whose excellent works return to Poland on the occasion of the centenary of his birthday. “Panufnik’s Return” is a meeting with the rich, classic, yet simultaneously very modern music of Andrzej Panufnik, which will be presented in a chamber setting – during the concert of NeoQuartet string quartet, as well as in a symphony setting – during the monumental concert of the Symphony Orchestra of Polish Baltic Philharmonic conducted by Maestro Jerzy Maksymiuk. We invite music aficionados, as well as people unfamiliar with the works of Andrzej Panufnik, to discover the original sonic world of the composer as it maintains the traditional musical values, such as melody, harmony, and – above all – the beauty of tone.

The entry to all events is free of charge, we do, however, encourage you to pick up the entry passes for the concert of the Symphony Orchestra of Polish Baltic Philharmonic beginning from September 1 – the concert will be held at the Main Stage of the Music Theatre in Gdynia, which can accommodate 1000 spectators, but the sooner you get your pass, the bigger choice of seats will be at your disposal. The project has been co-financed by the Ministry of Culture and National Heritage. Honorary patronage: Ministry of Culture and National Heritage and President of Gdynia, Mr. Wojciech Szczurek.

We invite you to a unique meeting with Andrzej Panufnik’s chamber music. We will discover String Quartets as performed by the NeoQuartet ensemble, founded by the graduates of the music academies in Gdańsk, Warsaw, and Lucerne: Karolina Piątkowska-Nowicka (lead violin), Paweł Kapica (2nd violin), Michał Markiewicz (viola), and Krzysztof Pawłowski (cello). NeoQuartet specialize in contemporary music and often combine their performances with other arts. On the occasion of the centenary of Panufnik’s birthday they included the composer’s String Quartets in their repertoire, which truly delighted the young musicians.

It is worthwhile to learn the unique and inimitable sound of string instruments in Panufnik’s creative output, as he had been surrounded by music since his childhood – his mother was a skilled violinist who spent hours practicing, his father, on the other hand, was an acclaimed luthier. In String Quartet No. 1 each instrument acquires a certain „human” personality and engage in a lively dialogue: violins shift from aggressive to ironic, the pompous viola discusses with the calm cello. In Messages, the composer returns to his childhood memories, of which he once wrote, “At the age of 7 or 8, I spent my holidays in the countryside and I made a surprising discovery, that when I put my ear to a wooden telephone pole, I can hear mysterious, magical sounds caused by wires vibrating in the wind. I decided to draw from these childhood memories (…) and created a musical language resembling a secret cypher.” String Quartet No. 3 was composed in 1990 and its title „Paper Cuts” underscores how important it was to the artist to return to his homeland after 30 years of emigration – even though the piece does not contain any folklore motifs, the author modeled it on the resourcefulness of Polish cutouts as he resorted to the mirror symmetry of rhythm, melody, and harmony.

The concert in Gdynia offers an enriched form of contact with Panufnik’s music through the multimedia visualizations designed especially for this occasion. Oskar Zamek-Gliszczyński has prepared motion pictures inspired by nature and urban landscapes perfectly corresponding to the rhythm and the melody of the String Quartets.

The entry passes for the chamber concerto will be available for pick-up from 3 pm on September 6 at the Information stand at the Pomorski Science and Technology Park in Gdynia.

The concert at the Music Theatre in Gdynia is a unique artistic event, where for the first time Andrzej Panufnik’s symphonic music will be performed in Gdynia by the Symphony Orchestra of Polish Baltic Pholharmonic, conducted by the outstanding conductor Jerzy Maksymiuk and accompanied by the world-famous violinist Patrycja Piekutowska.

The program of this concert has been developed personally by Jerzy Maksymiuk, who wanted to introduce to the audience the most beautiful compositions of Panufnik, but also chose pieces of great sentimental value to himself. The repertoire of the concert will amaze not only the more seasoned music aficionados, but also listeners who are less familiar with contemporary music. Maestro Maksymiuk has conducted Panufnik’s compositions on multiple occasions and always marveled at their perfect form, construction, and logic.

Autumn Music is a nostalgic, thought provoking composition, perfectly reflecting the atmosphere of this season and the melancholic character of the composer himself. Polonia, on the other hand, commissioned by the BBC, is a perfect example of Panufnik’s attachment to Polish inspirations and the domestic folklore – the composer based this piece on “folk melodies and upbeat, thoroughbred rhythms of countryside dances”. In Lullaby, which recalls the atmosphere of a night stroll by the Thames in London, the composer resorted to the contemporary musical language by using quarter-tones. Violin Concerto was commissioned by the famous violinist Yehudi Menuhin. It was performed in Poland for the first time shortly after the censorship ban on Panufnik’s work was lifted – by the distinguished violinist Wanda Wiłkomierska and under the conduct of no other than Maestro Maksymiuk during the Warszawska Jesień Festival in 1979. This time, her place will be taken by Patrycja Piekutowska – an excellent artist known for many performances of Polish and international contemporary music.