Beyond the Borders of Art. 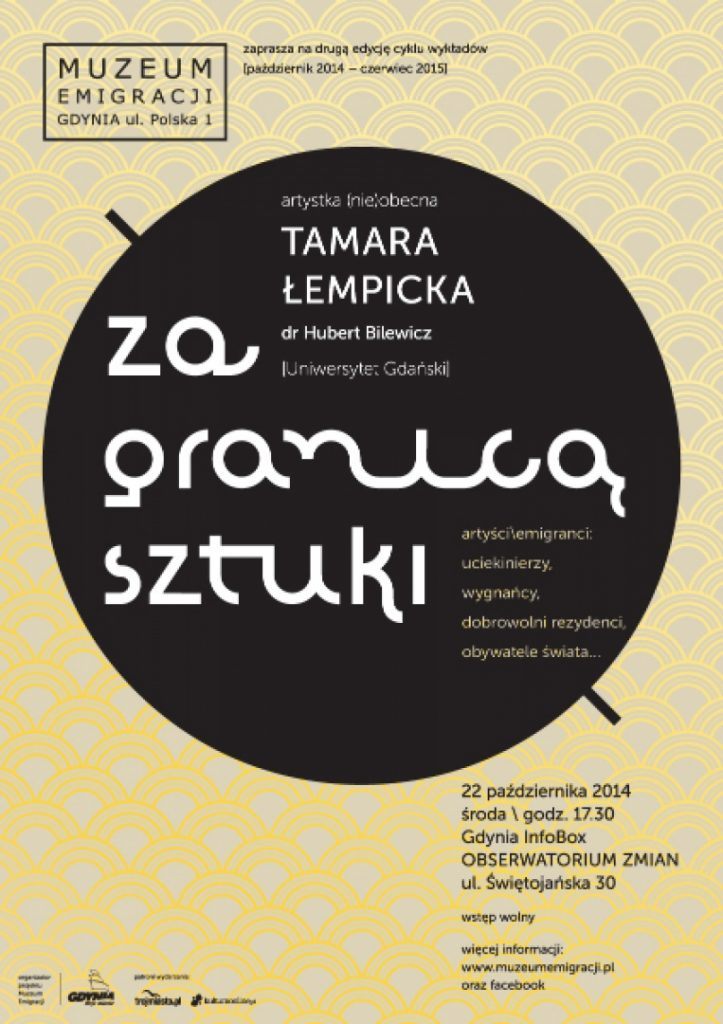 We invite you to the second edition of the lecture series

BEYOND THE BORDERS OF ART
October 22 | 5:30 pm | OBSERWATORIUM ZMIAN | Infobox

With our invitation to get acquainted with distinguished, famous – but also less known – emigrant artists, the Emigration Museum in Gdynia directs its steps BEYOND THE BORDERS OF ART for the second time. The cycle of eight lectures will bring us closer to the artistic fates of those creators, who willingly chose – or were forced to choose – life outside of Poland, and will retrace their influence on art in Poland and in the world.

Similarly to the previous – and vastly popular – edition of the lectures, among the protagonists we shall see representatives of various times, styles, and media. This time we will present: Tamara Łempicka, Wojciech Fangor, Marek Żuławski, Jan Lebenstein, Roman Opałka, Zbigniew Rybczyński, Piotr Uklański i Krzysztof Bednarski. We have invited distinguished specialists from all over Poland to host the lectures, people with deep knowledge about their protagonists – art historians, exhibition curators, and authors of monograph publications. Each story will, therefore, gain an additional, personal dimension and will become a unique journey following the footsteps of the creators. The lectures are addressed to a wide audience – they are open and non-academic in format and popularizational in character.

All the lectures will be hosted in the Obserwatorium Zmian in the Gdynia Infobox. The first meeting will take place on Wednesday, October 22, at 5.30 pm.

“Were emigrant artists those who had to migrate or those who wanted to? Perhaps they were those who could leave? The Emigration Museum in Gdynia launches the second edition of the lecture series devoted to Polish emigrant artists. The ambivalence of their statuses, conditions, and motivations is somewhat troublesome, yet it may propose a unique value to the narrative about the complicated and looped fates of Polish artists or artists in general. Some of them were destined to leave, others volunteered. Significantly, the question of Polish presence in contemporary art entails questions about the reach and the importance of Polish artists’ participation in the international circuit of art, as well as questions about the character and the reach of the reception of Polish art. This is particularly valid for emigrant artists, whose lives and works were stretched between Poland and the world; artists curious of the world, yet – at the same time – torn with yearnings; those who assimilated with their new environments or were alienated from them; artists who remained abroad and those who repeatedly returned to their homeland; citizens of the world… The cosmopolitan or irrational formula of artistic life is closely connected to geopolitical or national implications, local experiences, and – lastly – individual fates. Although contemporary art is no longer limited by borders, the artistic life of the 20th century was defined by multiple borders indeed: national ones, environmental, generational, ideological, stylistical… Migrations also tended to give artistic life momentum as mobility and freedom are both part of creative formula.”

Tamara Łęmpicka – a world-famous, Polish painter – is set to be the protagonist of our first meeting. Hubert Bilewicz Ph.D. of the University of Gdańsk will tell us about this unusual woman and famous artist in the context of her presence (or absence) in the history of Polish contemporary art.

Tamara Łempicka (1896-1980) – born as Maria Gurwik-Górska, Polish painter working in France and the United States. Her paintings are presently considered as the quintessence of art déco. The author of impressive paintings in late cubist style, but full of references to traditional painting, especially the aesthetic of Italian quattrocenta. As a portrait-painter of social elites she made a staggering career in the interwar period. A suffragist,mystificateur, and a scandalist, she led a colorful life. After years of exile from the pages of contemporary art history, her creative output has been undergoing a renaissance for more than a decade now, and her posthumous fame makes up for all the years of absence.

“BEYOND THE BORDERS OF ART” SERIES PROGRAM