Beyond the Borders of Art 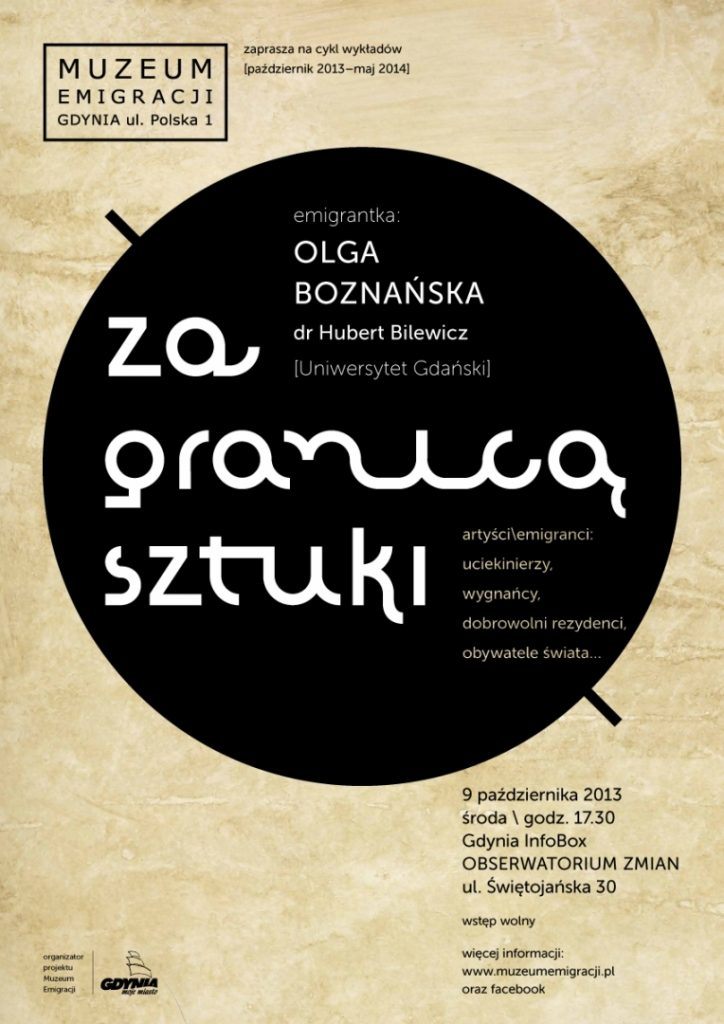 Invites you to a new series of lectures

Over the course of the next eight months, we would like to introduce to the public eight Polish emigrant artists, whose works not only went beyond the limitations of art and opened the world to new ideas, but also touched on important questions about the limitations imposed by philosophy, environment, and the generation gap. The new series of lectures – entitled BEYOND THE BORDERS OF ART – is a splendid opportunity to get acquainted with works of the great, yet often unknown, Polish emigrant artists in various genres, be it painting, film, sculpture, or architecture. We will visit the various destinations of artistic voyages, as well as attempt to understand the unique situation of an emigrant artist. We will, therefore, get to know not only the creators, but also the escapees, outcasts, voluntary residents, and citizens of the world… The first lecture will be held on Wednesday, 9 October, at 5.30 p.m., at the Infobox in Gdynia. It will focus on Olga Boznańska – Polish painter, whose works were displayed alongside paintings of Monet and Renoir.

“Although modern art no longer has any borders, artistic life in the 20th century was defined by many different kinds, such as those of countries, societies, generations, ideas, and style… Topographic borders constituting artistic geography have demarked artistic centers and provinces, and European metropolises have always drawn artists from the countryside. The cosmopolitan or international formula of artistic life was overlapped not only by geopolitical and national entanglements but also by local experiences and individual fortunes. However, other borders had an equal importance in the arts of the last century: borders of professed creative philosophies, of cultivated disciplines, or of the artistic media used. The issue of Polish presence in modern international art brings up questions about the range and importance of Polish artists’ participation in the international art circuit, as well as questions concerning the character and the reach of Polish art. The importance of an artistic presence obviously cannot be merely reduced to a ranking of the popularity of creators assessing their careers according to commercial success or celebrity status. In this cycle of lectures, we attempt to point out selected visual artists and ambiguous phenomena, both international and domestic, that were particularly important for the art of the 20th century, all the while trying to avoid both Polish bias and megalomania. On numerous occasions we will speak not only of Paris – incessantly attracting international artists — but also of artists active in the United States, Canada, Great Britain. Emigrant artists, whose lives and creative output were stretched between Poland and the world, will, however, remain the main protagonists of these meetings: escapees, outcasts, voluntary residents – how they are curious about the world yet tormented by nostalgia; how they assimilated into new environments or were alienated by them; those who remain abroad or returned home; citizens of the world…”

A woman, a painter, an artistic suffragist, an ascetic (1865-1940). Her creative output portrays dilemmas and historic-artistic entanglements of the 19th and 20th centuries. After leaving Cracow, she first worked in Munich, and then Paris, from 1898 until her lonely death. Representing France from the beginning of the century, she exhibited her paintings in the United States alongside Monet and Renoir. With a reputation as one of the best painters in Europe, her portraits were commisioned by Polish, French, and American clientele. Her example influenced many women who wished to devote their lives to painting.

Hubert Bilewicz – art historian, academic professor, educator; teacher at the Institute of Art History at the University of Gdańsk; researcher of the history of the Sopot School and the artistic environment of Gdańsk post 1945; enthusiast of various (artistic and non-artistic) interactions of arts; co-curator of the latest edition of “Alternativa” Visual Arts Festival in Gdańsk.