Beyond the Borders of Art: Krzysztof Wodiczko 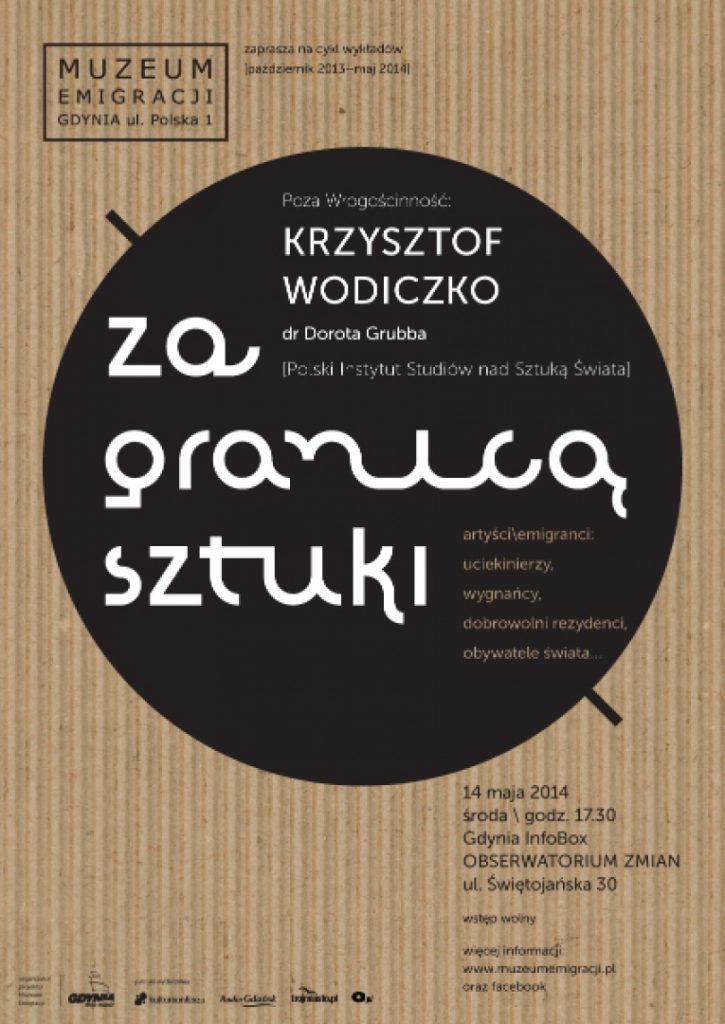 BEYOND THE BORDER OF ART
Emigrant artists: escapees, outcasts, voluntary residents, citizens of the world…?
Krzysztof Wodiczko – Beyond Hostipitality

On May 14, we would like to invite you to the last meeting of the cycle „Beyond the Borders of Art”. The last edition will focus on Krzysztof Wodiczko – one of the most esteemed political artists working in a public space. His spectacular productions inspire reflections about the status of an individual, especially the weak one – sidetracked to the margin of the modern world. He confronted it with monumental architecture, which serves as an illustration of everything that’s constant and – in a way – fossilized in the society. His productions shifted the problems of the “unwanted people” to the very center of his recipients’ interest. This context also includes the question of emigrants – representatives of a different culture, so vulnerable to that particular human change of heart Jacques Derrida called hostility.

Over the course of eight months of the duration of BEYOND THE BORDERS OF ART, we presented several Polish emigrant artists whose works reached far beyond the borders of art, opened the world to new ideas, and signaled important limitations in worldviews, as well as social and generational barriers. We learned about unusual people creating their works from the end of the 19th century until the present day and in various places of the world – belle époque in Paris, the wartime Soviet Union, the postwar America, and the renascent Europe. The list of presented artists includes painters Olga Boznańska, Józef Czapski, Piotr Potorowski, sculptors Alina Szapocznikow, Theodore Roszak, Jarnuszkiewicz Family, as well as architect Maciej Nowicki, and director Walerian Borowczyk. The journey into the world of their imagination and through the great heritage now embraced by the world was accompanied by a strong group of followers – our lectures were met with an extremely warm welcome by the Tricity audience. Each of our meetings was visited by several dozens of listeners. We owe that to our wonderful lecturers – academic teachers and researchers from the Universty of Gdańsk, the Academy of Fine Arts in Gdańsk and the Polish Institute of World Art Studies, among others. It wasn’t only their knowledge they shared with the audience, but also their impressive passion for art.

Born in 1943 in Warsaw, visual artist and art theorist, presently living in the United States. Famous and esteemed for his social initiatives, projections, objects, video films, and multiple essays about art in a public space. Decorated with the Order of Polonia Restituta’s Officer’s Cross in 2011 and with the Medal of Merit to Culture – Gloria Artis in 2009. In 2006 he also received the Katarzyna Kobro Award.

From 1962 to 1968 studied industrial design at the Academy of Fine Arts in Warsaw. After graduation, worked as a designer in various industrial plants, such as UNITRA in Warsaw, among others. His creative output blends art and design as disciplines that interact with each other. His attention is primarily focused on man and his place in the modern world, his alienation, insecurity, and entanglement in the civilization. On multiple occasions, tackled the subject of emigration and exile, as well as the necessity of a pro-active approach to democracy.

Wodiczko authored various projects from the borderland of arts and technology, conceived as solutions to various problems of modernity, such as the Homeless Vehicle which he constructed in 1987 and subsequently tested on the streets of New York City for two years. Referring to the phenomenon of emigration, in 1992 the artist began developing the “Alien Staff” project which was based on the Christian shepherd iconography from the Bible. It was presented in Barcelona, New York City, Paris, and Marseilles, among others. The subject of emigration was also raised by him in his installation “Guests”, presented in the Polish Pavilion in 2009 during the 53. Biennale in Venice. He is the author of “Hiroshima” – an installation presented in 1999 at the Atomic Bomb Dome in Hiroshima. From the early 80s, he was working on slide projections – and later film projections – on urban space buildings. The artist also produced an installation combined with projections for the Zachęta Gallery in Warsaw in 2005. On March 25, 2012 in Nantes, a statue designed by Wodiczko was unveiled on the occasion of the Abolishment of Slavery.

This is how Dorota Grubba Ph.D., who will be conducting the lecture on Krzysztof Wodiczko, would like to recommend it to you:

Krzysztof Wodiczko is one of the most distinguished political artists active in public space, author of worldwide famous projection arts and numerous objects, usually of participatory character. At the same time, Wodiczko is an extremely inspiring pedagogue, theorist, and the founder of a very distinct current in the philosophy of modernity. The strength of his creative output originates in the direct relationship of idea with the exceptional visual aspects of images introduced to public space (they seem to hardly touch it), similar to oversized, huge, figurative medieval frescos (depictions of saints) that often covered the entire height of church interiors. Krzysztof Wodiczko’s productions are primarily themed around the so-called “Others” – strangers, escapees, dominated people, people “without perspectives” – people who find themselves outside of the official political and economic designs, people who often boldly show their faces and speak for themselves. It should suffice to remind the personal stories of women transmitted live onto the oval architecture of El Centro Cultural in Tijuana (2001) by the Mexico-US border. At times, the artist confronts his “Others” with the empowered figures and gestures of law-makers themselves (usually a frame without a face). By the end of the 70s, having concluded an intensive period of artistic and intellectual work in Poland, where he isolated a cycle of ascetic constructions on the potential of participation entitled “Vehicles” (a diagnosing concept and the limits of freedom in public space), Wodiczko left for Canada, and subsequently moved his activities to New York City, while gradually realizing his projects also in other places in the world, among them in Poland. In 1980, already as an emigrant artist in Canada (in Toronto and in Charlottetown, among others), he began experimenting with projections of politicians’ gestures onto monumental modern architecture. In America, he also developed subsequent versions of peculiar vehicles “aimed at the homeless, emigrants, veterans, and the estranged”: Homeless Vehicle 1988-1989, Poliscar 1991, Alien Staff 1992, Porte-Parole 1993, Aegis 1998, Dis-armor 1999, War Veteran Vehicle 2008″ (Bożena Czubak).

The term ‘hostipitality’ mentioned in the title was coined by Jacques Derrida in order to “illustrate the close connection between hospitality and hostility and how one easily transforms into the other with respect to the people we receive” – says Jarosław Lubiak, co-curator of the moving exhibition “Hostipitality” (2010, Art Museum in Łódź), co-created by Krzysztof Wodiczko. The exhibition analyzed “our attitude towards aliens who live with us temporarily or permanently, emigrants, and expatriates”. Mentally and visually fascinating output of Krzysztof Wodiczko often allows well-situated people to reach beyond the aporia of hostipitality. Problems of the “Others”, cleverly situated in the space of the agglomerations of modern cities, although usually ignored and shrouded in a cloud of taboo, help us to learn about their ‘unwanted’ stories, to change our perspective, and to shift our philosophy of life from prioritizing the value of objects to prioritizing the value of our common life on Earth. The complex beauty of these large-format projections covering buildings, statues, and squares with ephemeral images is fundamentally different from the abundance of media and commercial images. They seem to vaguely refer to the Situationists International movement and draw from the activism of American feminist artists who – isolated from official cultural institutions – projected the photographs of their works onto the external walls of the buildings they were denied into. Wodiczko’s projections are hard to ignore and, in a way, they become intense partners of politicians negotiating behind the closed doors of their offices. The artist himself wrote “Sometimes, statues and monuments appear strangely inhuman with their silence and inertness. Likewise, traumatized people – with their muteness and stillness – may seem strangely monumental too. (…) Both statues and ‘survivors’ need to be reanimated and this is the statue therapy.” The artist stressed that people who share their experiences in public space become “speaking statues”. Finally, Wodiczko warns us “Projections must be shut down before the images cease to affect us and become appropriated by the building as its decoration.”