Beyond the Borders of Art: Maciej Nowicki 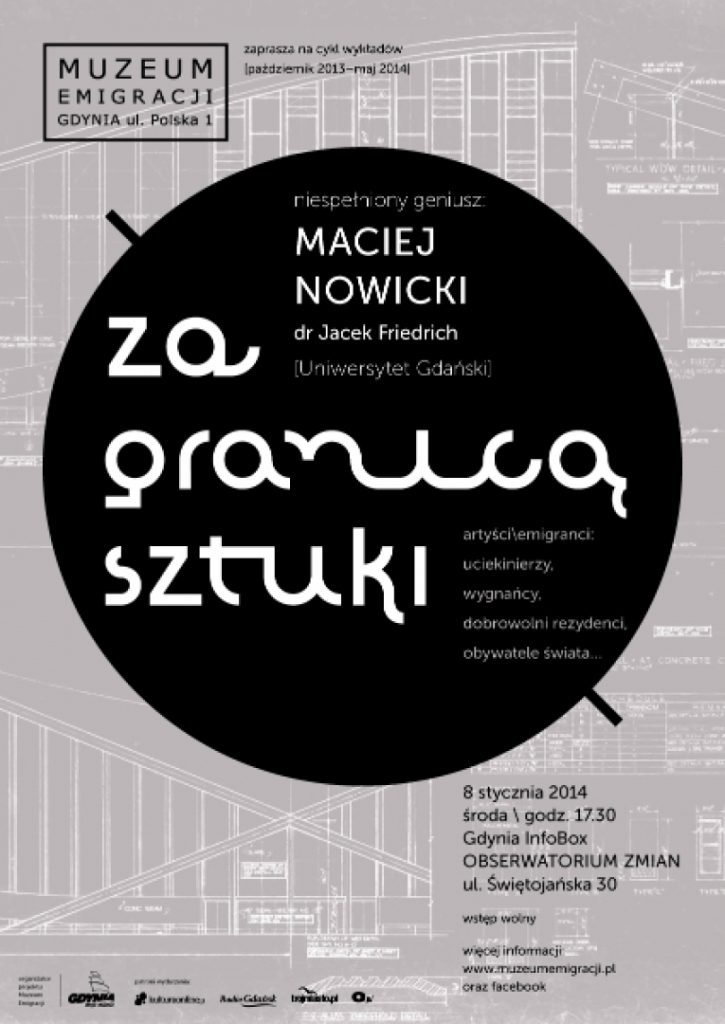 BEYOND THE BORDERS OF ART.
Emigrant artists: escapees, outcasts, voluntary residents, citizens of the world…?

On January 8 we kindly invite you to the newest edition of the “Beyond the Borders of Art” cycle. The meeting will focus on one of the greatest, yet one of the most painfully unfulfilled, hopes of Polish architecture – Maciej Nowicki. It was he who was seen as the person that might bring a renaissance of the language of architecture to the postwar world. His projects were marveled due to his innovation and visionary use of technology. He authored the bold and modern – although not realized – vision of the reconstruction of Warsaw, as well as the famous stadium in Raleigh. His successful streak was prematurely ended by a tragic accident. Dr Jacek Friedrich, lecturer at the University of Gdańsk and Director of Gdynia Municipal Museum, will recount everything Nowicki had left us, as well as everything that was lost forever.

Over the course of eight months, we would like to introduce to the public eight Polish emigrant artists, whose works not only went beyond the limitations of art and opened the world to new ideas, but also touched on important questions about the limitations imposed by philosophy, environment, and the generation gap. The new series of lectures – entitled BEYOND THE BORDERS OF ART – is a splendid opportunity to get acquainted with the works of the great, yet often unknown, Polish emigrant artists in various genres, be it painting, film, sculpture, or architecture. We will visit the various destinations of artistic voyages, as well as attempt to understand the unique situation of an emigrant artist. We will, therefore, get to know not only the creators, but also the escapees, outcasts, voluntary residents, and citizens of the world…

A modernist architect with innovative ideas about architecture and urban design, known and respected in the United States, less so in Poland. He was born in 1910 in Siberian Chita, died in an airplane crash on August 31, 1950 in Egypt.

This graduate of Warsaw University of Technology, already in his early projects – such as parents’ house or holiday resort in Augustów – had shown a glimpse of attention that he had for the rules of modern architecture in the spirit of Le Corbusier, but interpreted them in his own, unique way. During the wartime occupation of Poland, Nowicki was engaged with underground activities of urban design and architecture studios that were developing plans for the reconstruction of Warsaw. After the war, in Vilnius Studio of the Bureau of Reconstruction of the Capital, he created a bold and modern architectural vision, which however wasn’t realized.

In 1945 he was nominated a cultural attaché in Chicago as well as a Polish consultant with the construction of the United Nation’s headquarters in New York (it was constructed between 1947 and 1953). From that moment onwards, he worked outside of Poland – he headed the School of Design of the North Carolina State University and lectured at many other American universities.

The most spectacular building he had ever designed – and one that was forever engraved in the history of world architecture – is Dorton Arena, a multi-purpose arena in Raleigh in North Carolina. After 20 years, the building was featured on the American heritage list, and its author became known as Matthew Nowicki.

Premature death ended Maciej Nowicki’s brilliant career. His designs are considered to be one of the most modern and to be ahead of their time.

Jacek Friedrich – art historian and academic. Director of Gdynia Municipal Museum, lecturer at the Institute of Art History of the University of Gdańsk. Author of books and articles on the subject of art and architecture of Gdańsk, as well as collaborative studies focused among other things on: history of architecture and theory of architecture post 1945, book illustrations in the People’s Republic of Poland, connections between visual culture and ideology.