Beyond the Borders of Art: Theodore Roszak and the Jarnuszkiewicz family 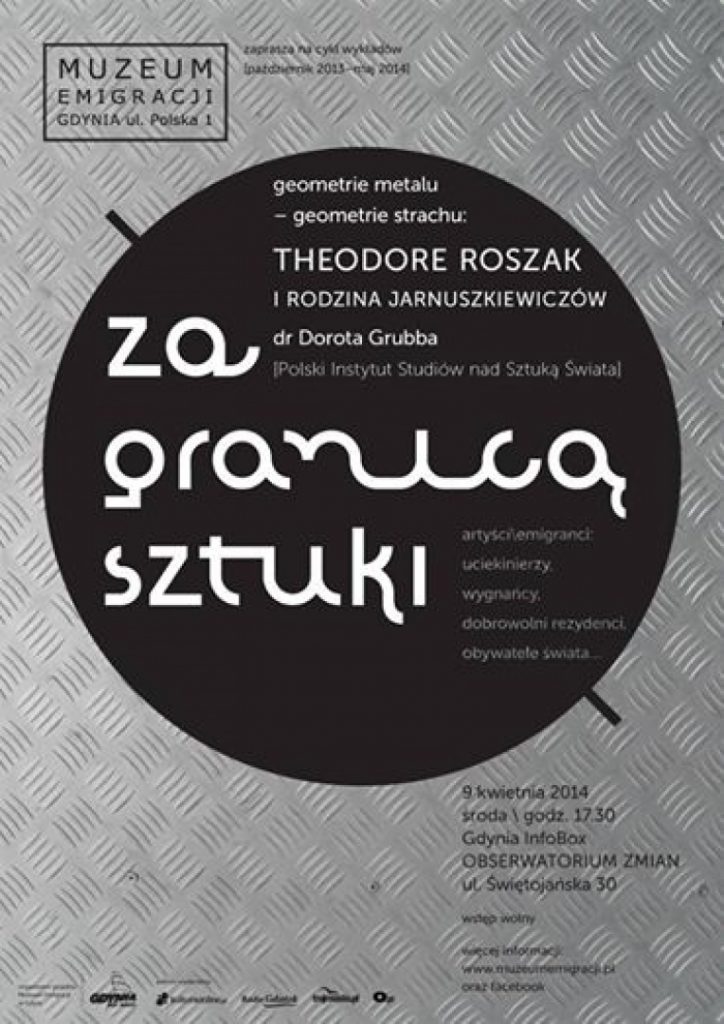 On April 9 we invite all of you to the next edition of the “Beyond the Borders of Art” cycle. This time it will be a meeting with the creative output of several artists whose works intensely express not only the sensitivity of their creators but also the collective experience of the 20th century.The expressive works of both Theodore Roszak from the United States and the Jarnuszkiewicz family from Canada are equally rooted in deep knowledge of art currents – modernism, constructivism, cubism, and surrealism – and in their personal experience of the terror of war.Their universal message found a unique vehicle – metal, whose semantic connotations were changed forever by the hecatomb of World War 2.

The meeting is part of our lecture cycle entitled BEYOND THE BORDERS OF ART – over the course of eight months, we would like to introduce to the publiceight Polish emigrant artists, whose works not only went beyond the limitations of art and opened the world to new ideas, but also touched on important questions about the limitations imposed by philosophy, environment, and the generation gap. The new series of lectures – entitled BEYOND THE BORDERS OF ART – is a splendid opportunity to get acquainted with works of the great, yet often unknown, Polish emigrant artists in various genres, be it painting, film, sculpture, or architecture. We will visit the various destinations of artistic voyages, as well as attempt to understand the unique situation of an emigrant artist. We will, therefore, get to know not only the creators, but also the escapees, outcasts, voluntary residents, and citizens of the world…

Theodore Roszak – born in 1907 in Poznań, died in 1981 in New York City.Emigrated with his family to the United States at the age of 2.Well-known and highly esteemed American artist of Polish descent, recipient of multiple awards, member of the American academies of art, academic lecturer, author of monumental spatial sculptures and architectural forms, some of which can be seen on prominent spots of public buildings, such as the façade of the U.S. Embassy in London.

He received his education at the Art Institute of Chicago and at the National Academy of Design in New York. Between 1929-1930 he was granted a scholarship and traveled to Europe – roaming through the Old World, he worked in Prague, Paris, traveled through Italy, Austria, and Germany.He was fascinated with the work of Giorgio de Chirico. He participated in exhibitions of modern art in Brno, Czechoslovakia, he was also familiar with Bauhaus, cubism, surrealism, and constructivism.Upon his return to the U.S. he created and often exhibited his work while lecturing on several American universities at the same time.His artistic quest focused on sculpture.

During World War 2 he designed airplanes and taught aviation mechanics.Simultaneously, he created and exhibited his sculptures.After the war, shocked with the perspective of a nuclear war, he reached back to his inspirations with nature.In 1950, the Art Institute of Chicago honored him with its prestigious Logan Medal of the Arts – one of the most distinguished artistic awards in the United States.

He also worked on architectural commissions – one of the first ones, and one of his best, was the design of the bell-tower for the innovative chapel designed by Aero Saarinena in the Massachusetts Institute of Technology in Cambridge (1953-1955). In 1960 he sculpted the eagle for the façade of the U.S. Embassy, and another one for the Federal Court building in New York City. His creations can be found in many prestigious galleries all over the world, for example in the Guggenheim Museum in New York City, Museum of Modern Art or Tate Gallery in London.His works were also presented on numerous individual exhibitions and several dozen collective ones.

This is how Dorota Grubba Ph.D., who will be conducting the lecture on Theodore Roszak and the Jarnuszkiewicz family, would like to recommend it to you:

“My lecture is dedicated to Theodore Roszak (1907-1981) and the Jarnuszkiewicz family: artists, Poles, and emigrants, who – thanks to their extraordinary and original artistic achievements and against all external obstacles– form part of the international canon of modern art.The title metal was of great inspiration to Theodore Roszak (born in Poznań, Poland), who spent most of his life creating art in the United States (New York City, among others), and to the Jarnuszkiewicz family (born in Kalisz and in Mysłowice, Poland) working from the 50s in Canada: distinguished architect Zbigniew Jarnuszkiewicz and outstanding sculptors Wojciech, Jacek, as well as working with them in Poland Jerzy and Krystian – the example of which is the meditative interior of a presbytery in a church in Montreal, realized collectively in the mid-60s. The title of the lecture: “Geometry of metal – geometry of fear” signals a particular kind of evolution of the artists, induced by an everyday imperative to create, but also by their personal experiences catalyzed through inner sensitivity, and such terrorsas World War 2 or their vagabond life.The title also refers to the temperature of artistic quests before and after the wars and recurring with those artists desires to create modern, avant-garde art, which in their own view should carry marks of their individual lives, even if only intuitively.

At the end of the 1940s, André Malraux wrote: “In this bloodiest of centuries the increasingly effective riot against pretense (…) is answered by the resurrection of all arts on the Earth… Transformation is not a simple accident, it is the life of a work of art”. Having observed a kind of neuroticism of forms among a narrow group of English sculptors in 1952 that he also related to the intense shadow-figures of Albert Giacometti and Germaine Richier, Herbert Read began to characterize them as an expression of geometry of fear.At the same time, he saw them as a phenomenon parallel to the philosophy of existentialism.

Metal as a vehicle, with its semantic and expressive potential, belonged with great discoveries and passions of the 20th century.During the interwar period, Theodore Roszak created minimalistic and optically kinetic compositions.Fascinated with European modernism, he produced large-format sculptures, geometric totems (among others in primary colors). After World War 2 he created fearful, quasi-birdlike and quasi-plantlike, surreal sculptures that seemed torn with passion and aggressively attacking the space.Sometimes, they invoke dread with their curious kind of stillness and a sense of ambush, like the sculpture “Basket-maker” (1953, collection of Królikarnia of the National Museum in Warsaw).His attitude was also an expression of rebellion against and disappointmentin utilization of high-tech during the war.The uncontrollable energy of his works penetrates the unconscious psyche of recipients and doesn’t let them forget what they saw. They form part of the important collections in museums around the world.

After their (separate) experiments with corroded metal vine, Jerzy, Krystian, Wojciech, and Jacek created many poetic, yet at the same time essentially minimalistic, contemplative spatial forms (i.e. “Icon” by Krystian Jarnuszkiewicz from 1965, “Composition” by Jacek Jarnuszkiewicz from 2000). Creations by these descendants of Mieczysław Jarnuszkiewicz – master of metal fine arts and a meritorious person for pre- and postwar Warsaw – seemed to touch various dimensions of universal and supracultural emotionality referring to such cultural phenomena as Neolithic, geometrized idols from Cyclades or to Taoist output of Constantin Brancusi (who dematerialized solid with gloss of polished metal). Zbigniew Jarnuszkiewicz (1917-2013) too – fascinated with the purity of metal and its meditative aspects – translated those feelings into the language of modern architecture, seemingly modernist, yet at the same time beautiful and warm, rewarding the beings in its presence with an experience of delicacy and freedom.This is also valid for people advanced in years as he worked for them, was a pioneer fully devoted to creators of architecture for people of old age, author of many buildings in Canada, and an esteemed pedagogue, because starting from the 1960s he educated more than 800 students as a Professor of Architectural Composition with the Laval University in Quebec.They called him “Mr. Jarnu – the philosopher of form”.