Beyond the Borders of Art: Wojciech Fangor 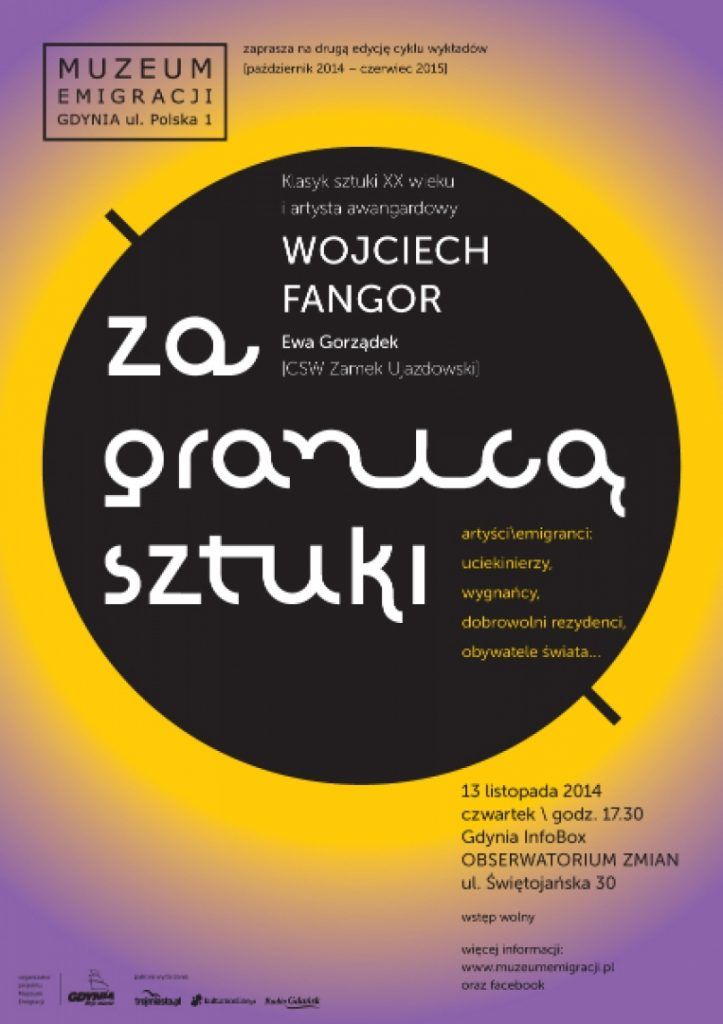 On November 13th, we would like to invite you to the next meeting of the cycle focused on distinguished emigrant artists.

From canonical achievements of socialist realism, through the Polish School of Poster, waves and circles referring to Buddhist mandalas, to paintings inspired by television and colorful magazines – the rich output of Wojciech Fangor – a classic artist of the 20th century and the only Pole selected by the Guggenheim Museum in New York City for an individual exhibition – will be presented by Ewa Gorządek from the Centre for Contemporary Art, Ujazdowski Castle in Warsaw. We invite you to the second instalment of “Beyond the Borders of Art” series, which will take place on Thursday, November 13, at 5:30 pm in the Gdynia Infobox.

This is the second time the Emigration Museum in Gdynia ventures “Beyond the Borders of Art” and extends an invitation to get acquainted with the silhouettes of distinguished, celebrated (but also less recognized) emigrant artists. The cycle of eight lectures will familiarize participants with artistic fortunes of creators that voluntarily chose – or were forced to choose – a life away from Poland and will retrace their influence over the realm of art in Poland and in the world.

Painter, graphic designer, poster artist, sculptor. Author of architectonic and urbanist designs, as well as stage designs. Born on November 15 of 1922 in Warsaw.

During wartime (1940-1944) he studied privately with Tadeusz Pruszkowski and Felicjan Szczęsny Kowarski; graduated from the Warsaw Academy of Fine Arts in 1946. Right after the war, Wojciech Fangor established himself as the author of the most important masterpiece paintings of socialist realism, later co-authored the Polish School of Posters. In the early 50s, he began working with the most distinguished Polish architects who contributed their efforts to the establishment of modernist Poland: Stanisław Zamecznik, Oskar Hansen, Zbigniew Ichnatowicz and Jerzy Sołtan. Together with Stanisław Zamecznik he prepared an exhibition entitled “The Study of Space” – an innovative environment consisting of Fangor’s optical paintings. Only four of them were hung on walls, with the rest presented on easels. Making their way through the paintings, viewers became authors of a piece that defied closed structure and favored open systems instead. “The Study of Space” was a work of innovation that preceded its era – a classic environment with all the features that this kind of artistic activity was to forge in the future. In the 70s, Fangor’s output was dominated by paintings of characteristic circles and waves with blurry, faint edges that induced optical effects similar to those characteristic of Op Art. Those were the works that helped the artist conquer New York City, where in 1970 he was featured within an individual exhibition in the Guggenhein Museum, as the only Pole to date. 37 works were selected – precursory to the Western searches in the field of Op Art. In the mid-70s, the artist returned to figurative painting (studies of interior space, “picture-in-picture” works), but also painted a series of paintings based on television broadcast in which he resorted to visual effects typical for that medium. Beginning with the mid-80s, Fangor composes his paintings incorporating into them fragments of scenes, persons, and objects that are often quotations from other famous paintings or copies from illustrated magazines. He also returned to working with portraits, sceneries, and still life.

When analyzing the very diverse output of the artist, one can hardly refuse to notice that Fangor never abandoned thinking of space – seeing it either as an area of physical experiences or as a metaphor. The study of space may be considered the most important motif of his work.

The lecture on Wojciech Fangor’s heritage will be conducted by Ewa Gorządek of the Centre for Contemporary Art, Ujazdowski Castle in Warsaw.

Ewa Gorządek – Head Program Curator in the Centre for Contemporary Art, Ujazdowski Castle in Warsaw. Studied art history in the University of Warsaw, graduating with a Master’s Degree in 1984. Beginning with 1985, she’s been working with the Centre for Contemporary Art, Ujazdowski Castle. Curator of many individual and group exhibitions of Polish and foreign artists. Art critic (“Obieg”, “Magazyn Sztuki”, “Exit”), author of multiple essays for catalogues, biographic entries in the Encyclopedia of Polish Painters (“Słownik Malarzy Polskich” – Wydawnictwo Arkady) as well as short biographic entries on Culture.pl website (Adam Mickiewicz Institute).