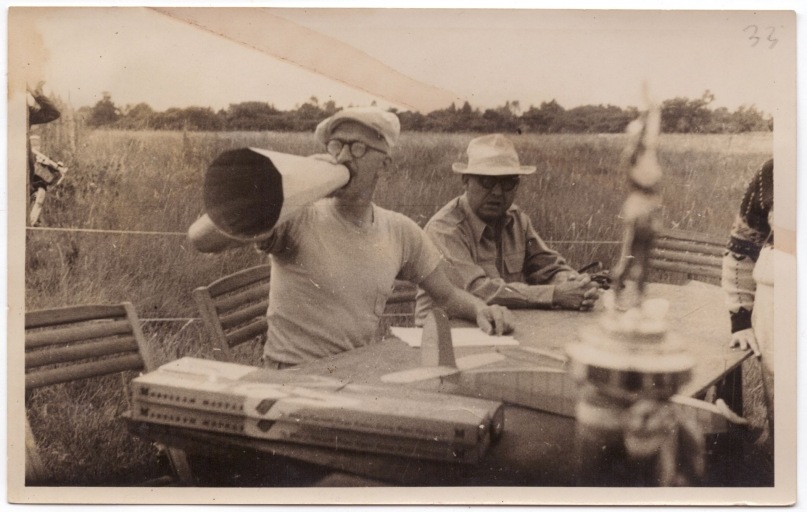 We are inviting you to take part in a literature workshop which will be held this Tuesday, on 25th October at 6:00 PM. (Registration: warszaty@muzeumemigracji.pl) It will be devoted to Andrzej Bobkowski’s diaries. On Wednesday, 26th October there will be a lecture about the writer. Both events will be conducted by an expert in Bobkowski’s writing, Maciej Nowak PhD, to whom we talked about the subject author of the Tour de Bobkowski cycle.

Emigration Museum in Gdynia: Do you agree that Andrzej Bobkowski’s writing is going through a renaissance as far as the interest of Polish readers is concerned?

Maciej Nowak PhD: Yes, I think you can say so. As I said when we were celebrating the 100th anniversary of his birth: Bobkowski is growing! You can notice interesting things when you look at the reception of his texts. The author, who actually debuted after 1945 was soon noticed by outstanding readers: Jerzy Giedroyć, Mieczysław Grydzewski, Jarosław Iwaszkiewicz, etc. He also had a relatively large circle of fans among regular readers, as for the Polish situation after World War II. I am talking about the situation before 1957, when Sketches in Ink were published. Unfortunately, the political or social conditions of their reception were not very favourable. Though Witold Gombrowicz who was a really picky reader was delighted by them, they did not sell well. I may be wrong, but it seems their copies could still be found at the warehouse of the Literary Institute in the 80s of the previous century. Bobkowski dies in 1961 and is soon forgotten. The volume of his prose called Coco do Oro, which was published in 1970 thanks to Barbara Bobkowska’s persistence and Jerzy Giedroyć’s kindness was barely noticed. Another wave of interest in Bobkowski started after Romana Zimanda’s paper War and Peace in the 1983 People’s Republic of Poland. However, it was limited to a narrow group of experts. Still, it changed gradually. It needs to be said that thanks to a reprint of the Sketches by the London Kontra and subsequent underground copies, the circle of Bobkowski’s fans began to expand. After the transformation of 1989, Sketches were published. Collections of his correspondence and various texts, films as well as radio and TV programmes appeared. Sorry for not being more modest, but so did my monograph On an Arch. On Andrzej Bobkowski’s writing (Warsaw 2014). One of its reviewers said it was both a summary of the entire reception of Bobkowski’s writing and opening of its next stage. Obviously, all of this is accompanied by the most significant thing – the interest of regular readers.

Bobkowski was a man of many talents and passions. But what writer was he? What in his writing would you consider the most characteristic?

The most characteristic thing about his writing is the fact that only its one piece may be referred to as ‘artistic’ literature in the classic sense. I am thinking of several stories and the drama Black Sand. Though Bobkowski considered this part of his work especially meaningful, readers value him most for his diaries and letters. Kaziemierz Wierzyński pointed it out in one of his letters. Coming back to your question, I would say that two features of his writing are most important to me. The first is writing with his entire self. Michał Chmielowiec called this phenomenon “life-literature”. The second one is the attitude in which he combines affirming the physical world with the faith in the power of language, which can face up to perception of beauty and – ultimately – God.

It is hard to separate Bobkowski’s writing from his biography and especially emigration. Did leaving the country define Bobkowski as a writer?

Well… I am not sure we could say it “defined” him. Bobkowski started his first diary as a teenager. Later, there were next notebooks, which he filled with a more sophisticated handwriting and style as well as pictures. When he went to Warsaw to study and Barbara, who was his fiancé at that time, stayed in Cracow, they exchanged around 900 letters. He debuted with a humorous sketch in Tempo Dnia magazine near the end of his studies. It certainly did not make him a writer. Actually, he had a problem with people calling him that until the end of his life. However, what I call “a run-up to writing” in my book was exceptionally important for the development of his writer’s awareness. After leaving for France in March 1939 Bobkowski started exchanging copious amounts of letters with the members of his family who stayed in Poland. Apart from many anecdotes and stories from his and Barbara’s life at that time, we can also see an extensive sketch for a novel, which he was planning to write. Unfortunately, he did not succeed. And after the World War II broke out, he started writing diaries, which after many years were transformed into Sketches in Ink. I believe that keeping a diary in 1939-1944 made him realize that he had mastered the art of writing literature. It can be seen in the letters he wrote to his family at that time and the inscription for his mother after Sketches were published… It shows that he experienced an intellectual and spiritual awaking in France, after the outbreak of the war. The entire education which he had received at home, which was sort of dormant, now turned out to be something significant and full of life. It started “working” in him. So on the one hand, Bobkowski emigrated together with the experience he had accumulated after his press début. On the other hand, he needed a shock coming from the outside for his genuine talent to wake up, so that he could enter the writer’s path. In a way, the historical context acted as a catalyst here.

The diaries played a major part in the Polish literature of the 20th century, especially as far as writers who wrote abroad are concerned. What is the position of Sketches in Ink, when we compare them to the work by Gombrowicz or Herling-Grudziński?

We would need a long lecture to answer this question thoroughly, but there is no room for that. Generally, it can be said that Bobkowski’s diary which he kept during the war was not meant for publication. It was written for him, Basia, his family and friends. So it had a reader’s potential, but it was limited to a small circle of people. Both Gombrowicz and Herling-Grudziński, on the other hand, though about printing their texts when writing them. Their texts are not genuine diaries in this sense. However, they apply some principles characteristic of diary writing though they were not supposed to be sensu stricto diaries. Sketches in Ink, on the other hand are a book which was prepared based on that war diary from 1939-1944 and it bears all the consequences of that fact. If Herling-Grudziński is similar to Gomrbrowicz, Bobkowski could be compared to Tyrmand and his Diary 1954. I can refer those who are interested in these issues to my book, On an Arch.

What could surprise today’s reader in Sketches in Ink.

Probably the easy manner in which he combines activities which usually are remote from one another: deep historiosophical reflection, trilling cycling, remarkable religiousness and deeply sensual vision of the world, a nearly anarchistic individualism as well as a touching sympathy for the fate of his nation. And the vision of everyday life which gains a fascinating depth in a very simple way.