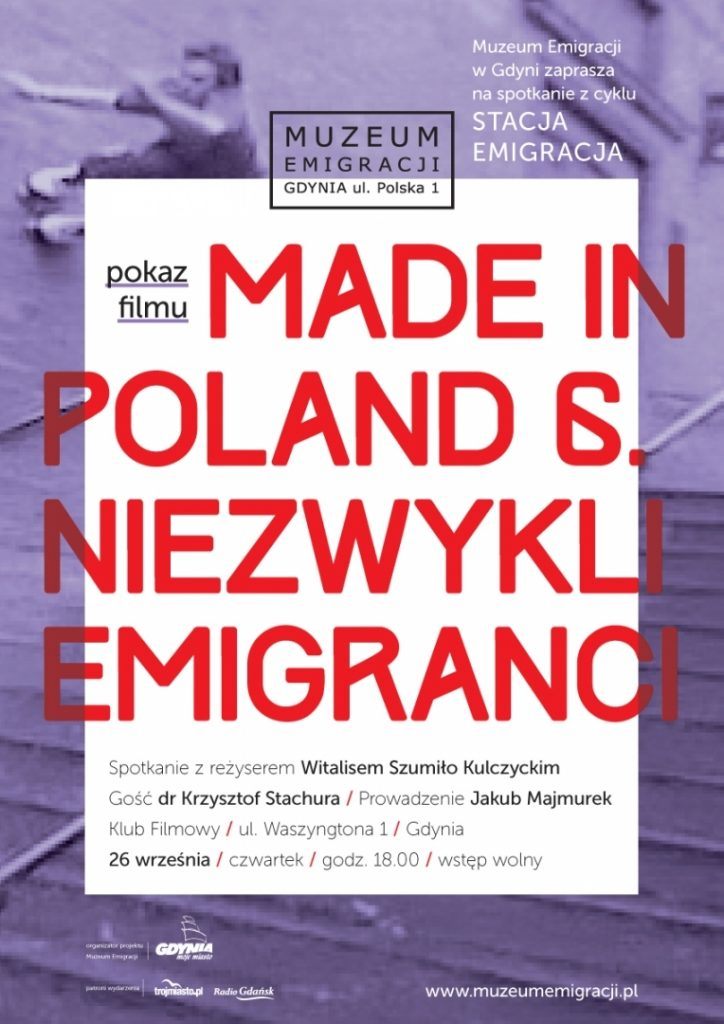 Witalis Szumiło Kulczycki – the guest of the September edition of Emigration Station.

Screening of the film “Made in Poland 6: Unusual emigrants”

emigration as an extreme sport

On September 26, at 6 pm, at Gdynia Film Club, the Emigration Museum kindly invites you to a screening of the documentary film “Made in Poland 6: Unusual emigrants” and to participate in a meeting and discussion with its director on the subject of the labor emigration of young Poles as seen through a camera lens. The event constitutes a great opportunity to see this 2011 film; though it is presented now for the first time in the Tricity, it has already been recognized by being awarded, among others, the main prize at the Festival of Documentary Forms NURT in Kielce in 2012.Dynamically edited scenes of acrobatic stunts conducted by protagonists who share a passion for rollerblades give us a fresh look at the phenomenon of modern emigration and the methods young people adopt in order to overcome difficult situations in life.

Witalis Szumiło Kulczycki studied on the Edinburgh Napier University in Scotland and won many awards. He set up Ownstyle Films dedicated to the realization of bold documentary projects, music videos, and other creative visual forms. He is passionate about extreme sports and unorthodox production techniques, both of which are reflected in his dynamic creations.

Winner at the 18th Festival of Documentary Forms NURT 2012. The production was rewarded for its fresh look at the subject of modern Polish emigration, as incorporated into a dynamic film form as a metaphor of living on the edge.The seven protagonists are young people; emigrating to the United Kingdom in search of work during the economic boom of 2006-2008, they arrive to different places in Scotland, Ireland, and Great Britain.They share a common passion for professional rollerblading (freestyle rolling), which allows them to forget about the emigrational difficulties: language barriers and the search for employment and a place to live.The film portrays several rollers from various Polish cities, as well as soma from Cork, Ireland, in Edinburgh, Scotland, and Czech Prague.In one interview, the director characterizes the protagonists: “For these people, it is their favorite sport, a moment to take a break, but also a reminiscence of a time before their emigration – usually spent with their friends on rollerblades.It is a return to the time, when they didn’t have to face such problems as looking for a job without knowing the language or exhaustion after work on a construction site”. The documentary is notable for an expressive and dynamic form similar to that of a music video, as well as its absorbing look at young emigrants’ lives.