Concert by Dorota Miśkiewicz and her band 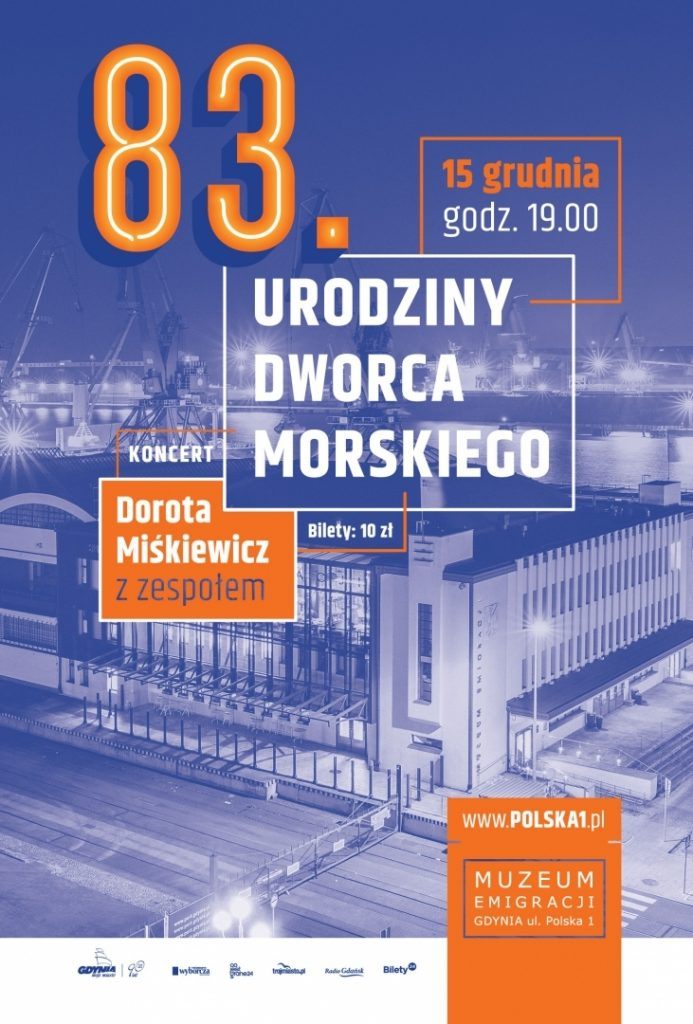 Maritime Station’s birthday: concert by Dorota Miśkiewicz and her band

One of the most interesting Polish female jazz vocalists. She made music with Cesaria Evora, Nigel Kennedy, Tomasz Stańsko, etc. Wojciech Młynarski, Grzegorz Turnau and Michał Rusinek wrote songs for her. On 15th December, at 7:00 PM Dorota Miśkiewicz and her band will play a concert to celebrate the Maritime Station’s 83rd birthday.

The opening ceremony of the Maritime Station was held on 8th December 1933 in the Gdynia port. It was an important spot on the passenger traffic map in Poland. This is where the legendary Polish ocean liners led by M/S Batory would be moored. Thousands of people had left the country through this place before the war broke out. In 2016, it is 83 years since the opening of the Maritime Station, which underwent a major renovation in 2015 and regained its pre-war glamour. The gem of modernist architecture became the location of Emigration Museum in May.

Dorota Miśkiewicz will sing together with her band, including Tomasz Kałwak (keyboard instruments), Patryk Stachura (bass guitar) and Sebastian Frankiewicz drums) will play a concert at the Emigration Museum to celebrate the Maritime Station’s birthday. The vocalist will sing songs from her original albums. Their lyrics were written by Wojciech Młynarski, Michał Rusinek, Grzegorz Turnau, Bogdan Loebel, etc. She will also present several pieces from the canon of the most beautiful songs of the previous century, with music by Henryk Wars, Jerzy Wasowski and Krzysztof Komeda.

Dorota Miśkieiwcz is one of the most interesting personalities of the Polish jazz scene. A composer, violinist and lyricist known to the broad public primarily as a vocalist. She has cooperated with Cesaria Evora, Stefano Bollani, Nigel Kennedy, David Murray, Louis Winsberg, Kepa Junkera, Tomasz Stańko and a whole galaxy of Polish musicians. She has released six studio albums.

She is also the originator of the unprecedented PIANO.PL project during which over ten pianists from three different generations performed together with her and Atom String Quartet on one stage in chamber duets. Some of the pianists were Włodzimierz Nahorny, Andrzej Jagodziński, Leszek Możdżer, Marcin Wasilewski, Krzysztof Herdzin, Dominik Wania, Piotr Orzechowski “Pianohooligan”, Grzegorz Turnau, Lutosławski Piano Duo (Bartłomiej Wąsik and Emilia Sitarz). The unique concert took place on 16th May 2016 and the album with the live recording premièred on 28th October.

She completed a violin class at the Fryderyk Chopin University of Music in Warsaw. The daughter of a famous jazz saxophonist, Henryk Miśkiewicz. She began her career in Włodzimierz Nahorny’s band, with which she has recorded a series of albums devoted to Polish composers: Karol Szymanowski, Fryderyk Chopin and Mieczysław Karłowicz. The singer’s skills and versatility resulted in invitations to cooperate with many eminent personalities, like the Capo Verde diva, Cesaria Evora or Stefano Bollani and Nigel Kennedy as well as Jan Ptaszyn Wróblewski, Wojciech Młynarski, Tomasz Stańko, Grzegorz Turnau with whom she has recorded songs and played concerts together regularly since 2005 and many more. She is the author of many of the songs which she preforms. She also records solo albums regularly: Dorota Goes to Heaven – Zatrzymaj się in 2002 (nominated for the Fryderyk award in the jazz category), Pod rzęsami in 2005, Caminho in 2008 (Golden Record in the pop category and two Fryderyk Award nominations), ALE in 2012, Lutosławski, Tuwim. Piosenki nie tylko dla dzieci recorded together with the Kwadrofonik band in 2013 (Golden Record and Fryderyk Award nomination in the classical music category). In 2016, the Best of compilation as well as PIANO.PL which is a recording of a unique concert, to which she invited more than ten best Polish pianists, like Leszek Możdżer, Marcin Wasilewski and Andrzej Jagodziński. It is the first live album in her discography as well as her first DVD production. The artist is nostalgic, old-fashioned, yet in constant search and always sensitive to new sounds or experiments. The lyrical compositions are her distinctive feature and they balance between musical genres which are difficult to classify. Elegant and modest, but very charismatic on stage, she makes contact with audience instantly and her voice is as beautiful as she is.

The tickets to the concert can be bought for 10 zł at the Emigration Museum’s ticket office or at www.bilety24.pl.