Contest of narratives on emigrants 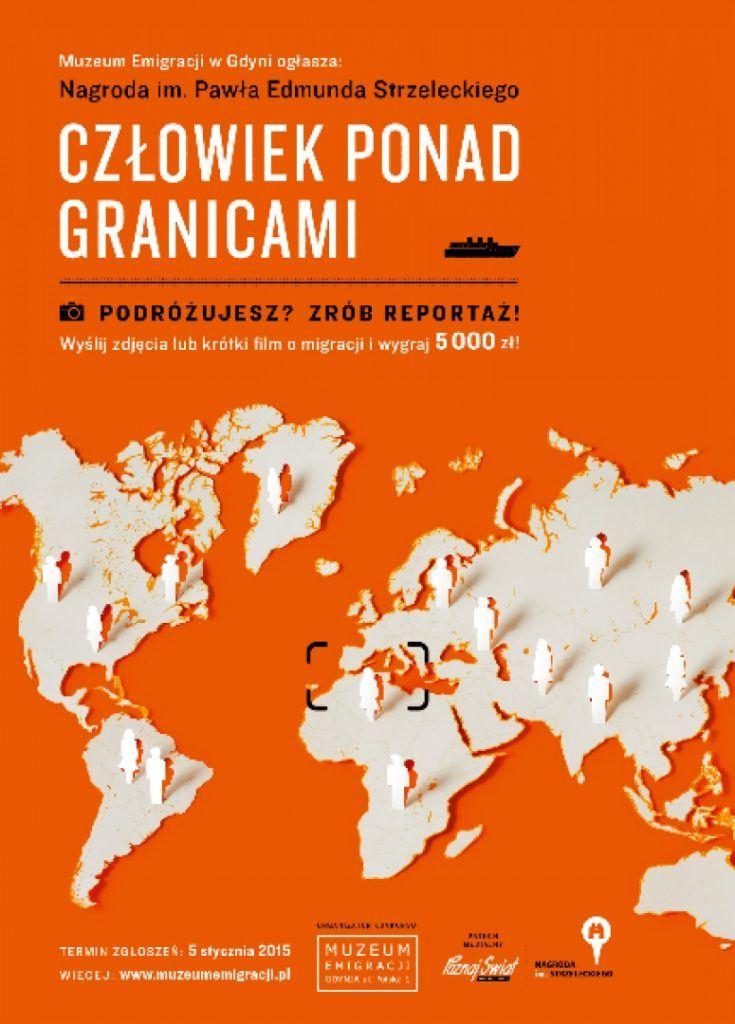 We are waiting for your narratives to be handed in by January 5, 2015!

You travel? Shoot films or snap photographs? Take part in the Emigration Museum in Gdynia’s contest for the best report about emigrants. As the main prize, we offer 5 000 PLN together with a chance to present your work at the biggest traveling event in the country – the National Meetings of Travelers, Sailors, and Mountaineers at “KOLOSY”. The contest – entitled ” A person beyond borders” – is directed at Poles at home and abroad who have met, sometime during their travels, an emigrant whose story is worth presenting in front of a wider audience. The Museum will await your applications until January 5, 2015.

What is it that the emigration experiences of people all over the world have in common? How do Poles in the UK, New York or the Republic of South Africa make their dreams come true? How do Europeans manage in Australia or Africans in the Americas? Through this competition, the Museum would like to recount the stories of people who confront the unknown, find their place among new languages, new cultures, new climates, and – sometimes – completely new economic realities. Reports about their hardships, successes, and emotions, featuring individual protagonists or wider contexts, will be assessed by the well-known traveler and reporter Monika Witkowska, multiple-prize-winning photographer and laureate of World Press Photo 2011 Filip Ćwik, and the Director of the Emigration Museum in Gdynia – Karolina Grabowicz-Matyjas.

The first edition of the competition, patroned by Pawel Edmund Strzelecki – an outstanding geographer and traveler, and the first Pole to complete an individual scientific journey around the world – took place a year ago under the “Get to know your fellow countryman!” tagline and focused on reports about Polish emigrants. Last year’s jury awarded the main prize to a film report recounting the story of a Pole who – while living in a small town in Guatemala – took it upon himself to impersonate Santa Claus. Two other works were distinguished – one telling the story of Poles living in London, and the other featuring descendants of Polish emigrants in Texas, USA. Click [HERE] to see all the films.

Similarly to last year’s competition, the main criteria for choosing the winner revolve around uniqueness and the weight of the story tackled; technical prowess is of secondary importance. We extend our invitation to both amateurs and professionals – no professional equipment is needed – anyone who sends in their application accompanied with photographs or a short film by January 5th, 2015 can join the competition.

The subject of the competition has been expanded this year and it aims to present Polish experiences with emigration in a broader, supranational context – The mission of the Emigration Museum in Gdynia is to broaden popular awareness of the history of Polish emigration and we conduct this activity with a full recognition of the universal character of the phenomenon. Migration is a natural process that has occurred virtually everywhere and since the dawn of time. We are extremely curious about the stories of Polish emigrants that will be presented within the competition as we are all part of the world in a constant migrational traffic – explains Karolina Grabowicz-Matyjas, Director of the Emigration Museum in Gdynia.

The Application Form and the Terms and Conditions are available here: [READ[2] ]

“report” reminded me of “reporting immigrants to the authorities.”Narrative” is nice or maybe “account”, which I don’t like so much.You can check these: http://www.thesaurus.com/browse/report