Immigrants have landed in Gdynia port 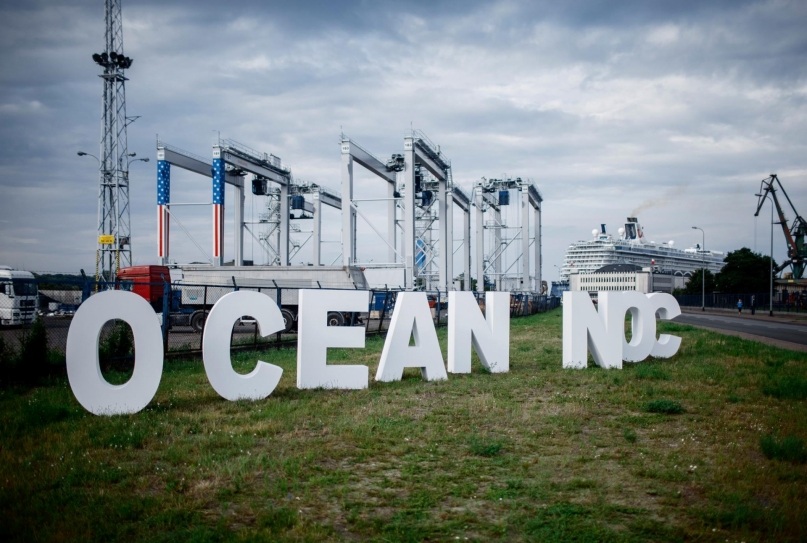 Where should we talk about migration, if not in Gdynia? The top Polish visual artists – led by Wilhelm Sasnal – and numerous spectators took part in the opening of an exhibition in the space of Gdynia port, which was devoted to immigrants. The second edition of Migrations | Creations organised by the Emigration Museum has started.

Migrations | Creations is an artistic enterprise, which deals with the problem of migration, the hottest topic of the last months. The most famous artists form Poland and abroad have accepted the invitation to participate in the Emigration Museum’s project. You can have a look at pieces by Wilhelm Sasnal, Paweł Althamer, Honorata Martin, Yael Bartana and ‎Łukasz Surowiec in the port area. The Tricity audience can also enjoy Guests, the installation by Krzysztof Wodiczko, which was awarded at the Venice Biennale. The participants of the Open’er festival will be the first ones to see it but it will also be available to everyone at the Emigration Museum in Gdynia from 5th July.

Over one hundred spectators took part in the exhibition opening, which was held at the Karlskrona roundabout in Polska Street. Wilhelm Sasnal, the artist whose pieces can be seen in the prestigious galleries of Paris and New York, talks about his work.- To me, this piece is, above all, a tale of the endless experience of emigration – said Sasnal – I was happy to accept the invitation to Gdynia, as the founding myth of the city has always been close to my heart.

The audience had a chance to admire the rest of the pieces during a walk with the curator, Aleksandra Grzonkowska, and the artists who were present at the opening. Honorata Martin talked about Drawn, her work which consisted of 30 drawings scattered around the port. – The story of Polish refugees during World War II who found a sanctuary in Iran was my first inspiration. However, the pieces refer to various experiences of migration. One of the images depicts me, at the time when I worked in Great Britain.

Kiock (kiosk in Ukrainian) by Łukasz Surowiec stirred a lot of interest among the participants of the walk. Together with two Ukrainian female students, he created a kiosk with herbal cigarettes. The figure of a cigarette smuggler seemed interesting to me. In the past, Poles used to love this job. Today Ukrainians do it. When asked for a comment, the co-authors of the installation emphasized the unique status of tobacco in our culture. Taxes put on it are used to finance military actions. The cigarettes were made of herbs collected by the artist’s grandmother. They will be available at the kiosk until the end of the week. The income from their sales will support Ukrainian students.

Right next to the kiosk, in front of the pre-war Tobacco Warehouse, the participants of the opening were given a foretaste of the architectural walks, one of the main attractions of the second edition of Migrations | Creations. Anna Orchowska-Smolińska, an architect as well as their organiser and guide said a few words about the history and construction sophistication of the warehouse building. It is just one of the 18 places you will get to know during the tours of the Gdynia port. Some of them still exist but some have been lost to the past. The first walk will take place on 2nd July.

Declaration, by an Israeli artist Yael Bartana and Retrospective by Paweł Althamer were the last part of the Gdynia exhibition. Bożena Czubak, its curator, talked about Krzysztof Wodiczko’s work, Guests. In 2009, when the piece was being prepared, it referred to many problems connected with the perception of immigrants.However, it seems to me t However, it seems to me that today it has an additional, especially strong overtone. The lack of contact between the audience and the immigrants behind the foggy glass is not a coincidence. We are not supposed to identify with them or connect with them emotionally, only reflect on their situation. Currently, the installation is presented at the Open’er festival. It will available at the Emigration Museum from 5th July.

Migrations | Creations 2 will last until the 17th July. The programme involves meetings, discussions and screening of films on migrations as well as Chechen cuisine tasting prepared by immigrants from the Caucasus. The full programme of the project is available at the Museum’s website: www.POLSKA1.pl