Kashubians of Jones Island, Milwaukee: then and now 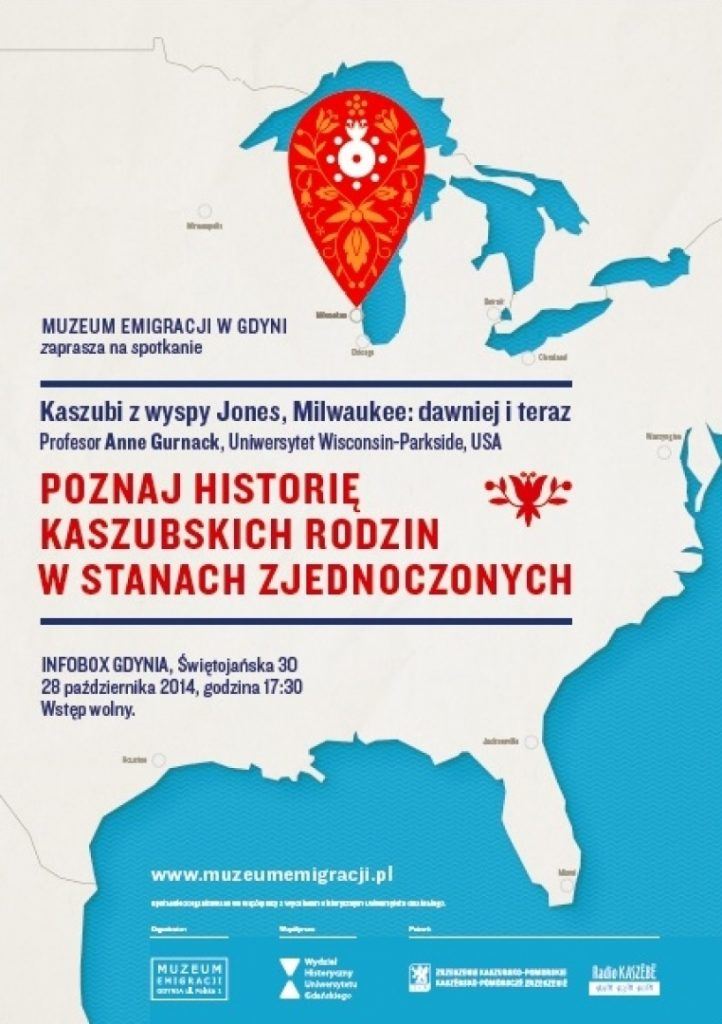 A lecture by Professor Anne Gurnack of University of Wisconsin-Parkside, USA.

We would like to cordially invite you to:
Kashubians of Jones Island, Milwaukee: then and now
with Professor Anne Gurnack, University of Wisconsin-Parkside, USA

A meeting with the history of emigration

Throughout the centuries, Poles have been abandoning the country of their origin and traveling to distant destinations in search for a better tomorrow – for better perspectives for themselves and their families, for personal freedom, and for political freedom. The decision to emigrate has always entailed the necessity for a change of lifestyle, as well as the need to find one’s place in new surroundings that are often completely different from Polish reality.These are stories full of powerful emotions, of tears, but also of great courage in reaching one’s goals. The amount of Poles living away from Poland shows that against all odds they manage to build a new home abroad – often cultivating Polish traditions, culture, and staying in touch with their homeland.

In its activities, the Emigration Museum in Gdynia devotes a lot of attention not only to researching the phenomenon of emigration itself, but also to recounting the fates of Poles living abroad through the personal stories of individual persons, as well as the whole communities gathered around various Polish institutions and organizations abroad. The mission of the museum is to erect a bridge between Polish emigrants and Poles at home, and to combine the history of Poland with the history of Polonia, to tell a more complete tale of the fates of Poles. To help us with this task, we invite distinguished specialists from Poland and abroad who present various interesting, sometimes dramatic, heroic, and complicated adventures of our compatriots all over the world.

We invite you to a meeting with Professor Anne Gurnack of University of Wisconsin-Parkside, USA, who will present the unusual story of Kashubians formerly inhabiting the Jones Island on Lake Michigan in the state of Wisconsin.

The question of emigration from Kashubia to North America has been sparking keen interest and lively discussions both in our homeland, as well as in agglomerations of Polonia, even more so since this subject hasn’t been explored as much as – for example – the question of Kashubian emigration to Canada. The country of the maple leaf has been researched by Jan Drzeżdżon, Ph.D. and Kashubians – together with their descendants living there – were also described, among others, in publications by Professor Jan Borzyszkowski, Izabela Jost, Kazimierz Ickiewicz, or reverend Władysław Szulist, who also described their settlements in the United States. This fact gives us all the more reason to appreciate the activities of researchers from across the ocean, such as Professor Anne Gurnack, who contributes her efforts to the preservation of their memory and raising awareness. Presented in the wider context of the emigration from Kashubia, her lecture will help us learn about a unique place, Jones Island, and the people who inhabited it.

Kashubians were some of the first Polish settlers to arrive in Milwaukee, and the area around Lake Michigan became their new homeland. Jones Island allowed them to find the American equivalent of Kashubian nature and offered them the opportunity to continue their fisherman lifestyle. They managed to build a strong Polish community which thrived there until its forced displacement due to the expansion of the nearby port, by the Illinois Steel Company. Although Kashubians haven’t lived on the island since 1940, they are strongly attached to it and continue to meet on a yearly basis in the Kashubian Park, created especially for them, in order to celebrate the memory of “their island” and of their Kashubian origins.

Retired professor of the University of Wisconsin-Parkside. Professor Gurnack headed the Department of Political Science, Law, and Philosophy. She also held the position of Head of Interdisciplinary Studies there. Her research is focused on Polish communities of New York and Milwaukee.

The lecture will be held in English with simultaneous translation into Polish.

This meeting is brought to you in co-operation with the Department of History of University of Gdańsk.