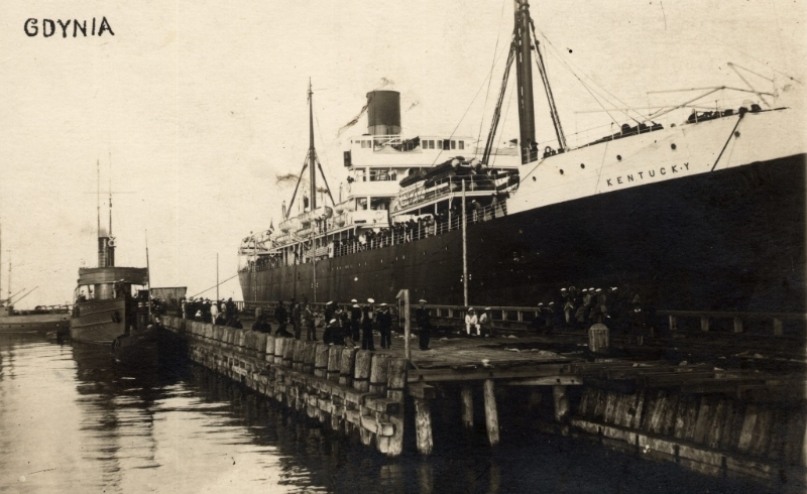 91st anniversary of a breakthrough event in the emigration history of Gdynia.

On August 13, 1923 the first ocean liner visited Gdynia – the French steamer „Kentucky”. Onboard this ship, Polish emigrants began their long journey to the United States.Beginning with that day, Gdynia became part of one of the most important social, economic, and political phenomena in the history of Poland and in the lives of Poles.

If we take a look at pictures from those unusual times, we wouldn’t recognize the port nor Gdynia itself, which gained municipal rights only three years later.The French steamer arrived as the first ocean liner to the Temporary War Port and Fishermen’s Shelter, which was opened only several months before.It took around 1500 citizens of Greater Poland whose final destination was the United States of America.

For the next couple of years, Gdynia’s maritime passenger traffic systematically grew.By the end of the 1920s, it amounted to around 24 thousand people annually.In order to meet this challenge, the city needed an efficient and modern infrastructure – it was of great importance to the whole country of Poland.Thus, the idea of the construction of the Marine Station in Gdynia was born.

This beautiful idea turned into a finished project in the December of 1932.It was time to proceed with the construction which was trusted to two companies from Gdynia.They took to work with large enthusiasm – the Marine Station was completed in only 12 months!The opening ceremony – which took place in the December of 1933 – was graced by the Minister of Foreign Affairs, Józef Beck, among others.

Ever since that time, the magnificent modernist building was the pride and the landmark of the city.It was here where famous Polish ocean liners moored.The passenger hall and its adjacent Transit Warehouse enabled the efficient service of the passenger traffic, whose routes included both Americas, among others.Few people remember however, that it not only served the passengers, but the citizens of Gdynia too.It was a popular meeting place of various local associations and organizations.It was also the home of the port parish “Stella Maris” and the stage of many cultural and sports events.

World War 2 dealt with the Marine Station just as cruelly as with the city itself.The German occupational authorities destroyed all the elements that referred to the Polish nation and turned into the offices of the Kriegsmarine.The most painful blow was handed by an Allied air raid in December of 1943 – the North-Western part of the edifice was severely damaged.It hasn’t been properly restored over the years, including the postwar period when it regained its original role and when m/s Batory sailed into the oceans again.That year, the front façade did, however, regain its original shape, the Polish eagles returned to it too.

Presently, a new era is opening in the history of the Marine Station.The building will be the home of the Emigration Museum in Gdynia, which is currently being developed.Under the symptomatic address of Gdynia, Polska Street 1, a modern institution is being born, which will combine exhibition functionalities with artistic, popularization, and educational ones. The Emigration Museum in Gdynia gives the hope that after a long period of time the Marine Station will regain its importance and the memory of the millions of Poles that traveled through it will be maintained.This place will not only resonate with the sounds of their footsteps, but it will also enable the people scattered all over the world to meet again and – perhaps – inspire them to take another, different journey, this time an intellectual one – in search of their identity.