Mexican fiesta for the start of the summer 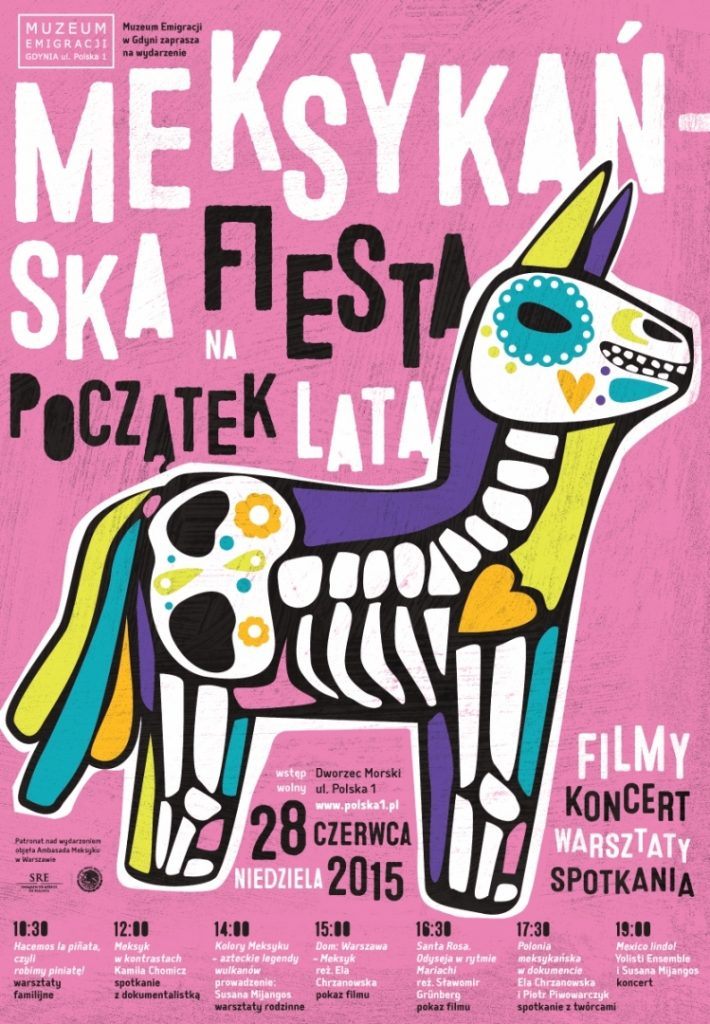 An invitation from the Emigration Museum to the

Mexican fiesta for the start of the summer

A hot summer is about to begin on Polska Street! The Emigration Museum in Gdynia would like to welcome its first summer season in the Mexican spirit. Things are going to be cheerful, colourful, creative and musical. We will take a look at Polish Mexico then and now, talk about contemporary Mexican culture, view several documentaries and listen to a concert of traditional Mexican songs performed by an expressive Mexican artist. There will be no shortage of things for children to do: we will create colourful piñatas and listen to legends about mysterious Mexican volcanoes. The time has come for a “Mexican fiesta for the start of the summer”!

The invited guests will include the Polish-based Mexican soprano Susana Mijangos with a band, Kamila Chomicz, a documentary film-maker and traveller, fascinated by Maya culture, and Ela Chrzanowska and Piotr Piwowarczyk, makers of a documentary on the history of Polish Mexico and Polish-Mexican relations.

The “Mexican fiesta for the start of the summer” is not only a chance for the entire family to have fun but also to learn about important chapters in Polish emigration to Mexico. This is long-standing and abounds in remarkable episodes such as the fate of several hundred Polish orphans who arrived in Mexico during the war on invitation from the Mexican president, a story which will be told through one of the documents during the event.The Museum would like to invite its guests to have a look at the life of the Polish diaspora in contemporary Mexico and also the life of Mexicans in present-day Poland.

In this unique celebration of cultures we will be joined by the museum’s restaurant, Mondo di Vinegre, which is going to prepare Mexican dishes specially for the occasion. To truly relax in a holiday atmosphere, feel free to visit our sunny patio which overlooks the port.

IMPORTANT! Participation in all events is free of charge, with free guest passes for film screenings to be collected on Sunday at the Museum’s Information Point. Participation in family workshops by prior e-mail or phone booking (warsztaty@muzeumemigracji.pl, phone no. 58 670 41 56 ) – by Friday, July 26!

The Mexican Embassy in Poland is honorary patron of the event.

Piñata is a Latin American tradition of breaking a colourful paper container filled with sweets and surprises. In Mexico the piñata is organised prior to Christmas but is also a fun birthday activity for Mexican children. During the creative workshops, aimed at children aged 6-10, everyone will be able to make their own colourful piñata and then take it home.

Prior booking required (by July 26): warsztaty@muzeumemigracji.pl, phone no. 58 670 41 56. Please include full name and age of the child as well as guardian’s telephone number.

Kamila Chomicz is a traveller, photographer and maker of independent short-feature films. In her work she presents the world of the modern Maya, who occupy the Yucatán Peninsula in Middle Central America, partly located in Mexico. Their world is full of contrasts, with magic rituals blending with modern life. Despite their Catholicism, the Mayas carry with them the deeply rooted beliefs of their ancestors. Mayan beliefs are undergoing constant change, however, by taking on new motifs and the colours of modern times.

During the session at the Emigration Museum, Kamila Chomicz will talk about Mayan culture and present a few short videos depicting traditional celebrations in Mayan villages, along with photos and other material to document her journey across Mexico. Participants will also have a chance to see the film Dona Emilia, a portrait of an 84-year old shaman and midwife who administers fertility treatment to women from all over the world.

What do the mysterious names Popocatéptl or Iztaccíhuatl have in common with Romeo and Juliet? How did Lake Texcoco in Mexico come about? We would like to invite children and parents to discover the colours of Mexico together and to listen to a story about the ancient Aztec gods. Thanks to our unlimited imagination, we will take part in a magical journey to the world of the oldest legends of the Land of the Sun. The workshops will be run by a Polish-based native of Mexico, Susana Mijangos, who will acquaint children with the culture of her country.

Home: Warsaw – Mexico is a documentary journey across two cities, Warsaw and Mexico. The film guides, Poles in Mexico City and Mexicans in Warsaw, show the local colour of the places where they live in exile and the process of adaptation to a different culture. Coming from diverse generations and backgrounds, with various professional and personal experiences, the people reveal their longings and fears and define their own notion of home. The stories are brought together by a mini-lecture by Dr Andrzej Kruszewicz, an ornithologist and Director of Warsaw Zoo. This debut film by Ela Chrzanowska shows human fate in a poetic way while at the same time telling a story of the author’s personal journey to the previously unknown world, thanks to which she tries to discover her own path.

Free guest passes for the film screening are required, to be collected at the Museum’s Information Point on the day.

On the basis of the Sikorski–Mayski Agreement signed in 1941, many Poles arrested by the NKVD were able to leave the labour camps and make for Iran where they found shelter. The civilian refugees were later moved to Polish settlements established in India, Africa, Mexico and New Zealand. On an invitation from the Mexican president, a group of 1,434 Poles, including several hundred orphans, arrived in 1943 in a hacienda Santa Rosa, near Leon in Mexico. This place was their home for several years. Today, the now 70- and 80-year-olds talk in the film about the time spent in Santa Rosa and the wonderful people they met there. It was here, having experienced a great deal of hardship, where they finally found peace and renewed faith in humanity. The film contains extensive archive material.

Free guest passes for the film screening are required, to be collected at the Museum’s Information Point on the day.

Polish Mexico in a documentary

A discussion with the director of Home: Warsaw – Mexico and the producer of the documentary Santa Rosa. Odyssey in a Mariachi rhythm about the Polish Mexicans then and now, about what we have in common and how we differ, and about the results of the blend of Polish and Mexican history.

Ela Chrzanowska (born 1980), a documentary film-maker and producer, has been living between Poland and Mexico for 5 years. Graduate of the Lodz Film School and the Melchior Wańkowicz School of Journalism in Warsaw. Human rights activist, for many years a member of Amnesty International and co-founder of the Women’s Initiative Association.

Piotr Piwowarczyk (born 1967), producer and documentary film scriptwriter, resident in Mexico for 6 years. Graduate of the Faculty of Journalism at Warsaw University and Mercer College in New Jersey, USA, founder of the “Mam Marzenie” ( I Have a Dream) Foundation.

Concert in a salsa rhythm

The Yolistli Ensemble is a musical group which fuses Mexican and Spanish sensitivity, and the temperament of these two cultures.

The leader of the group is the exuberant Mexican soprano Susana Mijangos – a graduate of the Conservatory of Music in Mexico City and the University of Music in Warsaw under Professor Ewa Iżykowska. Between 2006-2007 she was part of the vocal quartet Singers of United Lands, in which she sang classical, folk and pop music on a tour of the USA. The group’s members were natives of four different countries – Japan, Israel, Uganda and Mexico.

In 2007 she was invited to take part in Britten’s War Requiem at the Festivalensemble in Stuttgart, Germany. In 2010 she moved to Poland permanently. She has represented Mexican culture all over the country, including the Baltic Philharmonic and the National Philharmonic in Warsaw.

At the Emigration Museum in Gdynia she will be appearing alongside the Mexican baritone Panrone Ortega and guitarist Timoteo Paradis, originally from Valencia. Together they are going to present traditional Mexican melodies which will conquer and warm the heart of any audience.

The Mexican Embassy in Poland is honorary patron of the event.

Admission to all events is free