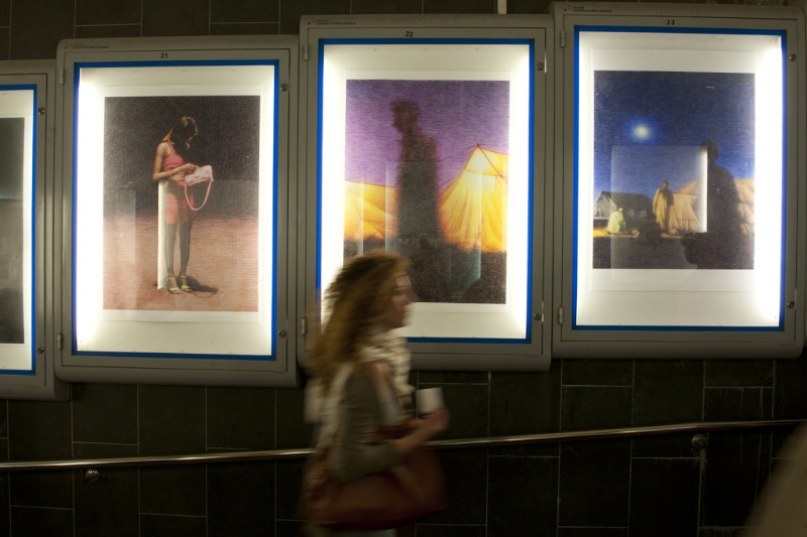 The artists’ objective was described by Mrs. Karolina Grabowicz-Matyjas, Director of the Emigration Museum in Gdynia, who organized the event.

– We posed a question about the modern understanding of such words as emigrant, immigrant, migration. At the same time, we wanted to place the process of migration in context of translocation represented by the dynamic space of suburban railway. Justyna Wicenty, author of the exhibition, stresses the diversity of forms adopted for artistic expression – nearly each of the invited artists explored different means. Therefore we have murals, billboards, installations, video presentations, a gazette, and even a smartphone application. It is important to emphasize that extensive use was made of existing infrastructure and a new meaning was given to trivial requisites of city life – cabinets, billboards, free gazettes handed to citizens.

The meeting was launched right next to Iwona Zając’s work. Her mural “I’m a foreigner. Can you give me an advice?” is anything but complete – instead it invites passers-by to a dialogue. “I am genuinely interested what advice might this foreigner receive”, the artist said, “The word <<foreigner>> is considered to be old-fashioned, but to me it is still alive and meaningful.”

After fifteen minutes devoted to a conversation with the artists, refreshments, and the participants’ write-up of their advice onto a billboard, the exhibition’s curator proceeded to another work – the installation entitled “Transatlantic” by Julita Wójcik, where the guests could also listen to the author’s thoughts on her work. Julita Wójcik emphasized the exceptionality of the port of Gdynia in the context of emigration, recounted her inspirations with Gombrowicz and stressed the similarities between difficult financial situations of both the artist and an emigrant.

The next stage of the mobile vernissage featured “Displaced” – a cycle of works by Sławomir Elsner, and a mural by Sławomir Czajkowski – still being created on the building visible from the platform of the Gdynia Główna SKM Station. From there, the participants were taken by the SKM train to the next stop of the planned route.

In Gdynia Redłowo station, “Gary” – one of the works by Radek Szlaga – was placed on a billboard. On the platform, we could find a cabinet illustrating Ludomir Franczak’s “Recovered” project featuring Germans from Słupsk, who had to file loyalty declarations accompanied by their resumes after World War II. These micro-biographies were recovered, as the author explained, but the meaning this word carries is much wider and covers the rarely pronounced ghosts of the German past, as well as “retrieved lands” – a term used by the Polish communist authorities. These stories are in no way political – they rather resemble resumes we send today when looking for jobs. A gazette by the same title is also part of the installation. It was distributed among the inauguration’s guests and would be available to passengers on the railway stations of Tricity during the MIGRATIONS | CREATIONS exhibition.

During the trip to the Gdańsk Oliwa station, part of the guests got familiar with the “Arszyn | Emigrant GPS” installation prepared by Krzysztof Topolski. Taking a form of a smartphone application and making use of such elements like radio play, interview and soundscape, it gives an account of the experiences of Polish emigrants in the United Kingdom.

Upon arrival, spectators saw the second part of Radek Szlaga’s installation, “Asbestos”, as well as “From a suitcase” – a work by Anna Witkowska presented in a cabinet located on the platform. She told the guests about her inspirations with Duchamp and her attempts at ironic summary of her artistic work to date. During the following stage of the trip, the participants saw billboards by Galeria Rusz located in Gdańsk Stocznia station.

The trip through the exhibition was concluded on Gdańsk Główny station, where installations by Iwona Zając (“I am common”) and Anna Witkowska (“Journal”) were located. The guests listened to Anna Zając’s anecdotes about emigrant life and her meeting with Prince Charles. Accompanied by the curator’s trustworthy megaphone, the mobile inauguration reached its finale after two hours of touring.

Alongside artists and organizers, the participants included media representatives, invited guests and citizens of Tricity. The MIGRATIONS | CREATIONS exhibitions will be available to all until July 14.