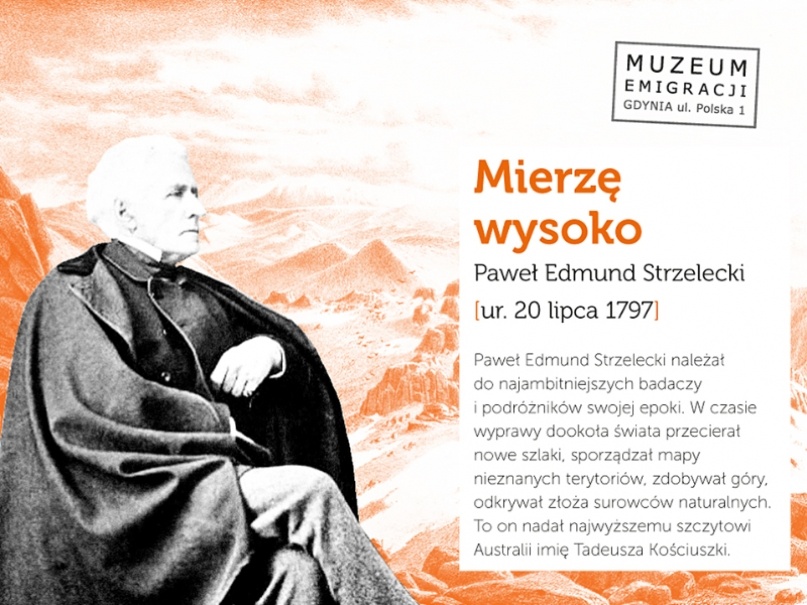 Paweł Edmund Strzelecki, born on July 20 of 1797 in Głuszyn, was one of the biggest Polish discoverers, as well as a geographer and a pioneer of geological studies.

He dreamed of travels ever since he was a child, but it was only after he received a large heritage after prince Franiszek Sapieha – whose estate he administered – that he could carry out his dream. He was in love with Adyna – a high born lady, whom he attempted to abduct, when her father didn’t approve of their wedding. His plan wasn’t successful and he had to leave the country – even more so, since he was also threatened by repressions after the November Uprising.

In 1834, armed with a master’s degree in geology obtained at Oxford University, he set off for a nine-year journey around the world. He conducted environmental studies in North America – from Florida to Mexico and Canada, where he succeeded in discovering large deposits of copper. He also encountered deposits of natural resources during his explorations in Argentina, Peru, and Ecuador.He familiarized himself with South American volcanoes and initiated meteorological studies on the continent – in Brazil and Uruguay, among other countries. He spent a year working in Hawaii and on the Polynesian Islands.

His most important discoveries were made in Australia – he described new lands and mountain ranges, identified deposits of coal, oil, and gold. He meticulously studied the highest mountain range of the continent – the Great Dividing Range. He named its highest summit Mount Kosciuszko.

Upon his return to Europe, he settled in London. He wrote the first scientific book about Australia: “Physical Description of New South Wales”. After publishing the results of his studies, he gained universal respect throughout the world and received nobility from the hands of the Queen of England. He held a membership of The Royal Society of London. Strzelecki passed away in 1873. In 1997, his ashes returned to Poland and were put to rest in the Church of St. Adalbert in Poznań.

Paweł Edmund Strzelecki – a world class discoverer who never forgot his Polish roots and tirelessly promoted Polish culture in the world, was chosen the patron of the Emigration Museum’s Award for Travelers. We encourage you to familiarize yourself with the rules of the award, as well as with the idea that lies behind it.