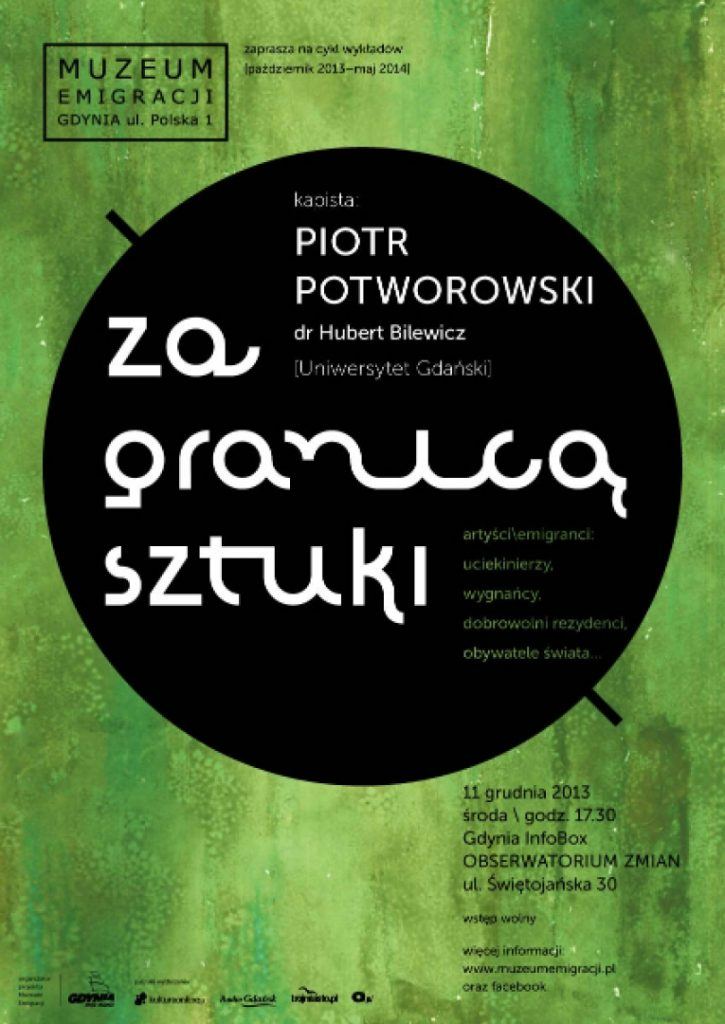 On December 11 we invite you to the next meeting of the „Beyond the borders of art” cycle.

BEYOND THE BORDERS OF ART.
Emigrant artists: escapees, outcasts, voluntary residents, citizens of the world…?

On December 11 we will present this year’s last meeting of the “Beyond the Borders of Art” cycle. This time around, it will focus on an already legendary figure – a painter, who presented his works at some of the most prestigious exhibitions in Paris, London, Venice; an artist, who – several years after his death – continues to expand his fan base and has established himself as an example for young artists. We invite you to a meeting with a Kapist – Piotr Potworowski. We expect all the enthusiasts of painting to arrive – this event is aimed not only at connoisseurs, but also at all those sensitive to beauty and thirsty for art of the highest quality. After the attendence of more than 200 people at the first two lectures, we know that there is no shortage of them in Gdynia. We hope that even during the Christmas season they will find a moment to acquaint themselves with the output of this exceptional Polish emigrant artist.

Over the course of the next eight months, we would like to introduce to the public to eight Polish emigrant artists, whose works not only went beyond the limitations of art and opened the world to new ideas, but also touched on important questions about the limitations imposed by philosophy, environment, and the generation gap. The new series of lectures – entitled BEYOND THE BORDERS OF ART – is a splendid opportunity to get acquainted with works of the great, yet often unknown, Polish emigrant artists in various genres, be it painting, film, sculpture, or architecture. We will visit the various destinations of artistic voyages, as well as attempt to understand the unique situation of an emigrant artist. We will, therefore, get to know not only the creators, but also the escapees, outcasts, voluntary residents, and citizens of the world…

Born on June 14, 1898 in Warsaw, died on April 24, 1962 in Warsaw. Painter, graphic artist, and a stage designer. One of the most original artists of postwar Poland, always in search of his unique style and an artist open to the world. His art, which had been largely created during his emigration, continues to inspire today.

While studying at the Cracow Academy of Fine Arts, he met Józef Pankiewicz and was lucky enough to join the group of Kapists who set their eyes on traveling to Paris and continuing their artistic education at the source of French painting. Potworowski took passionate advantage, absorbed new experiences, and searched for his own path of artistic expression. He departed from other members of the Paris Committee fairly quickly and enrolled into Léger’s studio. Initially, he was inspired by post-impressionism, which established the Kapist style. Later however, he independently focused on studying painting over centuries – starting with his admiration of old painting and output of such artists as Rembrandt, through the analysis and meticulous reproduction of paintings by Delacroix or Corot, to the art of Cezanne, Bonnard, Matisse, Picasso or Braque. He exhibited his art during the 38. Salon des Indépendants in 1927.

After the outbreak of World War 2, he made his way with his family to Sweden and subsequently travelled to Great Britain, where he remained until 1958. There, he joined the circle of Polish emigrant artists, at the same time becoming a member of the London Royal Group and the Royal West of England Academy. In 1958, he took the decision of returning to Poland and developed ties to art academies in Gdańsk and Poznań. His international experiences, as well as path of artistic development unburdened by socialist influences, became an inspiration to many pedagogues and students alike.

Despite the passage of time, his output continues to exercise influence over next generations of artists. The incessant search for his own form of artistic expression, as well as his following of the latest trends in world art or the influence of Kapist art all define the strength of his art. He is known mostly for his landscapes, but was also a skilled graphic artist, and excelled in the field of set design working together with Jerzy Grotowski, among others.
Potworowski’s paintings had been exhibited on many prestigious domestic and international expositions, such as: Documenta II in Kassel (1959), XXX Biennale in Venice (1960) where he won an award, Musée d’Art Moderne in Paris (1961), Museum of Modern Art in New York (1961). The artist’s works have found their way to both private and public collections: Tate Gallery St Ives, Bristol City Art Gallery, Royal West of England Academy, as well as many museums such as National Museums in Warsaw, Poznań, and Cracow.