Poles in the Maple Leaf Country 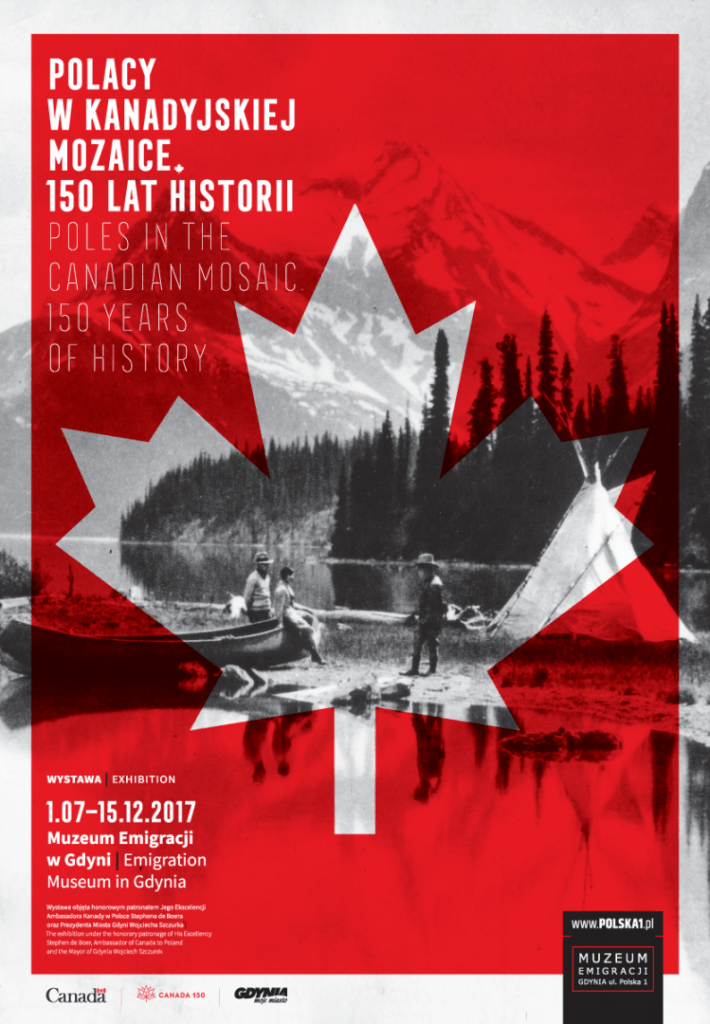 They built roads, bridges, the first railway lines and houses on the prairies. During World War II came as refugees, and in the days of Solidarity as political immigrants. Poles in Canada. In the 150th anniversary of its foundation, the Emigration Museum in Gdynia invites for the exhibition “Poles in the Canadian mosaic. 150 years of history”. Vernissage on July, 1.

On July 1, 1867, three British colonies in North America were united into Dominion of Canada by virtue of the unification act. This event is considered the beginning of the Canadian statehood. In the 150th anniversary of the foundation of Canada, the Emigration Museum in Gdynia, in cooperation with the Embassy of Canada in Warsaw, prepared an exhibition showing the presence of Poles in the history and the present of Canada. The exposition can be visited from 1 July to 15 December 2017 in the hall of the Transit Warehouse and in the hall of temporary exhibitions at the Museum. The vernissage is to be held on Saturday, July 1, at 12.00. The selected content of the exhibition, from 29 June, will be presented on the premises of the Embassy of Canada in Warsaw. The exposition will be available also for Canadians in Ontario (among others in Hamilton Central Library, London Central Library or Roncesvalles Polish Festival in Toronto).

2 million lakes, forests covering nearly half of the country area, the most famous waterfall in the world and harsh winters. Canadian nature has become the inspiration for the exhibition visuals. The exposition walls have been built of light wood, and their sides are covered with the picture of the characteristic red maple leaf. In the display cases there are original objects associated with Poles in Canada, for example a coin with the image of Janusz Żurakowski, the first man in Canada to break the sound barrier on CF-100 Cannuck aircraft. In the hall of temporary exhibitions, visitors will have an opportunity to see a spatial map presenting the population and distribution of the Polish ethnic group in each province of the Maple Leaf Country. These data so far has not been presented anywhere else in such a way, it was developed specially for the purposes of the exhibition.

The story about Poles in the territory of today’s Canada begins after the collapse of the November Uprising, when an emigrant engineer Kazimierz Gzowski supervised the construction of the railway bridge over the Niagara River. The visitors will find out, among other things, how it is possible that in the province of Ontario still the Kashubian language can be heard, what neighbourly relations between Poles emigrating from Galicia and Ukrainians looked like, what Polish houses on the prairies were built of, or where the famous Blue Army soldiers were trained.

The waves of immigrants flew to Canada throughout the 19th and 20th centuries, therefore, in many ways, the history of Canada is the history of immigration. The Charter of Rights and Freedoms guarantees legal and political protection to the Canadian multiculturalism. Poles, as the members of the Canadian ethnic mosaic, for many years have been successfully developing their talents in many fields of science, culture and art. In the hall of temporary exhibitions of the Emigration Museum it will be possible to get to know the profiles of many more or less famous Polish Canadians, for example, the pianist Jan Lisiecki or singer Basia Bułat. People of Polish origin are also present in the social and political life of Canada, from the Federal Parliament to city councils. Canada’s first Minister of State for multiculturalism was a Pole, Stanley Haidasz.

The history of 150 years of Polish presence in Canada will be told in the Maritime Station, the current seat of the Emigration Museum in Gdynia, the place from which in the 1930s transatlantic ships under the Polish flag started leaving for Canadian ports. At the symbolic address: Gdynia, ul. Polska 1, the museum tells the stories of people and connects Poles living in Poland and abroad, famous characters, and millions of anonymous expatriates, the past with the present.

POLES IN THE CANADIAN MOSAIC. 150 YEARS OF HISTORY

Exhibition at the Emigration Museum in Gdynia

The exhibition under the honorary patronage of His Excellency Stephen de Boer, Ambassador of Canada to Poland and the Mayor of Gdynia Wojciech Szczurek.