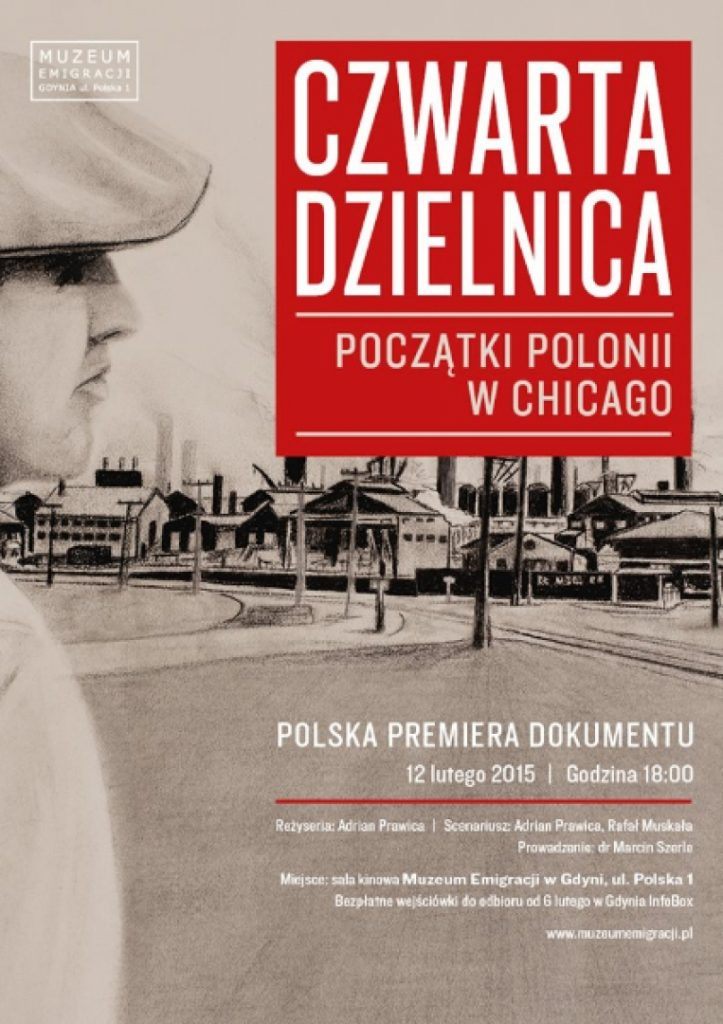 On February 12 12, at 6 pn and 8 pn, we invite you to the Marine Station in Gdynia for the Polish premiere of the documentary film „Czwarta dzielnica”. We have asked its authors – Mr. Adrian Prawica and Mr. Rafał Muskała – to say a few words about it.

“Czwarta dzielnica” recounts the beginnings of American Polonia. What does this title mean?

Rafał Muskała: “Czwarta dzielnica” is a film about millions of people who came to Chicago at the turn on 20th century. They came here, because Poland was gone from maps of the world. It was here – in the United States of America – they built their homeland. “Czwarta dzielnica” refers to Chicago, which – at the time – had such a huge Polish community that, besides the three annexed territories, it seemed like the fourth part of the nonexistent country.

How come you had chosen this subject? Does it stem from your personal need to find the source of Polish presence in the U.S.?

Adrian Prawica: Yes. The whole project was very personal for us right from the start and we both had a lot of faith in it. We wanted to show the history of Poles in America and in Chicago differently from how they are spoken about today. Many of us know someone who had been to America or lives there. In my opinion, it is important to know this story – it connects the Poles in Chicago to the Poles at home even today.

Did your work on the documentary influence the way you see America and American Polonia?

AP: Naturally. As authors, we needed to immerse ourselves completely in this subject for a couple of years and – for the most part – we discovered stories we had no prior knowledge of. After visiting many towns and historical sites, personally, I was under an enormous impression. I feel immense pride that the American Chicago is, in a way, also our, Polish city. Poles built it together with other ethnic groups and our footprints are visible here even today.

RM: “Czwarta dzielnica” made me understand what longing for one’s homeland really is. While boarding a ship, millions ofpeople knew it was a one-way ticket and that they would probably never see their home again. It is similar today. Some of them have no chance to return and many are homesick. It’s very thought-provoking.

According to you, what is it that Poles here at home should know about American Polonia? What is it they can learn from “Czwarta dzielnica” ?

RM: Most importantly, Poles at home should know that Polonia exists, has always existed, and will always exist. Strong roots and preservation of tradition are stronger than the so-called Americanization – “Czwarta dzielnica” speaks about that too. The film emphasizes the Polishness and how much we are able to do in order to preserve it.

The film will be premiered at the Emigration Museum in Gdynia and will be shown by Polish TV only afterwards. What was Polonia’s reception of it?

AP: It was wonderful. As creators, we weren’t able to predict audience’s reception before the screening. The idea was just an idea, the budget – just a budget, but all in all, everything was just a huge gamble and a mystery until the day of the screening. It is the first such project to be produced by people from Chicago and we had no idea whether people would like our film or leave the theatre halfway through it. I am very happy they all stayed and our screenings in the U.S. gave me the opportunity to meet hundreds of people who wanted to share their memories – sometimes for a long as three hours straight after the projection.

RM: Very emotional. Tears and emotion proved that many identified themselves with the millions of people who emigrated “after bread”. Each emigrant is a separate story. That invoked memories among the audience. Some of them recalled their grandparents’ stories about the hardships of their journey. Some of them were unaware of how much our ancestors had to endure. They all felt overfilled with Polish identity and pride of being a Pole.