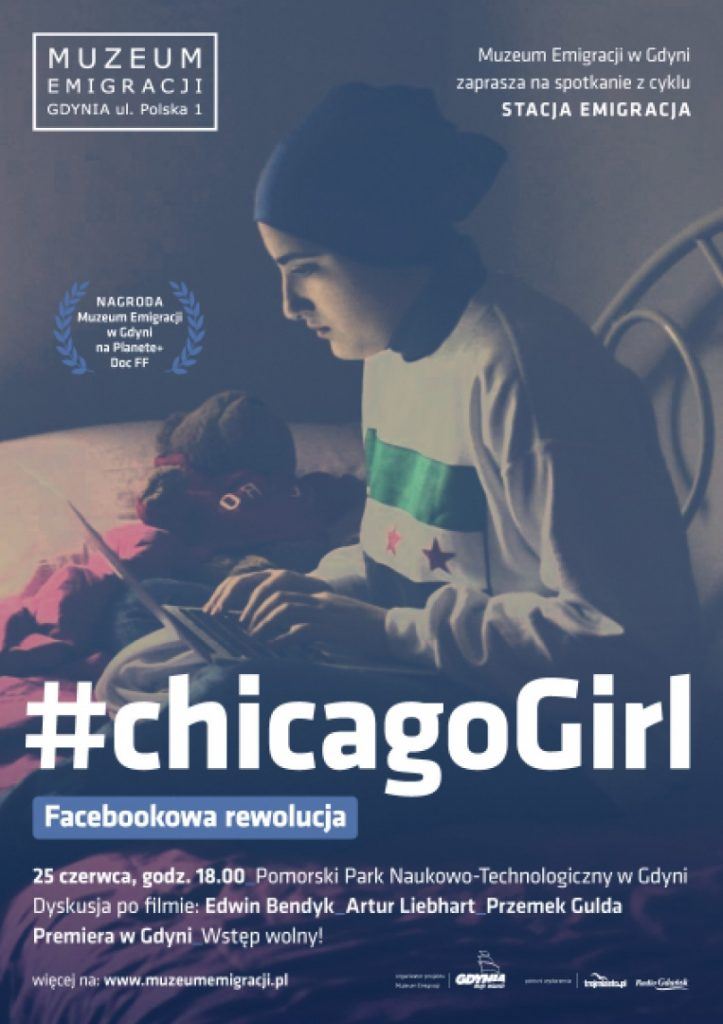 The Emigration Museum in Gdynia invites you to the premiere screening of the documentary entitled „#chicagoGirl – a Facebook revolution”, directed by Joe Piscatella. The picture has won the Emigration Museum in Gdynia Award for a film about migration, presented for the first time during the Planete+ Doc Festival by the jury consisting of Andrzej Kołodyński, Karolina Grabowicz-Matyjas, and Maria Zmarz-Koczanowicz. After the screening we invite you to join the discussion about the picture’s portrait of present-day emigrants and the role new technologies play in their lives. The meeting – moderated by Przemysław Gulda – will also feature Artur Liebhart, Director of the Planete+ Doc Festival, and Edwin Bendyk, journalist of “Polityka” magazine. The event will be held as part of the Emigration Station series on June 25 in the Pomorski Science and Technology Park in Gdynia.

The winning film’s protagonist is Alai Basatneh, a teenager of Syrian descent living in the United States. She assists in the co-ordination of activities of Syrian revolutionaries through social media. The inner strength of the young emigrant is accompanied by the brilliant, perfect use of new technologies that have redefined the status of an emigrant. Despite the thousands of kilometers that separate her from her homeland, in her hands she has the power to change its fate. One of the jurors, film critic Andrzej Kołodyński, emphasized that “it is a dynamic picture, a film documenting what is happening day by day. It’s hard to overrate the importance of this recording. It’s also hard not to appreciate its emotional power.” Maria Zmarz-Koczanowicz, film director and juror, noted that “viewers see the events through her eyes, in a way that’s all too familiar to us – through a computer screen, and this is what proves to be the most intense experience.”

The Emigration Museum Award was established in order to single out the films that open a discussion on the meaning of emigration in the modern world and its influence on society and people. Joe Piscatella’s picture shows us that a person leaving their homeland continues to be connected to it with thousands of invisible ties – personal, familiar, cultural. “There are roughly 200 million migrants in the world today – says Karolina Grabowicz-Matyjas, Director of the Emigration Museum in Gdynia – and the phenomenon itself turned into one of the differentiators of the era of globalization. Our institution – despite being focused on the history of emigration from Poland – participates in the discussion about the problems of modernity”

#chicagoGirl – The Social Network Takes on a Dictator

Ala’a Basatneh is a charismatic nineteen year old, who since 2011, has been helping in the coordination of the revolution in Syria using her laptop computer. She was born in Damascus, but moved with her parents to the United States as a young girl and presently lives in the suburbs of Chicago. Her actions take advantage of social media, which have proven to be an important factor supporting the Syrian revolution. She has 1200 friends on Facebook, her Twitter profile is followed by 2000 people. This is how she promotes the actions of Syrian revolutionaries in the world. She publishes demonstrations as Facebook events, uses Google Maps to inform people about their routes, and publishes materials recorded by protesters on her web page. She also makes sure they have the right recording equipment at their disposal – sends them mini cameras in packages she prepares. She has no time for her friends or her hobby, because her every free moment is spent on supporting opposition activities against Bashar al-Assad’s dictatorship. We also get to know several of her revolutionary friends in the movie – a young journalist Mazhar Omar Tayar and a young filmmaker Basel Shahade who died during riots, and Aousa al Mubarak who is still alive. We learn about experts’ opinions on the conflict in Syria, among them jounalists Kurt Andersen and Clay Shirky, lecturer Zeynep Tufekci, and programmer David Gorodyansky. This allows us not only to see a moving image of heroism and courage of a young girl devoted to supporting the opposition in her homeland from a country far away, but also an interesting analysis of the conflict in Syria and of the role internet plays in it, especially social media. [distributor’s synopsis]

Participants of the debate

Edwin Bendyk – journalist and publicist interested in problems of civilization and the influence of technology on social life. Currently working at “Polityka” weekly.