Reporter on the road… 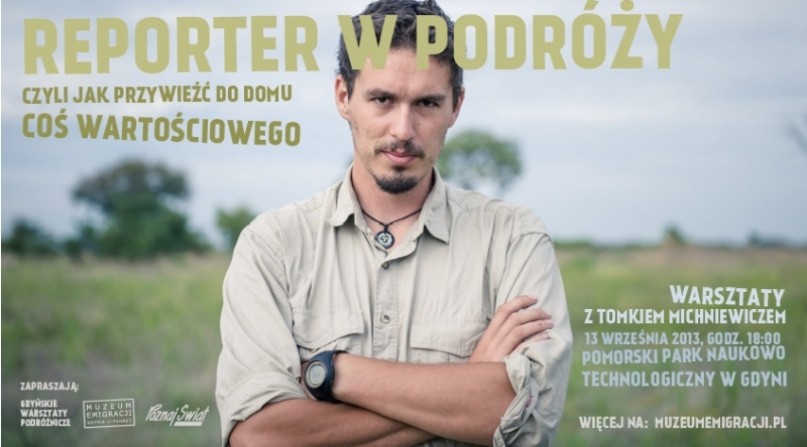 …or how to bring home something of value.

Travel workshops taking place as part of the Paweł Edmund Strzelecki Award will be conducted by Tomek Michniewicz.

What are the guidelines for choosing the subject of a report and for preparing something unique? What is the easiest way to gain the trust of your interlocutor? And finally – why is it worthwhile during your travels to meet not only foreigners, but fellow countrymen as well?

We heartily encourage you to participate in Gdynia Travel Workshops, which will take place on September 13, 2013 in the Pomeranian Science and Technology Park in Gdynia. The meeting will be conducted by Tomek Michniewicz – one of the most recognized promoters of travel, a journalist, a radioman, and the author of bestselling publications.The meeting will serve as an introduction to the Paweł Edmund Strzelecki Award competition, organized by the Emigration Museum in Gdynia.The competition lasts until January 10, 2014.

During the workshops, this popular traveler will recount his experiences throughout different journeys.But, above all, he will focus on imparting to participants the knowledge necessary to traverse wisely and safely unknown parts of the world in search of unique subject matter.The participants will find out how to choose something unique and attractive to an audience, as well as how to successfully collect the data required to create an interesting report.They will learn methods on how to work with another human, how to gain their interlocutor’s trust, and how to conduct an interesting interview.

The biggest asset of the workshop is its focus on the practical aspect of field work: how to effectively use collected material and how to deal with its deficiencies and imperfections, how to start and when to finish. There will also be a word on questions of ethics: what is it that reporters owe to the people they meet?And there will be numerous anecdotes worth telling your friends.In the end, not everybody knows why coconut palms are more dangerous than sharks…

The workshop may be a start of an unusual journey – participation in the Paweł Edmund Strzelecki Award competition focusing on a documented interview with a remarkable countryman met on the road. After all, travels present us not only with opportunities to learn about exotic new cultures, but also allow us to better understand our own.”We wish this competition to serve us as means of popularizing the subject of emigration and drawing Poles’ attention to the life of Polonia, its achievements and successes,” as Karolina Grabowicz-Matyjas, Director of the Emigration Museum, explains the idea behind the award.”At the same time, we wish to promote ‘Polishness’ as a remarkable phenomenon of people, who could accomplish their plans, ambitions, and dreams anywhere, an element of energy and optimism, open to the world, to new places, and new people.”

This riveting event has already gained the interest of people distinguished in the field of Polish travel and journalistic traditions.The jury features such individuals as the polar explorer Marek Kamiński, the outstanding photographer Chris Niedenthal, and the principal presenter of the workshop Tomek Michniewicz.Those who are still undecided might consider the 5000-złoty prize as additional motivation to participate in the competition.

Media patronage has been sponsored by the monthly “Poznaj świat”, which has prepared free subscriptions to the magazine for all the participants. Participation in the workshop is free of charge.

Tomek Michniewicz – juror of the Paweł Edmund Strzelecki Traveler’s Award, journalist, backpacker, photographer, radioman, and activist.Author of two bestselling accounts: “Samsara — On Nonexistent Roads”, and “Fever — In the World of Treasure Hunters”.Chief editor of the traveler portal KoniecSwiata.net.Known for his work with Polish Radio Programs 1 and 3, and formerly a journalist for Polityka, and Polish Radio Bis, among others.Recipient of four awards from the Mediatravel festival of civilization and media art.Nominee for awards by National Geographic and Traveler.

Gdynia Traveler Workshops – a series of meetings focused on the subject of travel, which has been attracting professionals and amateurs since 2011.The Polish Scouting and Guiding Association is the main organizer of the workshops financed by the City Hall of Gdynia. The Association is represented by the travelers Karina and Marcin Stencel – a married couple of scouting instructors, who have spent the last 3 years almost exclusively on the road.