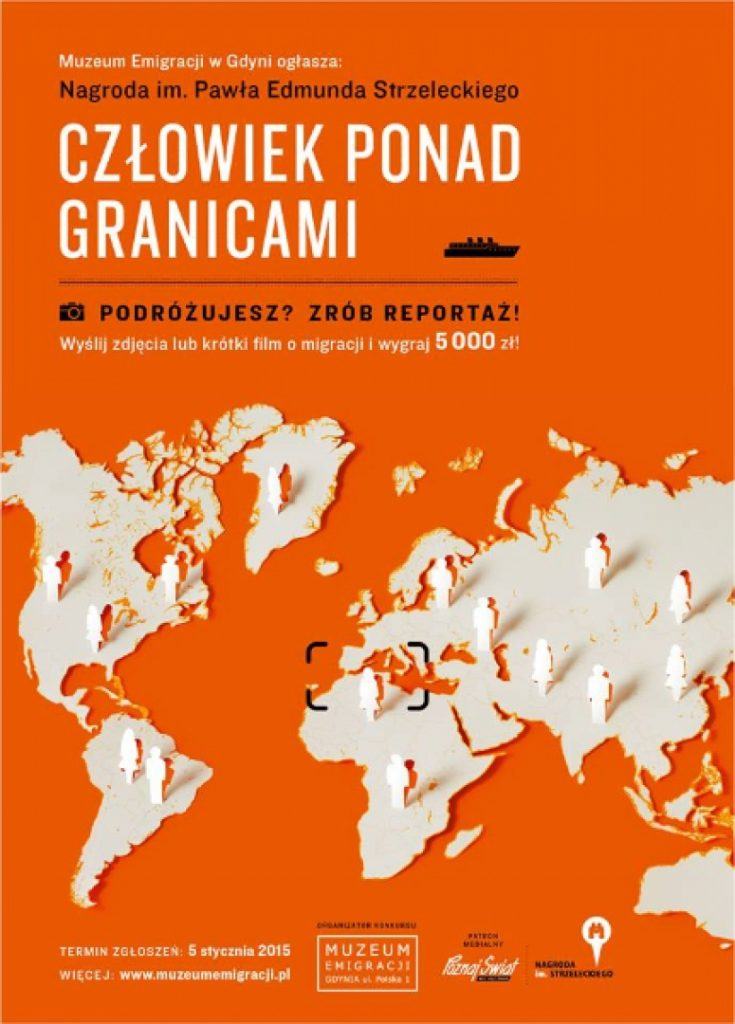 „A man beyond borders”

Over 200 million – that’s how many people all over the world are presently affected by the phenomenon of migration. People cross borders for various reasons, but there is a unique story hidden behind each and every one of them. How to show the multidimensionality of migration and not to lose sight of the most important one of them – the personal one? This is the task the Emigration Museum in Gdynia has set for the travelers in the second edition of the Paweł Edmund Strzelecki Award – this time organized under the banner of “A man beyond borders”. The author of the best film or photo report will win the main prize of 5 000 PLN and will have a chance to present it to the audience of the National Meeting of Travelers, Sailors, and Mountaineers KOLOSY in Gdynia.

Traveling, increasingly popular among Poles, regardless of whether we talk about the backpacker-globetrotter-type undertakings which aim to avoid touristic destinations or the all-inclusive ones, to many are a way to actively seek out knowledge about the world and its people. Through its competition headline, “A man beyond borders”, the Emigration Museum in Gdynia wishes to encourage you to consciously observe the multicultural character of the places you visit. How do emigrants find their way in their new realities? What are their life stories? What values do they add to their new home?

Migration is an extremely versatile subject – the latitude of the new place and that of the migrant’s home country, their biographies, personalities, passions are all but a fraction of all the factors that may influence the subject of a story submitted to the Pawel Edmund Strzelecki Competition. The Organizers will not impose any limitations on the participants in terms of how their chosen subject should be approached – portraits of selected persons, as well as reports attempting to approach the phenomenon of migration from a wider, less obvious perspective are all valuable to us. The main criterion for the selection of the winner will be the uniqueness of the story and its importance, the assessment of technical and production values is secondary. No need for professional equipment – anyone can join the competition, just send us your photographs or a short film.

The first edition of the competition took place under the headline “Get to know your fellow countryman!” and it required the participants to submit a report about a Polish emigrant. This time around the subject is wider and it aims to present Polish emigration experiences in a broad, international context – the mission of the Emigration Museum in Gdynia is to popularize the history of Polish emigration and we conduct this task with full awareness of the universal character of this phenomenon. Migration is a natural process – it’s been with us forever and everywhere: in the Ancient World, the Middle Ages, 19th century. Today – similarly to the past – this phenomenon takes place simultaneously on all continents, it changes fates of millions of people and their families, but it also influences societies and cultures that receive immigrants. We are very curious of the stories submitted to the competition, because we too are part of the world in constant migration – explains Karolina Grabowicz-Matyjas, Director of the Emigration Museum in Gdynia.

Works may be submitted until January 5, 2015. Please take a moment to get acquainted with Terms and Conditions of the competition [READ].

The Award’s patron is personified by Paweł Edmund Strzelecki – the first Pole to attempt an individual expedition around the world, distinguished geographer whose travels impress with their reach and grandeur even today. His most important discoveries were made in Australia – he described new lands and mountain ranges, identified deposits of coal, oil, and gold. He meticulously studied the highest mountain range of the continent – the Great Dividing Range. He named its highest summit Mount Kosciuszko.