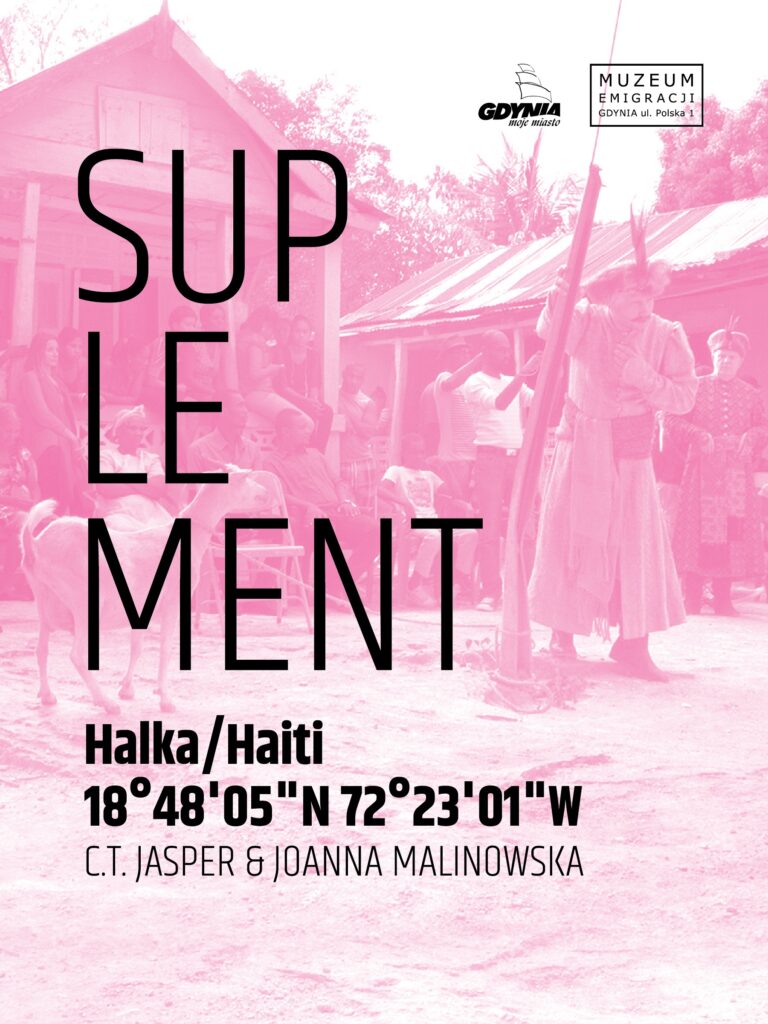 We are beginning a new cycle at the Emigration Museum entitled “SUPLEMENT”, where we present works by visual artists dealing with the theme of migration.

Polish emigration history is not a concluded chapter. Every day, year after year, decade after decade, new themes and contexts emerge which relate to the movement of the Polish people around the world. In recent years we have gone from being a country of emigrants to a country that welcomes immigrants. The issue of significance of historical and contemporary migrations has often been reflected upon by artists. We invited several of them to collaborate on the “SUPLEMENT” project, so that through their works they would complete the narrative of migration told in the permanent exhibition. As part of the series, three artistic interventions will be held over several months, to be included as a temporary part of the permanent exhibition at the Emigration Museum in Gdynia.

The first to be featured is the C.T. Jasper’s and Joanna Malinowska’s multi-channel panoramic video installation “Halka/Haiti. 18°48’05”N 72°23’01”W“, which was screened in 2015 in the Polish pavilion at the Venice Art Biennale. The work is a documentation of “Halka” by Stanisław Moniuszko, staged for the local community in Cazale, a village in Haiti. It is still inhabited today by the descendants of Polish soldiers from Napoleon’s legions, sent by Bonaparte in 1802 and 1803 to help quell the rebellion of African slaves in the then colonial San Domingo. The Polish soldiers eventually defied their commanders and joined the local insurgents. Within two years the French army was defeated. In recognition of the contribution of the Polish soldiers, the constitution of free Haiti granted them special privileges, making them equal to the Afro-Haitian citizens of the republic and permitting them to establish their own settlements. Contemporary residents of Cazale refer to themselves as Le Poloné and carry the local versions of Polish surnames.

The next editions of “SUPLEMENT” will feature “Cel pobytu” [Purpose of Stay] by Yuriy Biley and “Że Cię nie opuszczę” [The Wedding] by Lesia Pczołka and Uladzimir Hramovitch. The title of the project “Cel pobytu” [Purpose of Stay] refers to the question the artist is asked when crossing the border of another country. It also refers to the emigration of objects that join him in his new environment. It is these objects, which have been migrating with him, sometimes throughout his life, and which are now accumulated in his new home in Wrocław, that we will be able to see at the exhibition at the Museum. “Że Cię nie opuszczę” [The Wedding], on the other hand, will be a performance, referring to the role of contemporary public institutions in the processes of granting or depriving migrants of basic civil rights.

Emigration Museum in Gdynia / the last hall of the permanent exhibition, Polska 1

The permanent exhibition at the Emigration Museum opens with a fragment of “Popioły” [The Ashes], by Andrzej Wajda. The scene set in 1797 depicts marching soldiers of the Polish Legions in Italy singing the song known today as the “Mazurek Dąbrowskiego” [Dąbrowski’s Mazurka]. The legionnaires living in exile who fought alongside Napoleon believed that thanks to him they would one day return to an independent Poland. The price was to be unconditional obedience and full loyalty in the French-led battles.

In 1802 and 1803, soldiers were sent to the island of San Domingo, present-day Haiti, to quell an uprising of the island’s enslaved inhabitants of African descent. Initially fighting on the side of the French, the Poles began eventually to switch their allegiance to the Haitian side and support them in their fight for freedom. In recognition of the contribution of the Polish soldiers, the constitution of free Haiti granted them special privileges, making them equal to the Afro-Haitian citizens of the republic and permitting them to establish their own settlements.

The work of Joanna Malinowska and C.T. Jasper is a documentation of the opera “Halka” by Stanisław Moniuszko, staged at Cazale – a village in Haiti established by Polish legionaries, where their descendants reside to this day. The opera tells the story of the tragic love of a Polish Highlander girl who is seduced and betrayed by a young nobleman. The work was a response to events surrounding the history of the unsuccessful 1848 Kraków uprising against the partitioners, and at the same time it pointed out the class tensions between the Polish landed gentry and its rural peasant underclass.

Staging “Halka” in Haiti, the first republic to be liberated from European rule, highlights the shared experience of oppression and of the fight against the oppressors. It addresses historical and contemporary forms of coercion and exploitation in ways that are not obvious. It also exposes the global mechanisms of political doctrines based on exploiting some nations in order to marginalize, exclude, or destroy others. The objective is always the same – to assert superiority, preserve privileges and consolidate power.

‘Halka/Haiti 18°48′05′′N 72°23′01′′W’ was produced by Zachęta – The National Gallery of Art in Warsaw for the Polish Pavilion at the 56th Venice Biennale, curated by Magdalena Moskalewicz.

‘SUPLEMENT’ is a curatorial exhibition series featuring works by visual artists dealing with issues of exclusion and prejudice in the migration process. The artists invited to the project present works that constitute a certain kind of artistic intervention into the space of the permanent exhibition at the Emigration Museum. The works complement the content of the exhibition with relevant and up-to-date themes, phenomena and events that are part of the current and ongoing debate on the role of historical and contemporary migrations.

The story presented in the permanent exhibition cannot be contained within a single narrative. Movement, as a permanent component present throughout the history of humanity, is a fundamental driver of change in our world. From the very beginning, mobility and migration have shaped the reality around us; the society we live in and the relationships we form within it. Over the last 20 years, we have experienced huge changes in the dynamics and scale of migration, its causes and directions. We went from being a country of emigrants to a country that welcomes immigrants. From a country which people would leave in search of a better life, we have become a country where people come in search of such a life.

We are witnessing the creation of a new chapter in the narrative of several centuries of migration from the Polish territories. The change that has taken place within this chapter calls for a reconsideration of our role and responsibility towards the newcomers arriving in Poland from different countries.