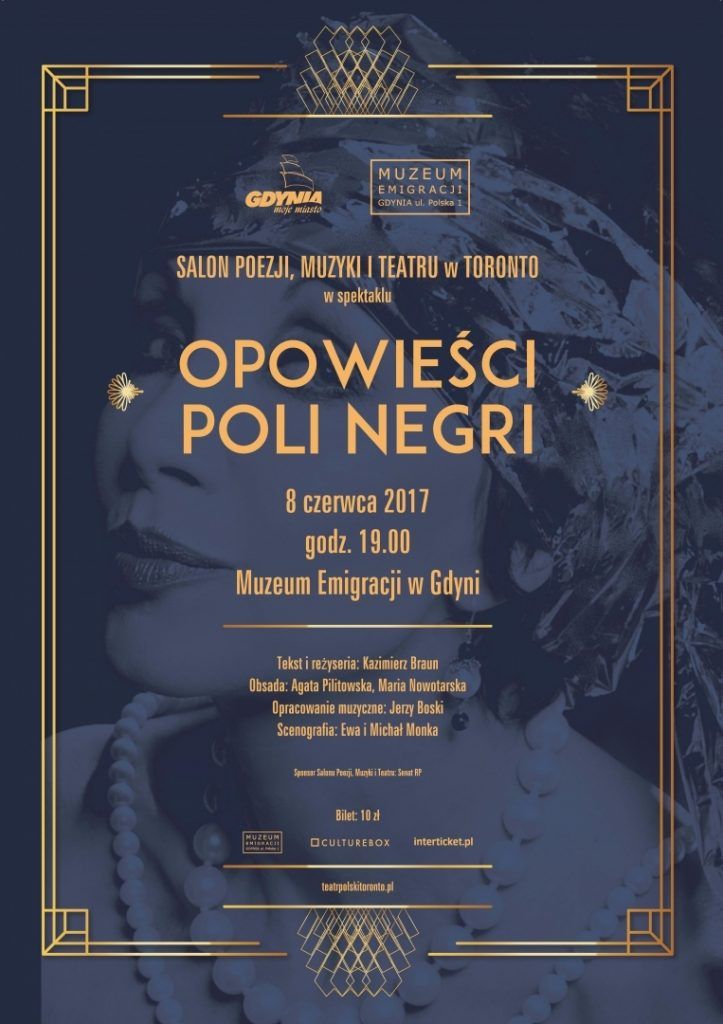 A play about Pola Negri, the Hollywood film star, the pop culture icon of the first decades of the 20th century, will be staged at the Emigration Museum in Gdynia on June 8, at 7 PM. The role of the famous Polish emigrant will be played by Agata Pilitowska of The Salon of Poetry, Music and Theatre in Toronto. The performance of the largest Polish theatre on emigration precedes the exhibition about the history of Poles in Canada, which the Emigration Museum will open on July 1.

Pola Negri (born Apolonia Chałupiec in Lipno near Torun) is the third great Polish emigrant who became the heroine of the monodrama by Kazimierz Braun, following Helena Modrzejewska and Maria Skłodowska-Curie. The author of “Tales of Pola Negri'” sketches a portrait of not only the artist and heroine of many scandals but, above all, a person with a unique personality.

The play written by an emigrant director about an emigrant Pole is played by an emigrant actress. Portraying Pola Negri Agata Pilitowska is a graduate of the Ludwik Solski State Drama School in Cracow. Since 1986 she has lived in Toronto, Canada, and since 1992 she has been associated with the Toronto-based Salon of Poetry, Music and Theater established by Maria Nowotarska, where she starred in over 100 productions. The most important of which include dramas written especially for her and Maria Nowotarska: “American Dreams”, “Tamara L.”, “Radiation” and, of course, “Tales of Pola Negri”. The performances were played in many cities in Canada, United States and Europe. On June 8 ” Tales of Pola Negri'” will be played at the Emigration Museum in Gdynia.

Tickets for the show priced at 10 PLN will be available from June 1 at the Museum ticket office, Gdynia CultureBox and on-line at: interticket.pl.

The Polish Theatre in Toronto, officially known as the George Pilitowski Salon of Poetry, Music and Theatre of the Polish-Canadian Music Society was established in 1990 as an initiative of Jerzy Pilitowski and Maria Nowotarska, an actress having professional collaboration experience with Erwin Axer and Kazimierz Dejmek. Thanks to the artists’ commitment and effort, the theatre has been strengthening its artistic position year after year, and currently it is the only emigrant theatre in the world that for the last 20 years has been releasing several premieres every year. The theatre has produced over 100 shows and gone on over 250 international tours promoting Polish culture in the world. The theatre website: www.teatrpolskitoronto.com.

The visit of artists from Canada precedes an exhibition organized by the Emigration Museum in Gdynia entitled “Poles in the Canadian mosaic. 150 years of history”. On the 150th anniversary of the birth of Canada, the Museum in cooperation with the Embassy of Canada in Warsaw prepares an exhibition showing the presence of Poles in Canadian history and present. The Vernissage will be held on 1st July. More information about the exhibition soon.

“Tales of Pola Negri'” | Spectacle by The Salon of Poetry, Music and Theatre in Toronto

Written and directed by: Kazimierz Braun