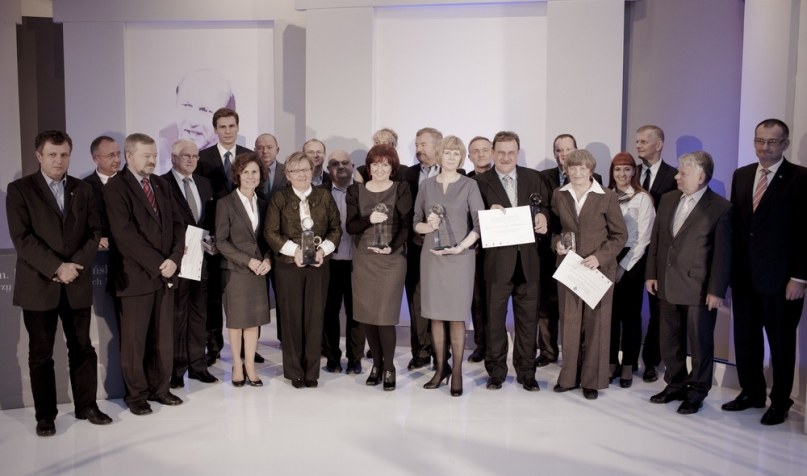 The Maciej Płażyński Award has been handed for the first time. Journalists from Poland, Lithuania, the Netherlands and the United States became the prizewinners of the first edition. In addition, journalists from Russia and Germany have been distinguished. The Jury have chosen the winners out of 55 nominations sent from all over the world. The event coincided with 15th anniversary of Maciej Płażyński’s appointment as the Marshall of Sejm.

In the “Journalist of Polonia media” category, the prize was awarded to Barbara Sosno from “Znad Wilia” radio, for the series of broadcasts dedicated to the issue of Polish schooling in Lithuania.

In the “Domestic journalist writing about Polonia” category, Jolanta Roman-Stefanowska was rewarded from TVP Gdańsk – the author of TV reports on the subject of Poles living in Kazakhstan and Russia.Additionally, the Jury awarded special mention in this category to Piotr Cywiński from the weekly magazine “Uważam Rze” for professional and uncompromising handling of difficult subjects in his articles “Mutiny of desperados” and “Porter of burdens”.

In the category of “Foreign journalist writing about Polonia” the prizewinner was Małgorzata Bos-Karczewska – author of publications in “NRC Handelsblad” on the subject of government plans to expel unemployed Poles from Holland, which sparked a discussion in Dutch and world media about the treatment of Polish immigrants in Holland.

“Polish Daily News” of New York won the prize in the “Editorial staff of Polonia media” category – awarded for their modern and professional journalism in service of the American Polonia. Additionally, the Jury distinguished in this category the editorial staff of the bimonthly magazine “Dom Polski” published in Tornsk, for their support of Polish traditions in Siberia and Russia.

The Maciej Płażyński Award has been established in order to honor the work of journalists and media serving Polonia and contributing to retain the patron’s legacy in the memory of Poles – says the first paragraph of its statute. The word “serving” isn’t coincidental. It is permanently inscribed within journalist profession, and very distinctive in the work of all the prizewinners and those who had been nominated. We hope this award is not only an expression of our gratitude and recognition for your service, but will also serve as a testimony of the importance of what you do. Thank you for that! – said Marcin Lewicki, the Chairman of Press Club Polska.

The prizewinners were selected by the Jury comprising of: Jakub Płażyński (Chairman), Andrzej Grzyb (Senator of Republic of Poland, Representative of the Marshall of Senate), Jarosław Gugała (Polsat Television), Jerzy Haszczyński (Rzeczpospolita Newspaper), Małgorzata Naukowicz (Polskie Radio) and Karolina Grabowicz-Matyjas (Director of the Emigration Museum, Secretary of the Jury).

The Maciej Płażyński Award honors the work of journalists and media serving Polonia. It is the initiators’ intention to preserve in the memory of Poles the silhouette and legacy of the patron –an activist of the anti-communist opposition, the first non-communist voivode of Gdańsk, the Marshall of Sejm of Republic of Poland and the Vice-Marshall of Senate, the Chairman of Polish Union Association, a man of wide horizons and forward-thinking attitude to Poland and to the world.

The prize in the three journalistic categories constitutes of a statuette and a financial reward of 10 000 PLN, whereas in the “Editorial staff of Polonia media” category it is a statuette.

The Maciej Płażyński Award was initiated by Press Club Polska, Jakub Płażyński, the presidents of Gdańsk, Gdynia, and Sopot, the Marshall of Pomorskie voivodeship, and the Pomorskie Foundation. The Award is handed under the honorary auspices of the Marshall of Senate of Republic of Poland and the Minister of Foreign Affairs.