The Tractoriad – by Ursus across South America 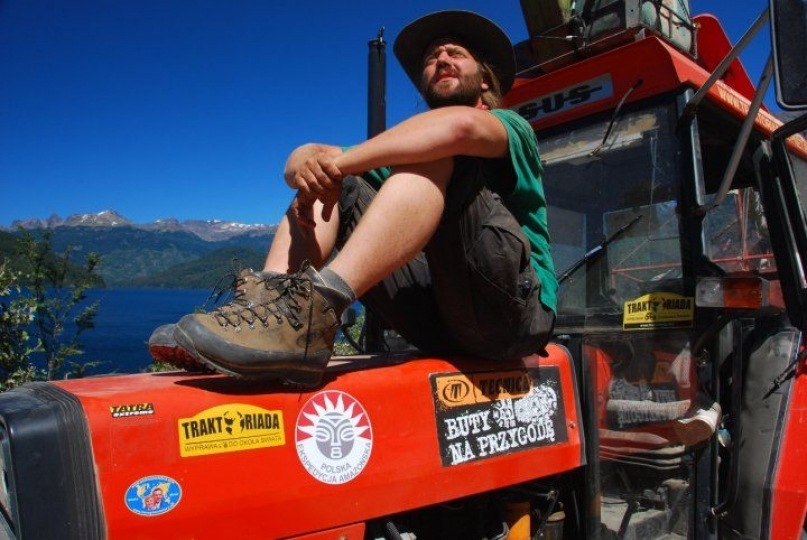 With four-wheel drive, 82 horsepower under the bonnet and a maximum 50 km/h downhill in neutral through the Amazonian jungle, snowy Andean passes, the largest salty lake in the world, the hot Atacama Desert, fields of geysers and the immense Pampas … On Wednesday, 9 December at 17.30 at the Emigration Museum in Gdynia, Marcin Obałek will talk about his journey by tractor across South America. Admission free.

We would like to invite you to the third meeting in the series of meetings with travellers at the Emigration Museum in Gdynia. This time our guest will be Marcin Obałek who will talk about the unusual journey he took by tractor across South America. And not just any tractor at that but the pride of Polish technological thought – the Ursus 6014! Amongst others, the journey has led to the initiation of archaeological work in the Bolivian Amazon and the discovery of intriguing and previously unknown locations and sites. Marcin Obałek will also talk about the successes of the Polish Amazon Expedition i.e. a long-term archaeological expedition into the Bolivian jungle, as well as the Polish traces which he came across during his travels and the surprising Polish-related friendships he struck. The expedition, which started in 2002, has been extended by further stages during which the Ursus has covered over 20,000 kilometres of roads, meadows, fields and wasteland of Urugway, Argentina, Bolivia, Chile and Peru.

Native of Poznan, resident of Grunwald. Traveller, trip organiser, tour guide, defender of nature, chairman of the “Czysty Świat” Association and member of the board of the Fundacion Munde Puro in Bolivia. Glorifier of Polish technological thought, originator and head of the Tractoriad – an Ursus Expedition across South America and the expedition “On Horseback Around the World”. The most noteworthy of the numerous journeys he has embarked on in the recent years are “Along the Silk Route to India” and the Trans-Saharan expedition to Senegal and Mali. Originator, co-organiser and head of Polish archaeological research in Bolivia with the Amazon Expedition. A National Geographic Traveler Award nominee, laureate of the Travel Film Festival in Sopot, quartermaster of a dugout on the Beni River and owner of a small field with a couple of banana trees in the Yungas, organiser of the Podlachian Festival of Cultures and Travels ToTuToTam. On an everyday basis he is involved in environmental education and … the planning of further mad expeditions.

Meeting travellers at the Emigration Museum

Each month the Museum hosts exceptional people who during their expeditions have visited places connected to Polish emigration. You can not only hear stories about the extreme aspects of their exotic journeys but also about Polish traces and stories related to Polish people encountered by our guest speakers in the remotest corners of the globe.

So far the Museum has hosted Tomasz Grzywaczewski, who told us about his journey across the Wild East in the footsteps of 1941 Soviet camp escapees, and Norbert Skrzyński, co-organiser of the “Afryka Nowaka” expedition which popularises the person and achievements of the traveller Kazimierz Nowak.