Vernissage of THE DISPERSION. Emigration of March 1968 exhibition 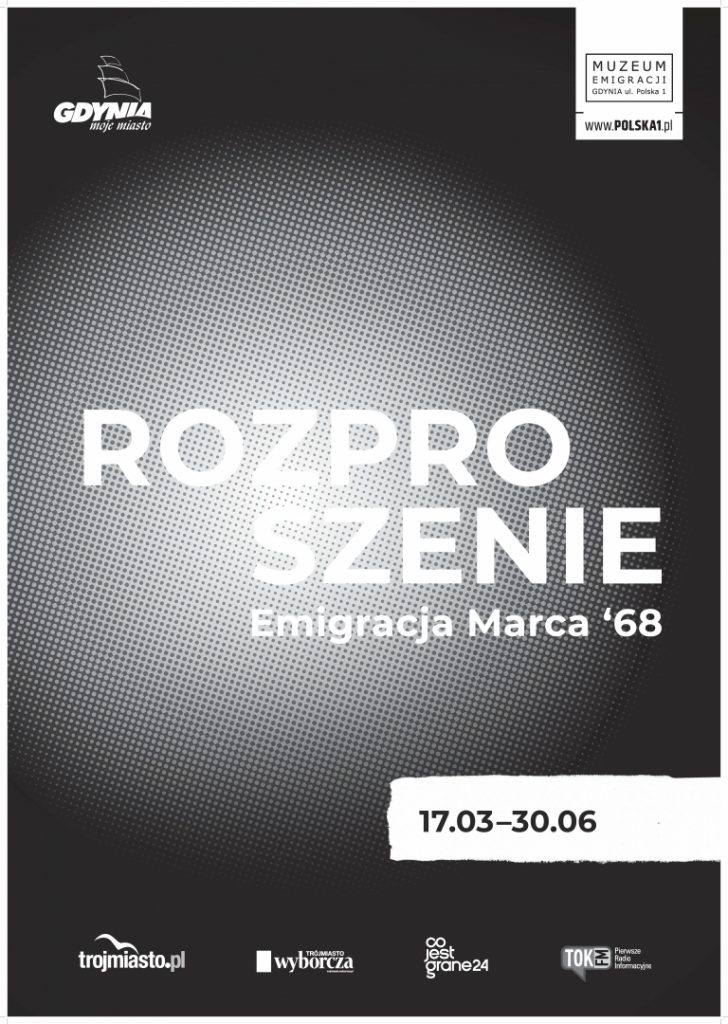 We invite you to the vernissage of the exhibition on March, 17 at 5 PM to the Emigration Museum in Gdynia.

On the 50th anniversary of the March events, the Emigration Museum in Gdynia prepared the DISPERSION. Emigration of March 1968 exhibition. It is a many-voiced story of the generation for whom March 1968 became a prism that shattered the society into thousands of dispersed individuals.

The authors of the exhibition focused primarily on the analysis of the complex reasons which led to the situation in which, under the pressure of propaganda manipulations, the 1968 generation faced a dramatic choice to leave or to stay in Poland.The individual decisions to leave, attitudes in the face of the increasing hostility, stories of rebuilding identity after receiving the document which deprived of the citizenship, told by the voices of the witnesses of history create a multi-layered narrative about the fate of the dispersed generation.

Visitors will hear the accounts of the emigrants, read hastily prepared news of Radio Free Europe, see secret party documents, and recreate the atmosphere of the March events on the basis of the participants’ statements. The culmination of the exhibition is Krystyna Piotrowska’s artistic installation “I left because…”, which emphasizes the individuality of every single decision on emigration. Various forms of telling stories about March 1968 are a way to merge the voices of thousands of people in a picture of the generation forced to farewells.

THE DISPERSION. Emigration of March 1968 exhibition has been created in order to present another card of the Polish emigration history and to ask questions about our attitudes towards it.What history lies behind the surnames from “travel documents” stating that the bearer is no longer a citizen of Poland? Bauman, Kołakowski, Kamińska, Eile, the generation of March 1968… What would their lives look like if they had not been dispersed? What are the consequences of the sudden departure of over 11,000 citizens for the Polish culture and science?

In order to remind of the reasons, repercussions and the course of the March events, with particular emphasis on the emigration stories, we also invite you to the programme accompanying the exhibition.Throughout March, the Emigration Museum in Gdynia will host meetings with book authors and organize screenings of documentary films discovering the subsequent threads of the history of March 1968.

THE DISPERSION. Emigration of March 1968 exhibition will be available for visiting in the space of the Transit Warehouse of the Maritime Station in Gdynia until June. Admission to the temporary exhibition and all accompanying events is free.