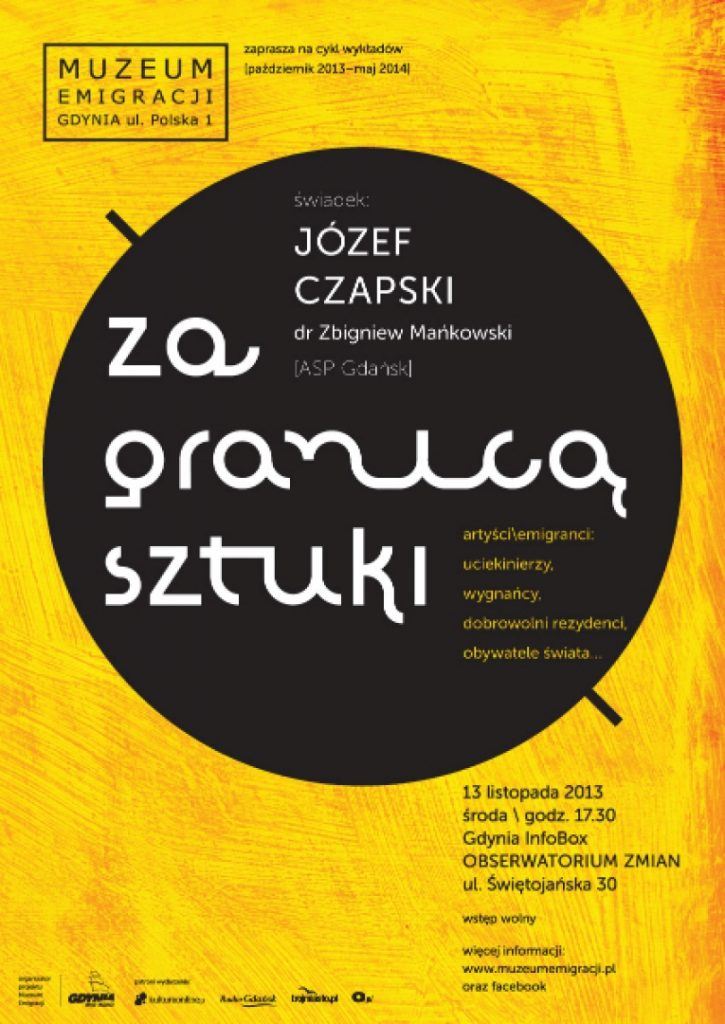 We kindly invite you to the second meeting of the “Beyond the Borders of Art” cycle.

THE EMIGRATION MUSEUM IN GDYNIA invites you to a new cycle of lectures:

Over the course of the next eight months we would like to introduce to the eight public Polish emigrant artists, whose works not only went beyond the limitations of art and opened the world to new ideas, but also touched on important questions about the limitations imposed by philosophy, environment, and the generation gap. The new series of lectures – entitled BEYOND THE BORDERS OF ART – is a splendid opportunity to get acquainted with works of the great, yet often unknown, Polish emigrant artists in various genres, be it painting, film, sculpture, or architecture. We will visit the various destinations of artistic voyages, as well as attempt to understand the unique situation of an emigrant artist. We will, therefore, get to know not only the creators, but also the escapees, outcasts, voluntary residents, and citizens of the world… After the great success of our first meeting, we take this opportunity to invite you to the next one, which will take place on November 13 also at the InfoBox of Gdynia. This time around Józef Czapski will be our protagonist – painter, intellectualist of worldly proportions, whose personal experience stretched from the “inhuman ground” of Soviet camps all the way to the oasis of Parisian “Culture” that he co-founded.

The concept and the content of the BEYOND THE BORDERS OF ART project has been developed by Hubert Bilewicz Ph.D, who describes the cycle in these words:

“Although modern art no longer has any borders, artistic life in the 20th century was defined by many different kinds, such as those of countries, societies, generations, ideas, and style… Topographic borders constituting artistic geography have demarked artistic centers and provinces, and European metropolises have always drawn artists from the countryside. The cosmopolitan or international formula of artistic life was overlapped not only by geopolitical and national entanglements but also by local experiences and individual fortunes. However, other borders had an equal importance in the arts of the last century: borders of professed creative philosophies, of cultivated disciplines, or of the artistic media used. The issue of Polish presence in modern international art brings up questions about the range and importance of Polish artists’ participation in the international art circuit, as well as questions concerning the character and the reach of Polish art. The importance of an artistic presence obviously cannot be merely reduced to a ranking of the popularity of creators assessing their careers according to commercial success or celebrity status. In this cycle of lectures, we attempt to point out selected visual artists and ambiguous phenomena, both international and domestic, that were particularly important for the art of the 20th century, all the while trying to avoid both Polish bias and megalomania. On numerous occasions we will speak not only of Paris – incessantly attracting international artists — but also of artists active in the United States, Canada, Great Britain. Emigrant artists, whose lives and creative output were stretched between Poland and the world, will, however, remain the main protagonists of these meetings: escapees, outcasts, voluntary residents – how they are curious about the world yet tormented by nostalgia; how they assimilated into new environments or were alienated by them; those who remain abroad or returned home; citizens of the world…”

Zbigniew Mańkowski Ph.D – who will conduct the lecture on Józef Czapski – encourages you to participate:

“During the emigration that took place after the end of World War 2, we identify ourselves with the best of human, patriotic, and artistic virtues. A Pole – descendant of a baronial family with ties to the best of European clans; a patriot – engaged in all the most important Polish patriotic and freedom uprisings: from the Polish-Soviet War of 1920, where his verve and courage earned him a Virtuti Militari medal, to participation in 1939 Defensive War, during which he was imprisoned in Soviet camps. After the war, he undertakes the difficult task of finding soldiers and officers lost in the Soviet Union. Czapski penned some of the best sketches and essays on the art of the 20th century. Furthermore, they were written with a very particular language – the so-called “czapski language” – vibrant, characteristic only for him, full of interpolations and digressions referring to the wealth of cultures he carried inside him – German, French, and Russian. His Russian and Soviet experiences were expressed in the book “The Inhuman Land” – his magnum opus, the work describing the hell of the 20th century totalitarianism. As Chief of 2nd Corps Office of Publications, he followed the Anders’ Army onto a wartime journey through Iraq, Palestine, and Egypt all the way to Italy. Always dedicated to serve anyone in service of people, always determined to “see the truth”. During the final years of 1940s – while traveling the world, collecting money, and talking about Poland and Poles – with friends he actively co-founded one of the most important institutions of Polish culture in exile – the Parisian “Culture”. He then becomes an institution himself – a man of many human dimensions: history, life, art, writing, friendships with the most important intellectualists of Europe.

When one wants to find Czapski, they must venture to Maisons-Laffitte. All the most important creators of postwar Polish culture go there – to find energy, wisdom, for human righteousness, and for friendship – Czesław Miłosz, Zbigniew Herbert, Andrzej Wajda, the young, infected with freedom, painters in search of the secret of painting, writers, creators of many disciplines in search of what’s important.

Count Józef Czapski of Leliwa was born in 1896 in Pragua, died in 1993 in Maisons-Laffitte in France. Painter, graphic artist, writer, essayist, critic, and a great man of the time he lived in – soldier decorated with Virtuti Militari for his participation in Polish-Soviet War, prisoner of Soviet POW camps during World War 2, soldier of Anders’ Army, major of Polish Army, who searched for lost Polish officers and victims of the Katyn massacre. Co-founder of Parisian “Culture”, intellectualist who met extraordinary individuals of his time along the way: Władysław Anders, Charles de Gaulle, Anna Achmatowa, Albert Camus, André Malraux.

His artistic passion was realized by studying first in Warsaw, later in Cracow Academy of Fine Arts, where he joined the group of kapists – young painters full of enthusiasm and open to the world, who founded the Paris Committee in 1924, which enabled them travel to the world capital of arts. Along with Jan Cybis, Zygmunt Waliszewski, or Artur Nacht-Samborski, he settled down in Paris for a couple of years absorbing the French Post-Impressionism in order to transfer those experiences to Poland later.

He returned to France only in 1946 and became a prominent figure of the Parisian “Culture”, to which he remained connected until this death – also due to his life at the Maisons-Laffitte house by Avenue de Poissy 9, which housed the magazine’s editorial office. His essays were published by distinguished French outlets, such as “Le Figaro Litteraire”, “Preuves”, “Gavroche” and “Nova et Vettera”.

His creative output constitutes of countless portraits, landscapes, flower compositions, still life, figure studies. In his studio – located on the first floor of his house/editorial office – he processed the simplest everyday motifs looking for dramatic tension and expression through a very suggestive play of light and contrastive color. Although his work could be admired at exhibitions in France, Switzerland, Great Britain, Brazil and Belgium, in Poland he remained largely unknown as a painter or as an essayist, and it only became possible to present his rich output after 1989. His “testimonies” constitute of multiple memoirs, but also of essays on arts, religion, and politics, including a monograph on Józef Pankiewicz.